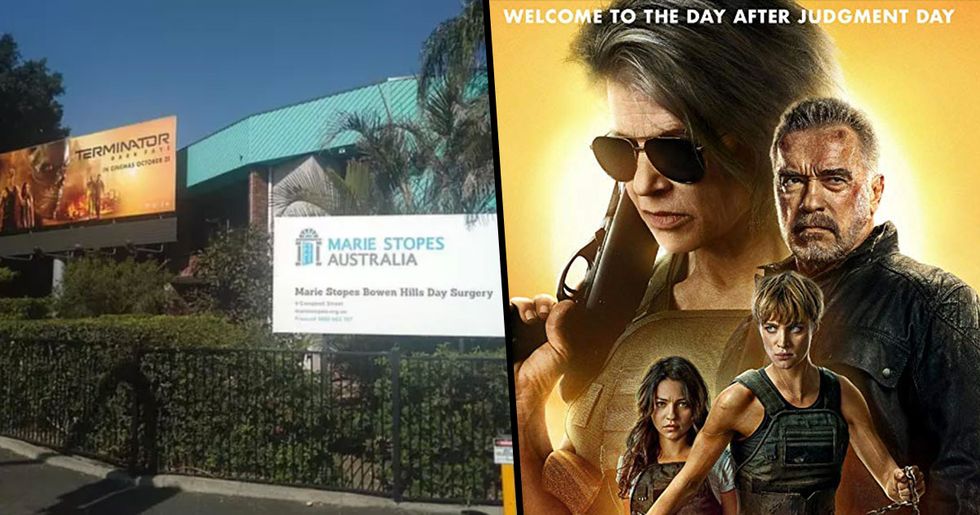 Outrage Over 'Terminator' Billboard Erected Directly Outside an Abortion Clinic

The topic of abortion is a sensitive and extremely divisive one. It's a topic that sparks protests from both pro-life and pro-choice activists and remains a relevant issue to this day.

Women have fought long and hard for the right to choose what happens to their own bodies, so the last thing they want to see when approaching an abortion clinic is a poorly judged movie billboard donning the line "terminator."

Well, staff at an abortion clinic in Australia have been left outraged after a grossly misjudged billboard has been placed outside the clinic. The snap was posted to Reddit and depicted the new billboard for the upcoming Terminator movie erected directly next to the Marie Stopes Bowen Hills Day Surgery in Brisbane.

As ad-placement goes, this hugely miscalculated error has sparked widespread fury among both staff and onlookers...

Here in the US, the right to safe and legal abortion has been the law of the land for more than forty-five years and is a part of the fabric of this country. Brett Kavanaugh’s confirmation to the Supreme Court dealt a huge blow to our right to access safe, legal abortion, however. Kavanaugh was nominated by President Trump, who had previously made a clear promise to nominate judges who would “automatically" overturn Roe v. Wade.

And, of course, the Alabama abortion ban sparked huge outrage and controversy.

May 14, Alabama legislators passed a bill banning abortions. The passing of this bill has triggered an outcry across the world, with millions standing forward in support of women’s rights. Republican, Governor Kay Ivey, said after signing the bill: "The bill stands as a powerful testament to Alabamians’ deeply held belief that every life is precious and that every life is a sacred gift from God."

4 other states have imposed a similar bill.

Over in Australia, the grounds by which abortion is permitted varied by jurisdiction until recently.

In every state, abortion is legal to protect the life and health of a woman, but each has varying definitions of what exactly those circumstances would be.

But, as of this month, all states apart from South Australia have fully decriminalized abortion.

Western Australia was the first to decriminalize abortion back in 1998.

As per the BBC: "The legislation had generated weeks of heated debate and deeply divided the state's conservative government." Previously, abortions were possible there only if a doctor deemed there was "serious risk" to a woman's health.

But there is still a huge stigma attached to the topic.

There seems to be no middle ground.

Often they will protest outside abortion clinics.

Staff at one abortion clinic in Australia have been left outraged this week...

The placement of a suggestive movie billboard outside the abortion clinic has sparked fury amongst the staff who have dubbed it "unfortunate and obviously inappropriate."

The clinic in question is the Marie Stopes Bowen Hills Day Surgery in Brisbane.

The clinic has been operating since 2000 and describes itself on its website as a "proudly pro-choice" clinic that offers women medical and surgical abortion options, as well as "contraception post-abortion, decision-based abortion counseling, and 24/7 aftercare."

But when a poorly judged movie billboard was placed outside it...

The staff and onlookers were understandably appalled.

The billboard was for the new upcoming Terminator movie, Terminator: Dark Fate.

Marking the sixth installment of the iconic sci-fi franchise, the movie is set to hit the big screen later this year.

But, as you can imagine, the word "terminator" used outside the abortion clinic is in massively poor taste.

Though it's clearly a grossly misjudged ad-placement, staff were furious to see that the poster had been placed right outside the clinic.

A snap of the billboard in question has gone viral online.

It was originally uploaded to Reddit with the caption: "This billboard just went up outside an abortion clinic in Brisbane."

Staff are now inquiring to get the poster removed.

According to The Daily Mail, a spokesperson for the Marie Stopes Bowen Hills Day Surgery said staff brought the issue to the center's attention.
"It was through our staff we started to make inquiries to get it removed. It's unfortunate and obviously inappropriate."

The clinic is planning on releasing a whole statement about the controversial poster.

But they won't do so until the investigation into how it came to be put up there is completed.