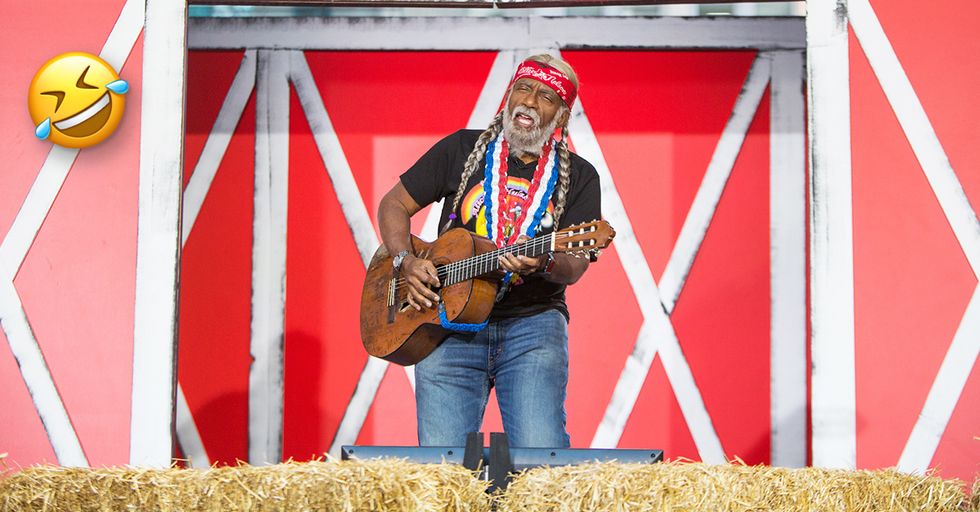 The 30 Most Outrageous, Memorable Celebrity Halloween Costumes Ever

Guess what? It's fall! You know what that means: crunchy leaves, hot apple cider, pumpkins, and (the best part) it's basically Halloween. Have you gotten your Halloween costume ready yet? Are you one of those people who will start planning in July or are you more of last minute type of person? Or maybe *gasp* you don't dress up at all?

Do you know what types of people love Halloween more than anyone? Celebrities. Celebrity Halloween costumes are the best. While all the normal people usually throw together the best thing we can find in our closets, celebs really go all out for the holiday.

Here are some of the best celebrity Halloween costumes over the years. Just try to go through this whole list without craving a fun-size Butterfinger and some toasted pumpkin seeds.

That hair! And those flowers! Really, everything about this costume is amazing.

Gigi Hadid killed it as "Bad Sandy" from Grease.

This costume is so well done that I've got chills, and they're multiplyin'.

Heidi Klum is the undisputed Queen of Halloween.

Last year at her famous Halloween party, she dressed as Michael Jackson from his "Thriller" video.

She brought an actual dog! That is some great Halloween commitment right there!

Kim Kardashian as Catwoman is a look.

Meow! That leather suit must be pretty hard to put on. I give her an A+ for true effort!

Kelly Ripa and Michael Strahan dressed up as Katy Perry and the Left Shark.

Who can forget this iconic Super Bowl performance? I'm so happy someone made a Halloween costume out of it.

She really looks like a cartoon. I love the outlines of the bag and clothes, too.

This is perfection. And it's also a bit scary since she really looks like her!

But good luck holding any drinks. I wonder if she thought that one through...

An amazing tribute to a favorite video game. He looks identical to his cartoon counterpart.

This is The Wizard of Oz costume we never knew we needed.

Classic costume well executed. At first glance I thought that was her real hair!

Who can top this Beyoncé look?

She looks just like Frida Kahlo. And the colors in her costume are beautiful!

Demi Lovato as Selena is amazing.

She looks shockingly similar to her...and they're both such talented musicians!

Do you know which classic movie character Emma Roberts is here?

Kristen Bell's daughter made her dress as Elsa for Halloween.

The joke here is that Bell played the other princess, Anna, in the movie Frozen.

Can you even tell who is dressed as Hillary Clinton under all that make up?

I could never pull off a cute hood like that.

You wouldn't think Al Roker could pull off Willie Nelson.

But somehow he does it well. He looks great!

She really sells the look with bright blue contacts. And the entire outfit, actually.

Nick Jonas went as the Hamburglar.

This is a simple costume, but it is instantly recognizable. Just slap some hamburgers on a striped shirt and you're good to go!

But after he got hit by a duck on a roller coaster. That's funny.

Heather Graham dressed as a Day of the Dead skeleton.

Spooky and beautiful, all at the same time.

And she looked great.

She's almost unrecognizable. I love it!

A throwback Halloween costume from 1996!

Lauren Conrad is the DIY Queen of Halloween.

Lauren and her friends dressed as woodland creatures, and they look so elegant.

Mariah Carey as a witch.

Her giant hair really ties together the look.

Jemima Khan had this amazing costume.

She's a woman trapped in a cage by King Kong!