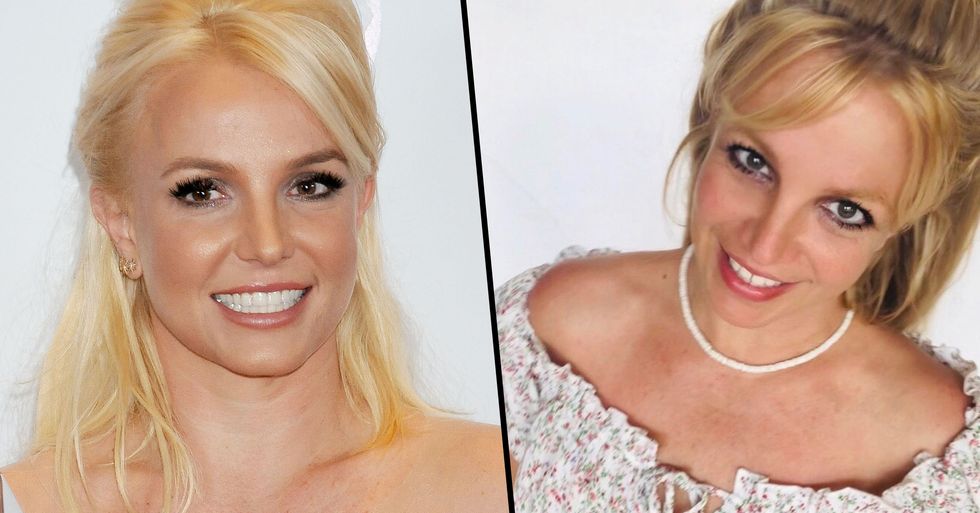 For the last couple of months, Britney Spears has been uploading a series of strange videos to Instagram - fuelling the "Free Britney" movement like never before. So much so, that a petition has now been launched.

You won't believe all the sinister details fans are unearthing...

Britney Spears has battled through years of mental health problems...

And, this week, matters have reached new heights, with fans launching a "Free Britney" petition.

Britney was catapulted into fame from a young age.

Since starring in The All-New Mickey Mouse Club, aged eleven, she embarked on a highly successful career as a singer and performer with the release of the hit single "...Baby One More Time" in 1998.

The singer sat down for an interview on 20/20 in which he revealed that he had, in fact, been intimate with Spears - even though the singer had repeatedly told the press that she planned on remaining a virgin until marriage.

The image of Britney, then aged thirty-seven, emerging from the salon with a freshly-shaven head and attacking a paparazzo's car with an umbrella became one of the most famous snaps of that decade.

Since her 2007 breakdown, Britney's dad, Jamie, has had full control over pretty much every aspect of her life.

A Los Angeles court named Jamie as the permanent conservator of his daughter’s affairs in 2008...

And he was named as the permanent co-conservator of her estate, along with an attorney, Andrew Wallet.

And many are finding the whole set up to be incredibly problematic, not to mention detrimental to Britney's mental health and overall wellbeing.

In fact, this post went viral are for some seriously sinister things about the conservatorship.

"I know some people’s instincts might be to not take this seriously or laugh because the world has made a joke of her existence to a certain extent, but this is a woman who is denied access to her own children, finances, and any control over her own life. The law is corrupt and so are the middle-aged men who are ruining a thriving, successful woman’s life," wrote the fan on Instagram.

And, last week, concerns about the star's wellbeing have arisen once more...

The star has been consistently posting a series of bizarre videos, most of which she is pulling off some pretty strange dance moves. But, in one of her most recent, people are convinced that she is issuing a cryptic cry for help.

This video sparked concern among her fans.

Britney shared a strange video of her showing off her new flowers along to The Weeknd's hit song, "Blinding Lights," and people are convinced that there is a hidden message.

In the strange video, Britney can be seen smiling robotically at the camera while showing off a bouquet of flowers...

The music starts playing before the pop star can be seen slowly walking in and out of the frame, all while maintaining eye contact with the camera.

Yet, despite how bizarre the video is, people are more concerned by her caption.

"HOLY HOLY CRAP !!!!!! My florist surprised me today by making the flower arrangement all different colors  ….. I was so excited I threw on my favorite yellow shirt and just had to SHARE !!!!" she captioned the video. The description of her "favorite yellow shirt" seems a bit random and unnecessary, doesn't it?

Well, her caption could actually be a cry for help.

One Twitter user has come forward with "evidence" that could confirm that Britney used the video to subtly ask for her help.

A screenshot from one of Britney's uploads prior to the flower video shows a user commenting on June 27th: "If you need help wear yellow in your next video." In the video, which was posted a few days later on July 2nd, Britney is wearing her "favorite yellow shirt", which she emphasizes in the caption.

People are convinced that Britney was communicating that she isn't okay...

@myley__ Now that video makes so much more sense as well. It's literally her just showing of her shirt as much as s… https://t.co/aTahfPfn9d
— yannynotfunny (@yannynotfunny)1594155720.0

And that, by slowly walking in and out of the frame and showing off her "favorite yellow shirt," she was actually crying out for help.

Her fans desperately want to help the star...

But, while she remains under the tight control of her father, they are unsure of what to do, especially since the star has an upcoming court hearing for the conservatorship on July 22nd.

Some fans are taking matters into their own hands.

Supporters of the Free Britney movement have set up a petition that has so far been signed over 102,000 times.

The White House has to respond.

Signatures are growing by the minute...

"Since 2008 Britney Spears has been in a conservatorship that gives her conservator full control over her personal life & finances/estate. Conservatorships are typically used for those that are SEVERELY mentally ill," the petition reads. "Since ‘08, she has been on 3 world tours with dangerous flying & fire stunts. It’s safe to say she is sane enough to feed and clothe herself. With this conservatorship, she is unable to properly fight for her freedom as she isn’t legally allowed to hire her own lawyer. We need this petition so that Britney can hire her own lawyer and live a normal life as a 38-year-old woman with 2 kids."

The discussion about mental health has never before been so rife...

And now, people are furious at the stark comparison of Britney's treatment regarding her mental health to Kanye West's treatment. Keep scrolling for the full story...