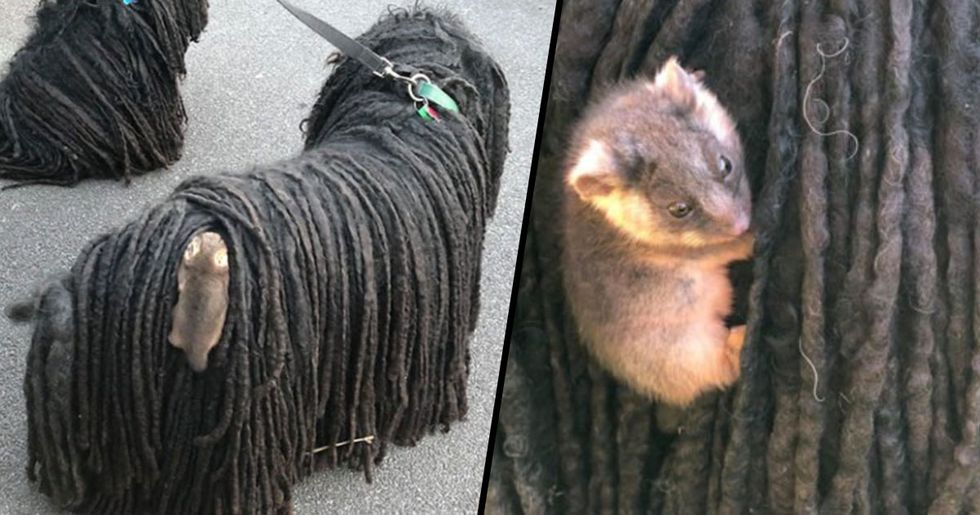 If you were searching in your dog's coat and discovered a tiny little hitchhiker, it's likely your immediate reaction might be to scream. But one woman from Australia had quite another reaction. Sally Watkinson shared images on Facebook of a tiny little possum clinging to the fur of her puli dog. And to make things even odder? It happened again - the very next day.

Luckily, there was a happy ending to the story, as both possums were removed safely and taken into vet care. We bet they're thanking their lucky stars they chose to cling on to dogs with such an accommodating owner.

These little bundles of joy are pretty much the number one way to bring joy to our lives.

But there are some downsides.

If you knew something was living on your dog's back, you'd be liable to freak out.

But one woman from Australia had quite a different reaction when she noticed a particularly cute little guy living amongst her puli dogs tresses.

Because what she discovered was surprisingly cute.

And when she shared it on a local doggy Facebook page, it seems many other members agreed.

Here's the start of the story she shared.

Clinging on to one of her two puli's fur was a tiny baby possum. Weird, for sure - but cute, too.

In spite of their hanging on, it doesn't seem as though the possum was disturbing her dog too much, either.

Along with partner Jon, she spent the afternoon attempting to figure out the kindest way to deal with the uninvited guest.

Eventually, they took their pet to the vets.

The possum was then removed and taken into care by a local wildlife rescue - and was supposedly unharmed after its escapades.

But then things got even weirder.

Because after the day spent figuring out what to do with a hitchhiking possum, Watkinson woke up the next day to a pretty big surprise.

Because this wasn't the end of the story.

Unbelievably, the very next day, the same thing happened again. Watkinson woke up to find that there was another clinging possum, this time to her other puli dog.

And although this time Watkinson knew what to do, this time the possum didn't have such a firm grip and appeared to be annoying her pup.

Many people had positive reactions to this cute story.

People were very glad this had happened to dogs with such a caring owner who ensured the safety of these possums.

People also made this point.

Although these possums can be annoying, they're harmless to dogs and shouldn't be treated cruelly for their hitchhiking ways.

Another shared this incredibly cute story.

Not only was the possum not annoying to this dog, but the pair actually formed a bond.

And some even offered this advice.

Not only do possums not cause harm to dogs, but they can actually work to help get rid of other parasites. The circle of life is truly magical. Interested in more cute dog content? Keep scrolling for the tale of an adorable stray.
20%

$26.95 $21.56
Buy Now
See More Deals
We hope you find these deals as awesome as we do! Just an FYI: we may receive a share of sales from links on this page