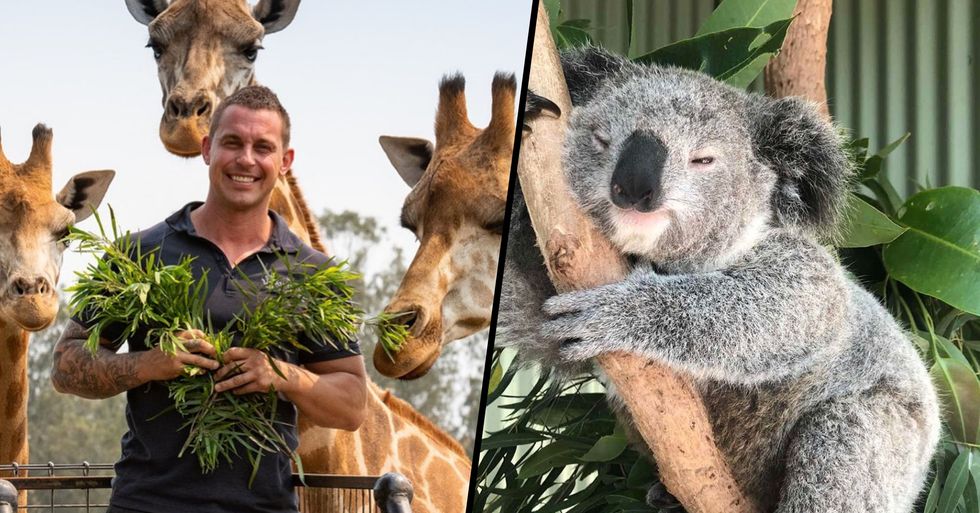 But, this week, one man has been hailed a hero after risking his life to save animals at his zoo. Keep scrolling to see the terrifying picture as the zoo came close to perishing...

And one of these heroes is Chad Staples.

The 40-year-old is the director an Australian zoo who risked his life to save his animals.

Mogo zoo is home to more than 200 animals which Chad calls his "family."

And when the fires tore through the New South Wales south coast, coming dangerously close to his zoo, Chad never once considered abandoning his animals to save his own life.

As the fire came terrifyingly close to his zoo, Chad explained the sky turned red and the conditions were "apocalyptic."

"Flaming trees collapsed close to animal enclosures as the fire jumped over a stream on two sides of the grounds. The sky turned red and Mogo fell into complete darkness by noon," he said.

The fire came close to engulfing the entire zoo.

The pictures are truly harrowing.

Instead of fleeing, he and his team of fifteen zookeepers stayed to protect their land and animals.

"There's no way we would leave the animals behind. These are family - not things."

At one point, a fire service even stopped by to tell them that no one would rescue them should things took a turn.

"They were busting a gut to save everyone else,"  Chad explained. "I've never felt heat like that or seen fires that look like that and I never want to see that again."

Many of the animals took shelter at Chad's own home.

According to Daily Mail, the zoo's 6 zebras, 2 rhinos, 6 giraffes, 4 gorillas, 3 tigers, and 6 lions were all given shelter, with some residing in Chad's own home on the property and others in their night dens.

"Right now in my house there are animals of all descriptions in all the different rooms so they're safe and protected,' he said after the blaze swept through."

Unbelievably, Chad and his team managed to save every animal.

Not a single life at the zoo was lost to the relentless fires. Want the latest on the bushfires? Keep scrolling to see the harrowing images that truly sum up the devastation. Just wait until you see number one. So heartbreaking...