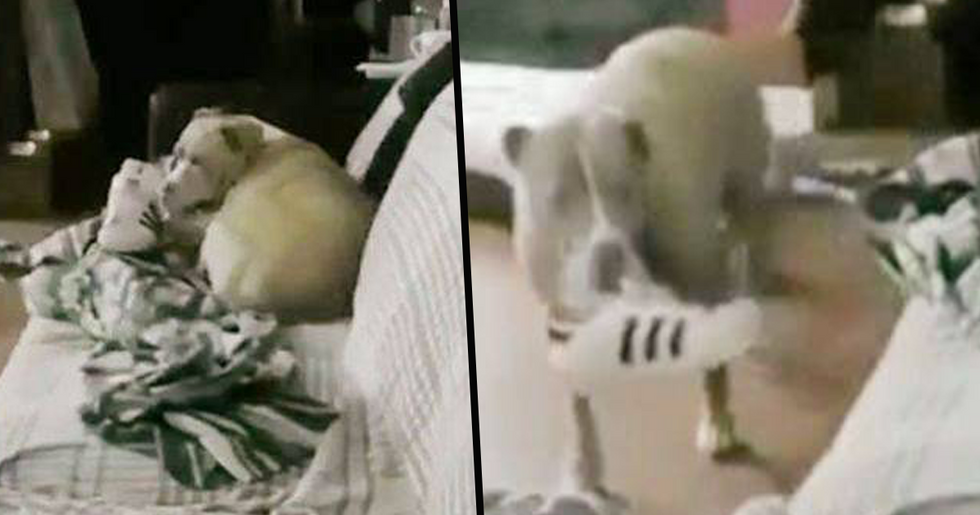 A pet owner decided to set up a surveillance camera in their home to see what their dog did in their absence... But what they saw was utterly heartbreaking.

Out of all the pets out there, it is our dogs who reign supreme.

It's no secret that dogs are the nation's favorite pet - They're cute, they're loving, and, most importantly, they're loyal.

There is nothing else quite like the loyalty of a dog...

And we all know that our pooches would, quite literally, walk to the ends of the earth for us.

But, with this loyalty, comes one major issue.

As pack-oriented animals, dogs are happier and more content as part of the household "pack" and can become distressed and, sometimes even depressed, when left alone for long periods of time.

Now, we would all love to spend every dying moment with our dogs, I'm sure.

But, with jobs and other commitments, this is sadly just not possible for the majority of us.

So, as a result, our dogs have to be left at home alone.

Granted, a couple of hours of alone time won't do our pooches much harm. But, sadly, there are many dogs out there who are left completely alone in the house all day long.

Dogs are social animals, and they form strong attachments with their humans...

Studies have even found that dogs don’t just tolerate human presence; they actively seek it out. So, it’s safe to say that these animals need social closeness with humans, and deprivation of this contact poses welfare concerns.

Dr. Sean O'Hara, lecturer in wildlife cognition and behavior at the University of Salford, seconded these findings.

He explained: "Dogs have evolved to living in fully cohesive groups, i.e. ones that don't temporarily fragment. Social isolation is therefore often problematic to them and they can experience anxiety due to separation. "It's also true that with dogs being social animals they are likely to feel less secure in those times they are left in social isolation. Social animals have shown to crave social contact when isolated more than food."

They should not be left alone for more than a few hours because these dogs suffer from separation anxiety if they are alone for too long.
— French Bulls (@French Bulls)1595241747.0

And many can grow to become anxious and aggravated as a result. Who else is suddenly rushing home from work?

Anyway, many of us will never actually see these side effects...

Because, as soon as we return home, our dogs are happy and full of beans once again.

But many of us can't help but wonder...

What exactly do our dogs get up to when left all alone in the house?

Well, one dog owner decided to find out.

A Reddit user, who has remained unidentified, decided to set up surveillance cameras around the house in order to get an insight into their dog's doings and emotions while left alone in the house.

And the result was nothing short of heartbreaking.

The dog, which resembles a pit-bull mix, could be seen wandering around the lounge forlornly before sniffing out and picking up its owner's shoe.

Here, you can see the pooch clutching a solitary sneaker in his mouth...

As he wanders tentatively towards the couch.

He then slowly climbs up...

And starts circling for a spot to settle down (and start chewing up the shoe, maybe?)

The dog finally settles in a spot...

But none of us were expected his next move.

He cuddles up to the shoe.

Yep, instead of chewing or ripping up the shoe to smithereens like our own pooches would have done, the dog simply rests his head against the shoe.

It really is the most heartwrenching watch.

Evidently, this dog misses his owner so much that his only comfort is a shoe that smells like him or her.

Since being posted onto Reddit, the video has been viewed thousands of times...

And many people have commented that they just couldn't bear the thought of leaving their own pet so lonely. One person wrote: "That's it. I'm never leaving my dog alone again," while another commented: "That broke my heart a bit! Needs a friend, I think. So lonely."

You can watch the video for yourself here.

Though be warned, it may haunt you for the rest of your days.

The love and loyalty of our dogs really does know no limits...

And, in many instances, they have been known to change people's lives for the better. Keep scrolling to read about the woman who, once terrified of dogs, adopted dogs terrified of people to build a beautiful friendship...