Oxford Dictionaries Just Announced Its Word of the Year, and People Are Confused | 22 Words 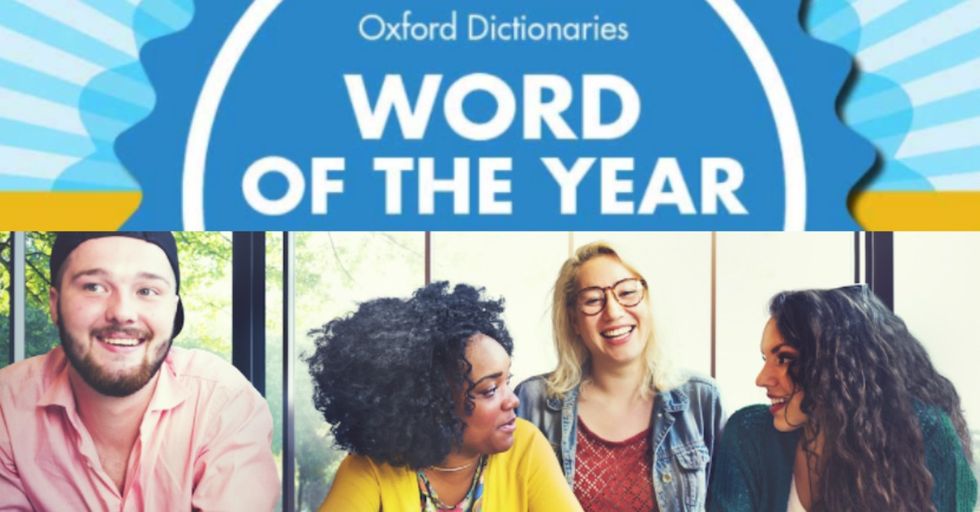 Oxford Dictionaries Just Announced Its Word of the Year, and People Are Confused

2017 has been a whirlwind, and not in a good way. The year's been marked by constant strife in the White House, hundreds if not thousands of sexual assault allegations of dozens of powerful men, and more than a few natural and man-made disasters. As a response, the world's most famous dictionaries have chosen Words of the Year that resonate with the American people at this specific moment. And Oxford Dictionaries' just-announced word is no different.

Nerd alert! Nerd alert! The Oxford Dictionaries Word of the Year for 2017 is here.

2017 has been a doozy, and the Words of the Year that have been announced for each dictionary have reflected the trying times in which we live. Also, just kidding about that "nerd alert" stuff. Everyone knows dictionaries are the coolest.

A few weeks ago, Dictionary.com announced that their Word of the Year is "complicit."

It was clearly in response to the accusations that Ivanka Trump hasn't used her immense power to influence her father in the way she should. Searches for the word spiked in 2017, and the word clearly touched on feelings that were overwhelmingly strong.

Needless to say, the Internet loved the choice.

Dictionary.com became the hero of the resistance, if even for just a moment. It became very obvious that the words people use are dependent on what's happening in society — in short, Donald Trump, in addition to everything else, has had an effect on the language we use.

In a similar move, Merriam-Webster (another cool dictionary) named "feminism" its Word of the Year.

Between the women's marches and the brave women coming forward against their abusers, 2017 has firmly cemented its place in history as a year marked by feminists' fight. Searches for the term increased by 70 . percent, according to CNN.

And now, in the same spirit of Dictionary.com and Merriam-Webster, Oxford Dictionaries announced its timely, relevant, and powerful Word of the Year:

Youthquake?! Well, that's an interesting choice. Youthquake is defined as "a significant cultural, political, or social change arising from the actions or influence of young people." Why was it chosen? Apparently, there was a "fivefold increase in usage" of the word in 2017, especially in the U.K. in discussions centering around younger voters heading to the polls. The Internet obviously had a lot of thoughts about Oxford Dictionaries' choice...

Most were incredibly confused.

Have you ever heard anyone use the word "youthquake"? Because we have not. In fact, we didn't even know it was a word, let alone the word worthy of the Word of the Year honor.

This Twitter user doesn't think anyone's ever said the word before.

And we think they might be correct. "Complicit," "feminism," those are words we understand, words we were well aware had been swirling in the lexicon for the past year. "Youthquake" on the other hand...

Well, we just don't know anyone who's ever said it.

Youthquake sounds like a word you would use when you're trying and failing to convince young people that you're hip and cool.

"After we grab a youthquake, why don't we shimmy down to the discotheque? We can do The Twist and share a chocolate malted because I have traveled in time from the 1950s but I'm trying to fit in and keep it a secret shhhhhhh."

OK, this is the best and worth having "youthquake" as the word of the year.

"Youthquack" is the new "youthquake." That duckling on a tiny skateboard is maybe the most perfect image that's ever been crafted. Our eyeballs are happy, for once in 2017. Maybe "youthquake" was a pretty good choice after all.