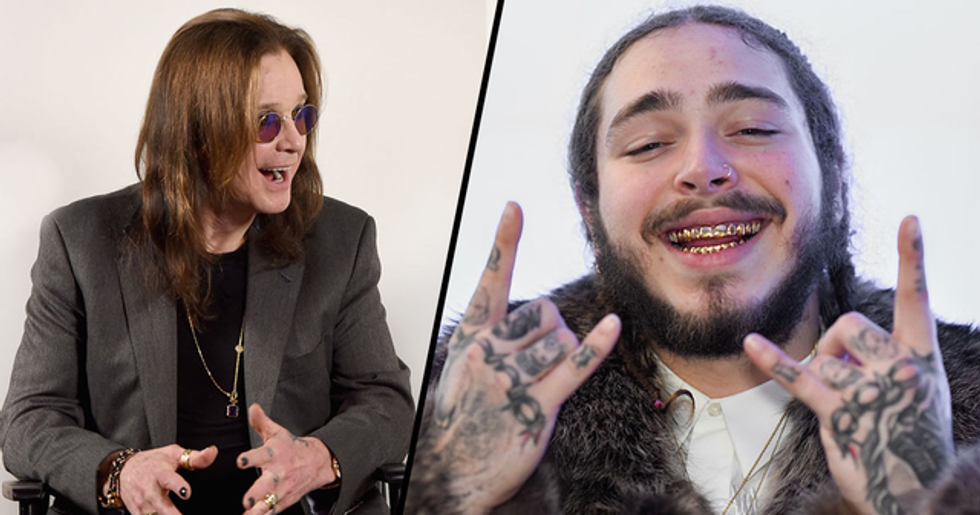 Post Malone fans proved their ignorance and naivety recently when they inadvertently revealed that they had absolutely no idea who the Prince of Darkness, Ozzy Osbourne, was after he featured in Post's most recent album. Completely barbaric, I know.

But, in a hilarious twist of events, the Prince of Darkness has now revealed that he had no idea who Post Malone was before the collaboration. Irony at its finest.

Keep scrolling to read the full story, and to hear in full what Ozzy had to say about the young rapper...

But the most incredible collab goes to...

The Prince of Darkness himself, Ozzy Osbourne.

The hilarious reality show followed Ozzy, whose real name is John, and his wife, Sharon, with their two kids, Jack and Kelly. This British family living in LA were completely chaotic and out of control, but that's what made the world love them.

Hailing from Birmingham in the U.K, Black Sabbath were the first of their kind all the way back in 1968. Ozzy teamed up with bandmates, Geezer Butler, Tony Iommi, and Bill Ward, and, together, they started the era of heavy rock and metal music.

They were, and still are, renowned for their wild lifestyles back in their touring days. The band, Ozzy, in particular, were well known for their alcoholism and heavy drug use for years and years - and, somehow, they're all still alive.

Ozzy was excited to collaborate this year with Post Malone...

According to LoudWire, the metal legend said that their song was his “favorite" appearance since he was in Sabbath. But what about Post's fans?

A lot of Post Malone fans seem to be clueless as to who Ozzy is...

And they have actually been praising Post for "shining light on unknown artists." Ozzy Osbourne is a living legend in the world of rock and metal music and the fact that a lot of Post Malone's work fits into the rock genre means that fans should have at least a small idea of who Ozzy is...

Fans are crediting Post for Osbourne's rise to fame as he's "about to blow up hella fast."

Fans of the Prince of Darkness was quick to correct these naive and clueless fans...

Ozzy Osbourne didn’t bite the head off of a bat, snort ants, and piss on the Alamo for you to think Post Malone put him on the map
— Justin Schack (@Justin Schack)1567961400.0

"Ozzy didn't bite the head off of a bat, snort ants and p*** on the Alamo for you to think Post Malone put him on the map" one user passionately wrote.

People are losing hope for this generation...

Imagine not knowing who John Lennon is? It should be exactly the same with Ozzy Osbourne, a man in a band that has impacted the music world just as much as The Beatles.

Ozzy fans are keeping it real...

And they are branding Post Malone fans as "young and dumb."

The Daily Dot reported that Post said about Ozzy: “I think he crushed it." “Ozzy was talking to [Andrew] Watt, and Watt was telling me, yo, 'This is my favorite thing I’ve done since, you know, Sabbath. Since I started my own way.'" So far, the album has received fantastic reviews and it sounds like the Prince of Darkness has, as always, done a spectacular job in making some brilliant music.

But, now, there has been a spectacular turn of events.

Because it turns out that, despite Post Malone fans not knowing who Ozzy is, Ozzy didn't know who Post Malone was. If that makes sense.

Ozzy didn't have the faintest clue who the rapper was.

In an interview with The Sun, The seventy-year-old rocker spoke about working on new music and said that, despite having never heard of Malone, collaborating with him led to him beginning work on a new album with Malone’s producer.

But, in classic Ozzy style, he agreed to the collaboration anyway.

“I’d never even heard of this kid." Ozzy nonchalantly explained. "He wanted me to sing on his song ‘Take What You Want,’ so I did, and then one thing led to another."

And, amazingly, Ozzy went on to set the foundations for a new album.

All through collaborating with "some kid" he'd never heard of. "I started recording a new album with Post Malone’s producer Andrew Watt. It’s only 9 tracks but it was a catalyst to get me to where I am today."

Ozzy credits Post for "getting him off his ass."

Ozzy was in hospital shortly before the collaboration after an accident in his home. “If it wasn’t for making this record I would still be on traction, thinking, ‘I’m going to be lying here forever’. I’ve missed music so badly. My fans are so loyal and so good. Up until making the album, I thought I was dying. But that got me off my arse." Thanks for bringing the Prince of Darkness back to us, Post. Speaking of old classics vs modern bangers, keep scrolling to hear about the "unknown" band, Tool, de-throning Miss Taylor Swift and to learn why people are so pissed about it.