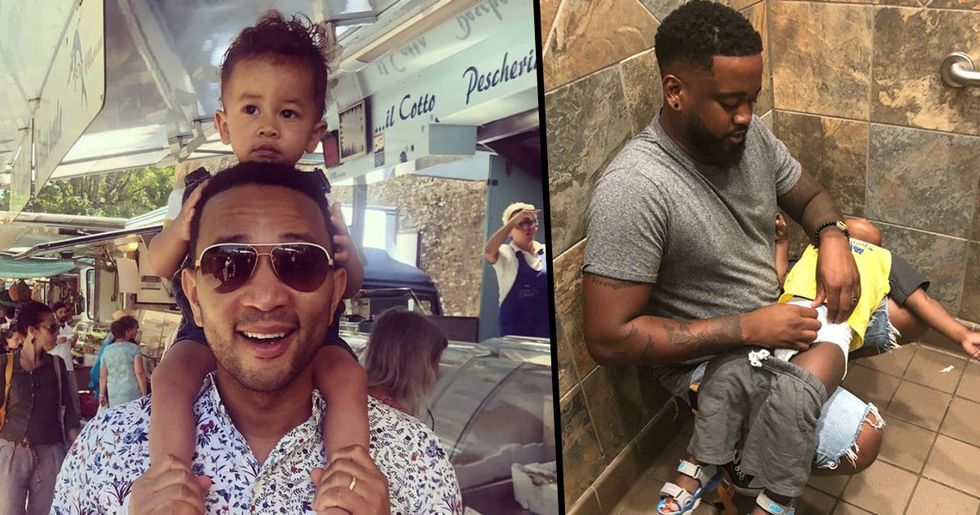 It might be 2019, but it seems that society hasn't quite got to grips with the fact that dads have to change their baby's diapers too. In fact, the lack of baby-changing facilities in public restrooms has been forcing dads to change their children on the sinks, countertops and even the floor.

But, after a photo of one dad trying to change his child's diaper on the floor went viral, it seems like fathers across the globe have finally had enough, sparking calls for more baby-changing stations in men's public restrooms.

The internet may have gone crazy for the campaign, but it now seems that its impact has reached the celebrity sphere as one singer, in particular, has been speaking up about the issue and his say has well and truly had an effect.

The stay-at-home dad from Florida, who runs the Instagram account, 'Three Boys One Goal', said that the lack of baby changing stations in public restrooms would regularly force him to change his 1-year-old son on the floor. After seeing his frustration, last September, his twelve-year-old son snapped a photo of him squatting on the floor, struggling to change his son's diaper - a pose later donned as the “man squat". The picture quickly went viral, with fellow dads expressing their frustration at the lack of baby-changing facilities.

Following his viral post, Palmer set up the #squatforchange campaign.

After seeing the response to his post, the thirty-two-year-old created the #squatforchange hashtag to encourage other hands-on dads to speak up about the lack of baby-changing facilities in male restrooms. Palmer's Squat for Change organization is pushing for social and legislative change - aiming to ensure that, for dads, changing babies' diapers on the floor is a thing of the past.

When you take your boys out for some chicken nuggets in 2018 and @McDonalds still doesn’t think it’s necessary for… https://t.co/bE5iETCQtH
— chase montney (@chase montney)1545432406.0

Soon after #squatforchange launched, dads across the globe began posting similar photos - taking to social media to call out how the lack of baby-changing stations in male restrooms is sexist. One Twitter-user wrote: "When you take your boys out for some chicken nuggets in 2018 and McDonalds still doesn’t think it’s necessary for there to be a changing table in the men’s restroom. Photo credit to my 4 year old", while another said: "When I was on shared parental leave, I encountered this problem many times. We need better baby changing facilities for fathers. Thanks for raising the issue."

Fathers have been reacting to the campaign...

One dad expressed his frustration, saying how "modern dads" take their children out without their mothers and need access to more of these facilities.

Even moms have been speaking out about the issue...

One Twitter-user took to the site to complain about how some women's restrooms don't even have baby-changing stations.

One mom uploaded an image of her changing her son on the sink.

The parent urged people to not forget about moms needing more baby-changing facilities, too, as she shared an image of her struggling to change her son's diaper. Palmer re-shared the image on his own Twitter page.

Last year, Palmer set up a GoFundMe page for the Squat for Change organization.

On the page, which was created in November 2018, Palmer writes that his organization is "leading the charge to ensure all members of the family have access to safe, clean changing tables in public restrooms around the world".

The father is now calling on people to donate to the cause.

Since launching the Gofundme page, Palmer has managed to raise $1,459 of his $50,000 target. The money raised is being used to fund the direct expenses and management of the campaign, with any leftover funds being donated to the National Diaper Bank Network. "Between travel costs to conferences and speaking engagements, marketing efforts (including branding, business cards, website creation and maintenance, and other marketing collateral) and day-to-day business expenses, the Squat for Change team need your support to make this campaign successful", writes the dad.

As well as donating through the page, those wanting to support the cause can now buy #squatforchange merch...

Ranging from t-shirts and sweatshirts to mugs and stickers, all sporting the #squatforchange logo, supporters of the cause can buy merchandise through the organization's website.

Despite some progress being made, Palmer says that it's still not enough.

In 2016, then President Barack Obama, signed a bill ensuring that baby-changing facilities were installed in men's and women's restrooms. However, this bill only applies to federal buildings, meaning that other male public restrooms are still lacking these facilities three years on.

This isn't the first time that the issue was raised, in fact, actor, Ashton Kutcher, spoke out about the issue in 2015...

Kutcher posted the comment to Facebook shortly after the birth of his first child, Wyatt, with partner, Mila Kunis.

However, dads in New York state won't have to worry about where to change their baby for much longer...

According to new building codes, all new or renovated buildings in the state will be required to install baby-changing facilities accessible for both men and women.

Earlier this month, Howard County, Maryland, passed a bill that sets out to expand baby-changing facilities for parents.

With changing tables in all public restrooms, both moms and dads can be caregivers. We support #SquatForChange beca… https://t.co/47htV70zhT
— Dove Men+Care (@Dove Men+Care)1547482181.0

The skincare-giant spoke out in response to the recent legislation in New York, meaning more men will have access to baby-changing stations.

And it seems like one very famous face has now got on board.

Singer, John Legend, is now taking a stand against the lack of changing facilities in men's restrooms.

The star is the perfect spokesman for the issue.

The singer is a father to his two children, Luna and Miles, who he shares with his wife, Chrissy Teigen. In an interview with People magazine, Legend spoke of how he and Teigen felt that a huge part of co-parenting came from sharing diaper duty. Legend said: “It all started from an organic situation which was that Chrissy and I both shared diaper-changing duties with Luna." And why shouldn't he be able to change his kids' diapers?

It's all part of a campaign with Pampers.

The star is teaming up with diaper brand, "Pampers," for their “Love the Change" campaign. But wait, it gets even better...

The campaign is hoping to bring huge

change across the US and Canada, and here's how... The campaign is aiming to provide 5,000 Koala Kare changing tables for public restrooms in high-need areas across the US and Canada by 2021. “We really started getting behind the idea of dads having diaper duty and that being a part of co-parenting," the singer said. "Then Pampers and Koala Kare came together to say, ‘You know what? We’re encouraging dads to change diapers and be active parts of the parenting duties, but a lot of times, the facilities aren’t built for that to happen.’"

Despite awareness around the issue being made, Legend says that he's "surprised" that dads are still left out of diaper duty.

“I’m glad that we’re highlighting this issue," the star said. “Overall, it’s part of a movement that we recognize the duties of parenting and running the house should be shared more equally between partners."

We're delighted with the news that Pampers will be working to make a difference.

As John Legend said, “I think making the changing stations available is gonna make a difference for a lot of people."

Pampers will be partnering with changing table company "Koala Kare."

The high-need locations for these changing tables will be identified quickly and they will be provided as soon as possible.

It's not just exclusive to restaurants, however...

Pampers are hoping to target community centers, recreational centers, parks, and libraries in cities such as Cincinnati, Dallas, and Philadelphia as well as many others across the US and Canada.

Andre Schulten, the Vice President of Baby Care North America, had his say...

"We know that dads want to be able to bond with their children by taking them out and about, and that means the inevitable diaper-duty no matter where they are," he said. "In many instances today, instead of it being an easy, straightforward task it’s a moment that causes angst because the facilities needed are not always available."

The initiative is called #LoveTheChange, which is in response to Pamper's #SquatToChange campaign. Things are certainly looking up for dads across the globe and it is already looking like a historic movement in parenting.