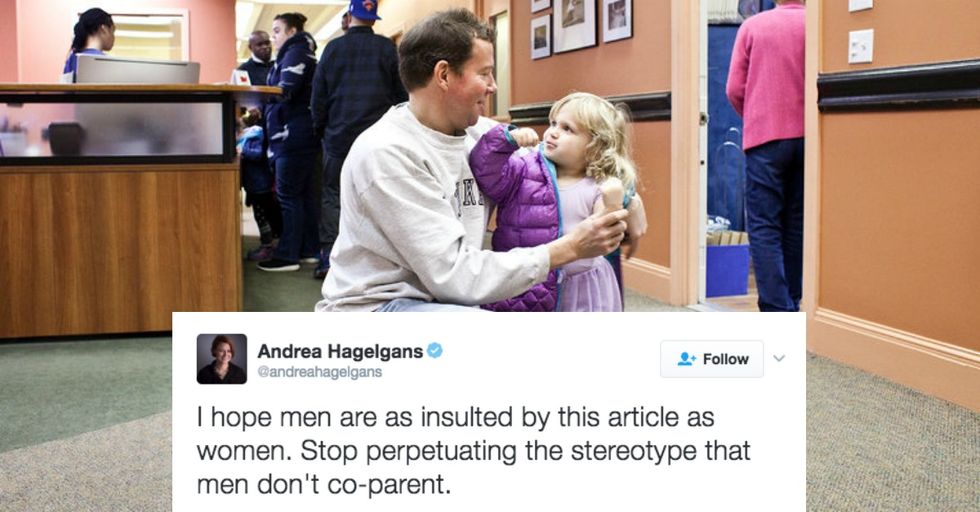 On Sunday, the New York Times published a piece on how the men of Montclair, New Jersey, were forced to parent solo as their wives or female partners left for the women’s marches in Washington D.C. and New York.

The article, titled “How Vital Are Women? This Town Found Out As They Left To March," described men’s routines as “radically" altered. A dad was even quoted as saying, “I did have to laugh at the irony of my wife marching for equality in New York while I was missing the game and cleaning out the refrigerator." Yeah, he said that, and the article went on to bemoan the fact that the marches happened on the weekend when men were forced to "juggle schedules on their own."

As you can imagine, the eyes of women everywhere rolled all the way back in their heads.

Editors at The NY Times have since apologized for the story, saying “We blew it." “It was a bad idea from the get-go," said Wendell Jamieson, the editor who oversees the Times’ Metro section, where the story appeared on Sunday. “It was conceived with the best intentions, but it fell flat. And I regret it." But the story was out there and people took to Twitter to roast them for the ridiculousness of the whole thing.

Some dads acted clueless in a parody of the way the article portrayed fathers.

Others reminded everyone that dads are not, in fact, babysitters and many manage to take care of their own children regularly without any problems — go figure!

Then the moms weighed in.

Ridiculous story short, fathers are parents, not babysitters. Men taking care of their children should not be news. But at least when it is, it gets the treatment it deserves.