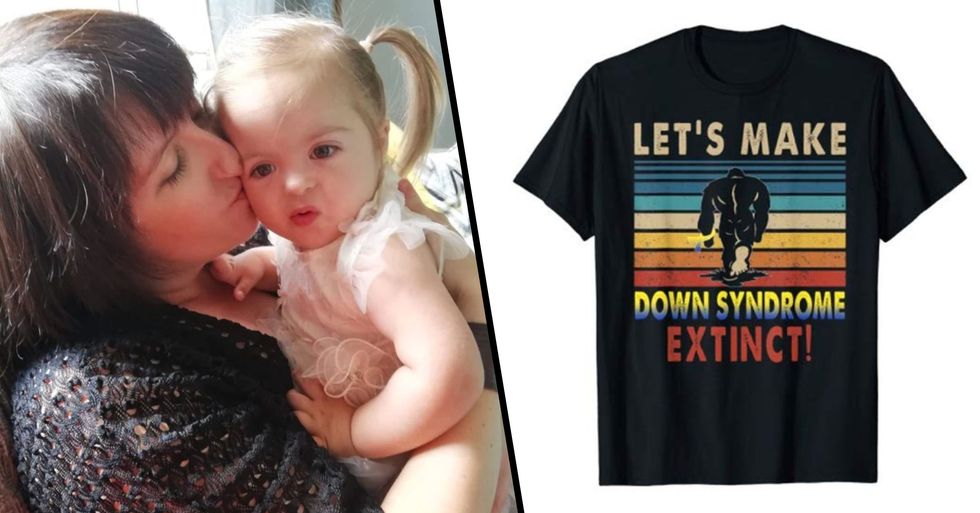 There are hundreds of thousands of people around the world who have Down's Syndrome, and this is certainly nothing to be ashamed of.

The genetic disorder is now more embraced and accepted than ever, but of course, there are still some cruel people out there who enjoy making fun out of those with the disorder.

Keep scrolling to learn about the disgusting "Let's Make Down's Syndrome Extinct" t-shirt that has caused a lot of outrage...

Down's Syndrome is a genetic disorder that affects many people around the world...

But what exactly causes Down's Syndrome?

Down's Syndrome occurs when an extra copy of a chromosome is present at the time of conception... Specifically, a full or partial copy of chromosome 21.

But many people with Down's syndrome can go on to live full, independent lives...

Sadly, there is a stigma around the disorder...

And there are way too many cruel people out there who make fun of those with Down's Syndrome.

A fine example of this cruelty has been showcased online recently...

And it is all over a t-shirt originally listed on Amazon.

The t-shirt had the slogan, "Let's Make Down's Syndrome Extinct."

A woman tweeted a picture of it online, saying, "@AmazonUK, why are you selling this product? Take it down please it's deeply offensive."

Of course, it caused a lot of anger...

And after a petition was created to have the t-shirt removed from the website, Amazon eventually took action and removed the hateful product.

This disgusting t-shirt has been called out by lots of angry parents...

Including Rachel Mewes, the mom of 2-year-old Betsy who has Down's syndrome.

Rachel, her partner, and little Betsy live in Northumberland in the U.K...

She said, "Amazon UK selling and promoting this product is dehumanizing for anyone with Down’s Syndrome. It’s discrimination and it’s verging on promoting hate crime."

She feels that the t-shirt shares an extremely frightening message...

"It’s very, very ignorant and shows a lack of tolerance, inclusion, and acceptance. I dread to think how many people have actually looked at it and bought it. It shouldn’t even exist," Rachel explained. "If you’ve got Down’s Syndrome and see a product like that saying they want to make your condition extinct – that’s very frightening."

Rachel isn't alone in thinking this...

Caroline Wylde is also the mom to a 2-year-old with Down's Syndrome, and she said, "There are some really horrible people out there – but to see Amazon do that, especially with Down’s Syndrome Day coming up, it’s like it was put there on purpose."

Caroline was outraged by the product, just like many other parents...

"Someone sent [the link] to me because they knew I’d go mad. I thought ‘could somebody have just put it out there and it’s not for sale?’ I couldn’t believe it at first. But I typed in the slogan on the t-shirt into Amazon and it came up. It was there straight away in every single size. It’s really hard to see stuff like that," she explained.

This isn't just an outrage for parents of children with Down's Syndrome, but for kind-hearted members of the public in general...

Caroline added, "My little boy has Down’s Syndrome so obviously that’s going to make me more upset, but if I saw it and didn’t have him, I’d still think it was disgusting."

Amazon are yet to comment on the selling of the t-shirt...

In the meantime, make sure to keep scrolling to learn about the teenager with Down's syndrome who went on to become a model after doctors urged her family to institutionalize her...
20%