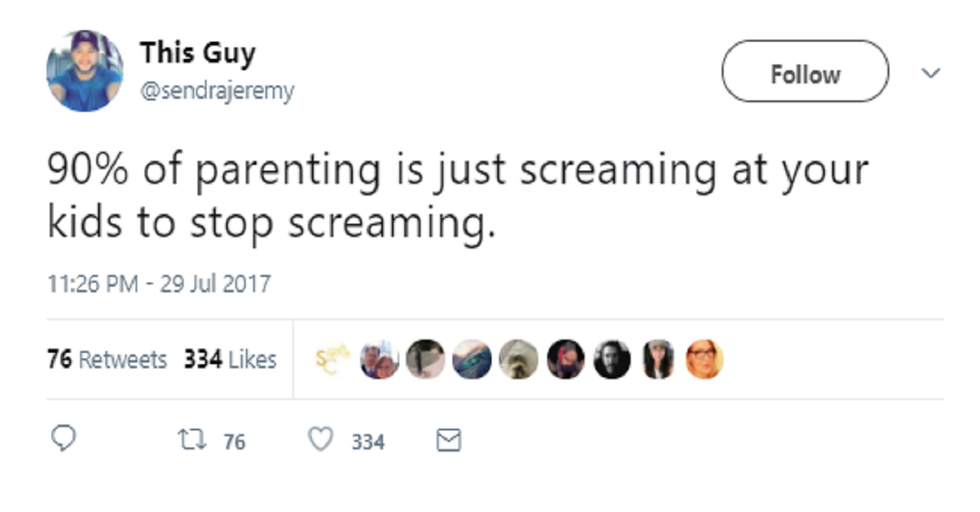 Parents Are Having Fun Explaining Breakdown of Their Child-Raising Duties

Where would we be without our parents?

Raising kids is never easy — they're always a handful. Knowing that, Twitter decided to get analytical with their experiences and gave some hilarious breakdowns of what actually goes into parenting.

Starting with something simple, kids make a lot of smells.

And as a parent, it's your job to figure out what that smell might be. Woohoo? They gave a pretty specific breakdown at 78% too, which is admirable.

Most of the time you know what the smell is though.

And this is where everyone's favorite emoji comes in handy, the "chocolate ice cream" emoji. (Yeah right, Apple.)

Kids outgrow things so quickly that it's impossible to keep everything around.

But you have to throw things away secretly, or else they'll suddenly want them again. Everyone wants what they can't have, even adults.

Apparently throwing your child's things away is actually more common than we thought...

Now I'm starting to wonder about my own parents...

Kids make a lot of trash though, and it's your job to pick it up!

To this day I'm still finding candy and straw wrappers in my pockets, but I don't have any kids. I don't know what that says about me.

Everyone likes candy though, even parents.

If you're really craving that Snickers but your little devil is around, simply head to the bathroom and enjoy a snack break. Probably not the most sanitary move, but desperate times call for desperate measures.

The bathroom is a key component in general when it comes to parenting.

Whether you're eating candy in there, or screaming through the door at a child that locked itself inside, it's a safe house for your sanity.

Or simply making sure they've gone to the bathroom at all.

Those are all high percentages too, so if you have baby fever just know that you'll be spending about 80% of your time near a bathroom.

My favorite is the "fight fire with fire" method.

Also known as yelling at someone to stop yelling. It makes so little sense that it actually makes sense.

However, the biggest part of parenting might just be wiping things up.

That percentage checks out. Hope you have those baby wipes handy.