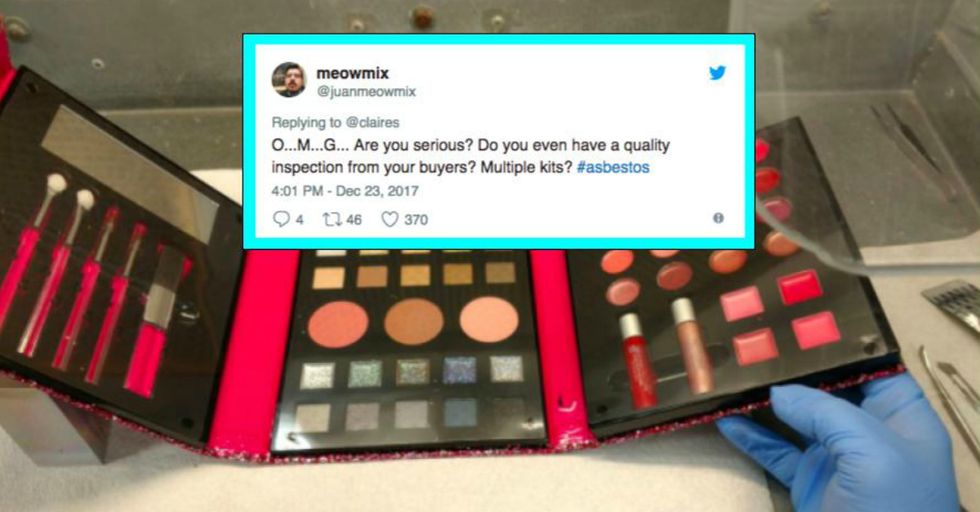 If it's not Kylie Jenner's Lip Kits, it's Rihanna's Fenty Beauty, which has taken makeup stores by storm. Now, more than ever, young women are dying for the perfect face, and they're willing to shell out a lot to achieve it.

You only have to look at the popularity of beauty bloggers such as Michelle Phan, who makes over $3 million a year, and has over 10 million subscribers across different social media platforms, to understand the new power that makeup has achieved in the zeitgeist.
And retailers are cashing in. Kylie Jenner made $420 million off her lip kits before she turned 20. Rihanna made a reported $72 million off Fenty Beauty... in one month.
With all this cash flowing in, you'd think retailers were taking precautions with their cosmetics, right? You'd think they'd make sure their cosmetics were absolutely, positively a hundred percent safe, right?
And even if they weren't safe, you'd think the cosmetics would have only minor problems, like too much oil base, or maybe staph-causing bacteria. Actually, wait, that's sort of really bad...
In any event, one Rhode Island mom found out the hard way that cosmetics aren't necessarily safe, and what she found led to the mass recall of several products by a beloved teen retailer.
Kristi Warner, a Rhode Island resident, works for Deaton Law Firm, a firm that specializes in asbestos litigation. This means she's cautious about the products she allows her family to use. “In the work that we do, we’ve come across contaminated cosmetics, but you just assume that children’s product would be safe," Warner said.
When her 6-year-old daughter McKenzie got a glitter makeup kit from teen retailer Claires, Warner was concerned by the ingredients, so she sent them off to be tested at an independent lab.
The results were shocking. The makeup kit contained tremolite asbestos, which is linked to mesothelioma, a particularly aggressive kind of cancer that "develops in the lining of the lungs,  lungs, abdomen, or heart. [It] has no known cure and has a very poor prognosis."

She wasn't the only person concerned. McKenzie was horrified. “Her response was, ‘Am I going to die?’" Warner said, adding, “There’s no right answer to that because I don’t want to lie to her."
Warner and her boss, John Deaton, bought 17 more Claire's makeup kits from across several states and had them tested. All came back positive. “The fact that the majority of the products came from the store shelves within the last two weeks means that there are other children being exposed," Warner said.

In response to Warner's investigation, Claires has pulled the products from their shelves. The retailer said that they were investigating the issue, and that their customer's safety was “of paramount importance."

In the days since, the retailer has put out a full list of affected products, which includes:
Parents, however, weren't so easily placated.

Refund? Oh no, this is considered evidence now. Hope you called your lawyers cause this will cost more than a mere refund. #clairesclassaction pic.twitter.com/GPIjT62Ktb