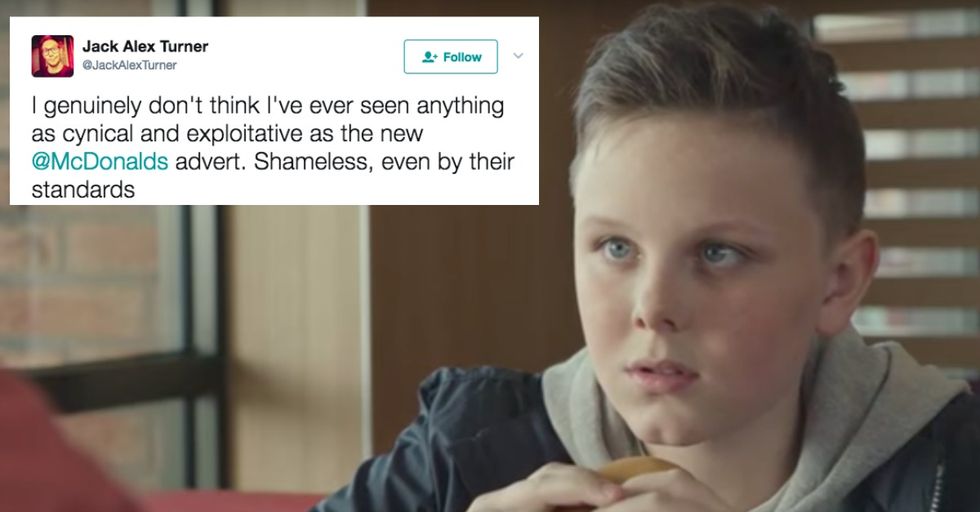 With all the different products out there vying for consumer attention, companies are trying different angles to bring in those dollars. One way to go is to appeal to the sentimental side of people, which is what McDonald's was aiming to do in a commercial that has since been pulled.

McDonald's ads over the years have typically been pretty upbeat.

And they've used those ads to craft a family-friendly image over the years, but they took it in a different direction with this next ad.

The ad features a young boy walking with his mother and asking numerous questions about his father.

We come to find out has passed away before the boy could get to know him. Kind of a dark start for a McDonald's ad.

The boy was obviously yearning to make some type of connection.

And it doesn't appear to happen until, of course, he goes to McDonald's and orders a fish sandwich.

If you think it's a little bit weird that McDonald's used a fish sandwich to appeal to kids with dead parents, you aren't alone.

'Cause it seems pretty damn weird to most of us. Twitter weighed in, and they were not happy.

People are upset, saying that the ad manipulates children who might have lost a parent.

And that's a pretty valid concern. Or at least a very weird premise for a burger ad.

People who had gone through actual real-life experiences similar to the boy's weighed in.

McDonald's intent obviously wasn't to offend, but it was too late. The damage had been done.

"A bit dodgy" is a nice way of putting it.

"Bereavement sucks but a hamburger will sort that right out" is a pretty weird message, even if it isn't the one they meant to send.

McDonalds did realize their mistake, but they were in a bit of a bind.

They already had put the ad into syndication on television.

And even if they did manage to remove it from television, the Internet never forgets.

Not everyone agreed that it was in poor taste, however...

There was the camp that just thought people will complain about anything nowadays.

And others just enjoyed the ad for showing a "lovely moment."

It wasn't a lovely moment though, it was an ad... With actors.

As for McDonald's, after pulling the ad, they released this statement:

“We can confirm today that we have taken the decision to withdraw our ‘Dad’ TV advert. The advert will be removed from all media, including TV and cinema, completely and permanently this week. “It was never our intention to cause any upset. We are particularly sorry that the advert may have disappointed those people who are most important to us – our customers. “Due to the lead-times required by some broadcasters, the last advert will air today, May 17. We will also review our creative process to ensure this situation never occurs again."

Here is the ad in question:

What do you think? In poor taste or much ado about nothing?