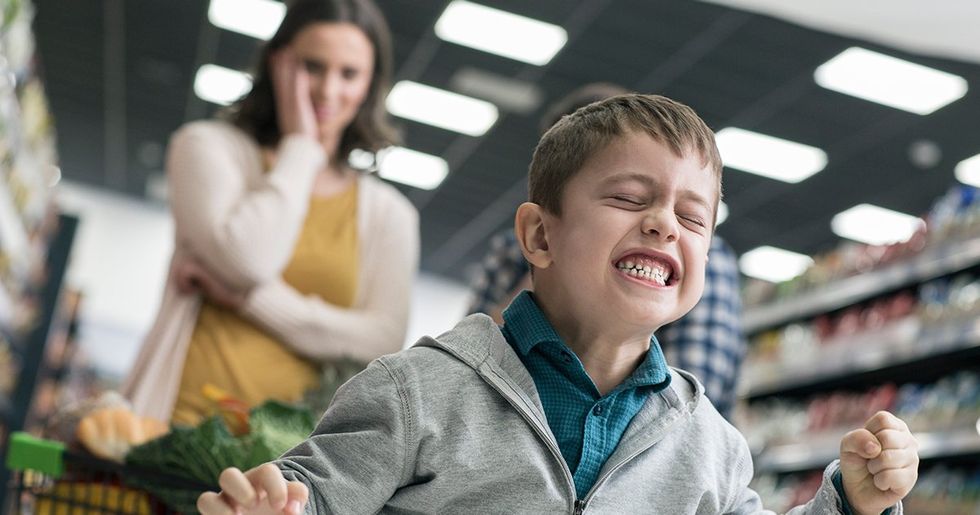 Kids are wonderful. They're tiny and adorable and their clothes are the cutest clothes on the entire planet. If you're lucky enough to watch a child grow up, you know how amazing it can be to be with them when they learn something new or say something especially cute.

Of course, they're not always cute. Sometimes, they're downright embarrassing. People always talk about how kids say the darnedest things, but I think a lot of people who don't spend time with kids don't realize just how wild the things kids say can be. I work at a preschool and just the other day, one of the students provided me a list of his dad's favorite curse words.

A recent AskReddit thread asked people to share the most embarrassing thing their kid has ever said in public. There were so many good responses that had me cackling at my desk. Here are some of my faves.

My oldest Daughter and I used to run away from my wife when we went shopping. One time, we got particularly far away and I asked her what do you wanna do now that Mom can't stop us? She exclaimed loudly, near others, "We can punch a stranger!" –openletter8

It's always nice to have a cheerleader.

In a public restroom, I had my toddler with me in the stall, where she loudly exclaimed, “Wow! That’s a really big poop! Good job, mommy!" –singerchick97

My four-year-old son was misbehaving in a store, and I told him if he didn't control himself we were going to leave. He escalated, and I picked him up and carried him through the entire store. He was surprisingly putting up little fight. As we pass the checkout lanes he loudly says "Hey mister, put me down!" I didn't hesitate, didn't make eye contact with anyone, just turned beet red and kept marching out the door. –VVHYY

My youngest sibling is 10+ years my junior, so I grew up with him embarrassing me in public. The worst was around Christmas one year when we went to Walmart after going to a church service. The service was about the virgin birth and how no other virgin had ever had a baby before. My brother was probably about 4-5 at the time, so while he didn't know exactly what made someone a virgin, that service taught him virgins couldn't have babies. Anyway, we're in the check out line and behind us is a woman who is obviously pregnant. My brother points to her and says very loudly, "Look, that lady isn't a virgin!" –nuggetblaster

At the grocery store with my boys, 2 and 3. Suddenly, without any context, the 3-year-old broke his silence to scream at the cashier, "Mama's wiener is missing!" –LedZappa

This is actually pretty cute.

I was in Costco and my son (who was about 5 at the time) ran up to me, grabbed my hand and started pulling me towards the next aisle. “Dad! Dad! Look! Real ninjas!" whilst pointing at two women in full Burkas. –longmover79

Not me but my midwife. Pregnant with my second child, my three-year-old daughter asks why mummy’s belly is so big. She’s told there’s a baby in there. She turns to daddy and asks “do you have a baby in there too?" Dad replies gently “No, I’m just fat!" A few days later in the checkout line and there’s a very large lady behind them in the line. The little girl asks the lady “Do you have a baby in your tummy like my mummy?" The lady is kind and just says no she doesn’t, to which the girl responds “oh just fat then?" –notmax

My daughter is 16 months. When she is done interacting with someone she will dismissively wave her hand and say "All done! Bye!" My wife doesn't like it but I think it's funny and a total power move. –cybermericorp

How do you even begin to explain this one?

My wife had my 3-year-old at the park one day. She decided to pick up some litter to make the park look nicer so she was throwing away pop bottles, chip bags etc and he wanted to help. He stoops to pick up some cigarette butts and my wife says "leave those to mommy" (she wasn't going to pick them up but didn't want him to touch them either). A few minutes later he has gone to play. He tells another mom, "I'm finding cigarettes for mommy." My wife was so embarrassed and said she got the dirtiest looks from nearby parents who heard this. –Thisguysciences

When I was little (under 5) my dad would jokingly ask if I wanted a cold beer. I would always respond with "no." Until one day when we were in the grocery store, he asked if I wanted anything, to which I replied: "a cold beer" while we were standing in line. –foshjowler

Hopefully she didn't drink and drive!

I was with a group of friends and was asked if I drink. I said I don't really, and my daughter said, "But mom, you drink all the time." She had no idea the difference between drinking alcohol and drinking everything else. –TishraDR

My friend's kid once asked his mom's female friend where her boobs were (The friend had much smaller breasts than his mom). That was certainly awkward for everyone present. –Diplomat_Smurf

So that's where babies come from.

After his little sister was born my toddler announce to the parking garage that she "came out of mommy's magina!" So that was nice... –boneandbrine

This is so nice of the school, though!

My son came home from kindergarten with his backpack full of canned food. When pressed about the issue he confidently stated that he had told the teacher he was hungry and we didn't have any food at home! They had sent him home with the donations for those in need!! We got him to return the food the next day... It's a funny story we tell now but talk about embarrassed!!! –twillsteele

This one made me cackle:

My daughter was with me in a crowded dressing room and complimented me on my nice nipples. I could hear laughter from the other stalls. –laughingcow2012

I play Hitman 2 a lot, sometimes with my 3-year-old daughter watching. We were at the grocery store recently and there was an older gentleman who looked like he had just come out of a church service, he was all dressed up and shiny bald to boot. My daughter yells out, "Look, Dad! It's a Hitman!" –AxJokes

Was eating at a Chinese restaurant when the waiter and the cook were having a discussion in Chinese. 8-year-old daughter yells out, “WHY ARE THEY SPEAKING SPANISH?" Embarrassing to say the least. –younggohan81

When he was being humped by a puppy, and me yelling at the puppy to stop. "DON'T YELL AT HIM! HE LOVES ME!" I guess he's not wrong... –Rupispupis

Could have been worse!

At least you know she was listening.

Me and my 3 y.o were at my mom's house & to get her to leave I told her, c'mon we have to go home and take a shower, to make her laugh I said we need a shower because our bums are stinky. Later when we got home in a full elevator, my daughter turns to me and says, " Mom you need to shower because your bum is stinky." I was mortified. –mmartinho94

My guess is Toy Story 3.

After hearing the phrase in a movie, my little one yelled, "Put me down you idiot!" in church. –Librariankat98

Well? Why were you?

My daughter was practicing ballet. My 4-year-old son and I were in the room behind the glass which is full of families watching and waiting. I was showing my son YouTube videos to keep him calm. He says, "Why are we watching naked Spiderman videos?" –meta_uprising

Who's gonna answer it?

My mom loves to tell this story. We were at a Catholic mass. I was 2-3 years old. They ring the altar bell in mass at some point. They ring it, the church is dead quiet, and I screamed "Telephone!!!" –daleksarecoming

When I was little and we were on holiday, my dad used to get me to say I was younger than I was so we could get into theme parks cheaper. When we were on our way back, the gentleman at passport control asked me how old I was and I turned to my dad and said: “how old am I today daddy?" –Anonymousse228

Had my toddler son walk into the bathroom at Target with me. He immediately said, “oh man it stinks in here." Followed by... “ I think the smell is coming from those shoes" as he bent over looking under the stalls. –peepscantknowus

My son has a knack for remembering songs after only hearing them once or twice. I didn't realize that he knew "Let's Get It On" until we were at the supermarket and he started singing along really loudly. Funny, but also mortifying. –krissym99

This kid is my favorite.

My two-year-old had a short-lived habit of saying "See ya, suckers" when we would leave a place. –Dr_Treebeard

At a restaurant. Wife was late-term preggers with second child. Had been telling the first (the toddler) that her mom's belly was big because she had a baby in there. Large woman walks by our table. Toddler's eyes get big; she shouts, "Look, mom! That lady has a baby in her butt!" –keenly_disinterested

He was just trying to help!

While walking around the zoo, my son who was 5 at the time saw a guy in a wheelchair who didn’t have any legs below his knees. So when my son asked me why his legs looked like that, I didn’t think anything of saying, “he lost his legs." Obv in my head that just meant something medically happened and doctors had removed them, but as that’s pretty descriptive to a kiddo, I thought my answer was enough. I turn around for a second to look at an animal and my kid approaches the wheelchair guy and asks, “do you want me to help you find your legs? Maybe they’re by the tigers." Ugh. Thank god the guy laughed bc I wanted to die right then and there. –GenerallyUnlikable

While pointing to a random guy's chest at a swimming pool, screaming "Nipple! Niiiiiiiipple!" –SantaKrew Share this with a fellow parent!