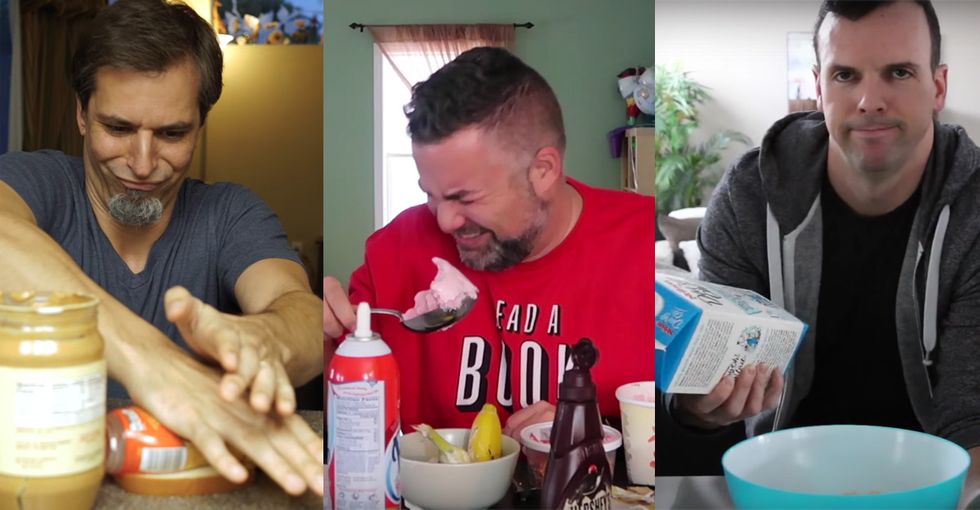 One time in the fifth grade, our teacher gave us what seemed like a pretty easy assignment — all we had to do was write down step-by-step instructions explaining how to put on a jacket.

Now, fifth graders are typically pretty confident about their ability to put on clothes, so naturally we figured telling someone else how to do it would be a no-brainer. But when it came time for the teacher to follow our instructions, exactly as we had written them, we suddenly got a whole lot less smug.

Sure, I knew what I meant when I said, "Put your arm through the sleeve," but watching your teacher struggle to literally push her arm through the fabric of a jacket's sleeve really drives home the point that things aren't always as simple and straight-forward as they seem.

That's the premise behind the Exact Instructions Challenge, a fun activity being taken on parents all across the Internet. In it, kids write very specific directions for completing an easy task...then their parents just do exactly what the directions say.

The Challenge was started by Josh Darnet, who got the idea from a friend whose science teacher had done a similar experiment back in high school.

He asks his kids to write out instructions for making a peanut butter and jelly sandwich. First, his son takes a crack at it. Unfortunately, he forgets the crucial step of putting peanut butter on the bread before telling him to "spread it around with the butter knife."

And things just sort of go downhill from there.

Yes, we have to agree — FAIL. His daughter's up next, and she hopes to avoid her brother's mistakes by being "extremely specific."

She seems to be on the right track with the PB half, until we get to the jelly and her dad has to "squeeze [the jelly jar] onto the other piece of bread."

Suffice it to say, watching other people screw up your PERFECTLY GOOD instructions just by...well, following them, can be pretty frustrating.

He gave the kiddos another shot to write new instructions...but got similarly hilarious results.

Of course the joke is really on parents, because kids will eat PB&J pretty much any way it's made.

Yeah, even if you have to wad it up in your hands. So according to them, it's always a win!

Check out the challenge that started it all in the video below!

Of course, part of the fun of the Exact Instructions Challenge is naming the next victims...er, I mean participants, and Josh Darnit tagged the Ballinger Family and the Eh Bee Family.

First up was the Ballinger Family, where the kids tried to teach their dad how to make orange juice.

There seemed to be a fundamental lack of understanding that not only does OJ contain oranges, but the oranges have to actually be peeled for the whole "juicing" thing to happen.

And also, you really shouldn't need to use so much Sharpie. But that's not ever the weirdest OJ recipe in the whole video.

What the heck is even happening here???

Find out in their video, below.

Next came Eh Bee Family, where things got a little dramatic!

When you have two competitive kids, they're going to want to win this challenge — even if your dad doesn't seem to have any clue what the prize might be.

Watch and learn how pouring a bowl of cereal can go terribly, terribly wrong.

Eh Bee Family passed the fun along to Bottlerocket, and they were pretty smart IMHO because they chose banana splits. Bottlerocket starts by saying he's making "the ultimate sacrifice for my kids" by entering the world of online challenges, which he's so far managed to avoid, but he's not fooling anyone. Eating ice cream is never a sacrifice.

You can tell right from the opening frame, though, that somehow even un-mess-up-able ice cream has gotten messed up.

Who's at fault? Find out in the video!

Eh Bee Family also tagged The Holderness Family, another YouTube fam powerhouse. They chose to test out their kids' instructions for brushing your teeth and making toast.

Turns out breakfast can be trickier than you think!

Honey, you're right to look concerned. I sure hope they have 911 on speed dial.

This should make for an interesting morning.

Next, The Holdernesses tagged Deva at MyLifeSuckers to get in on the fun (but hopefully no house fires)!

Deva's son sure does look confident that he's got this thing in the bag.

They tackle two seemingly simple tasks, making lemonade and applying lipstick. And as you might have come to expect by now, those tasks tackle Deva right back.

Sadly, I stink at applying lipstick in real life, but judging by the results I'm guessing this tutorial is not the way to go.