Parents Beware of the 'Momo Challenge,' a Game That's Allegedly Taken the Life of a 12-Year-Old Girl | 22 Words 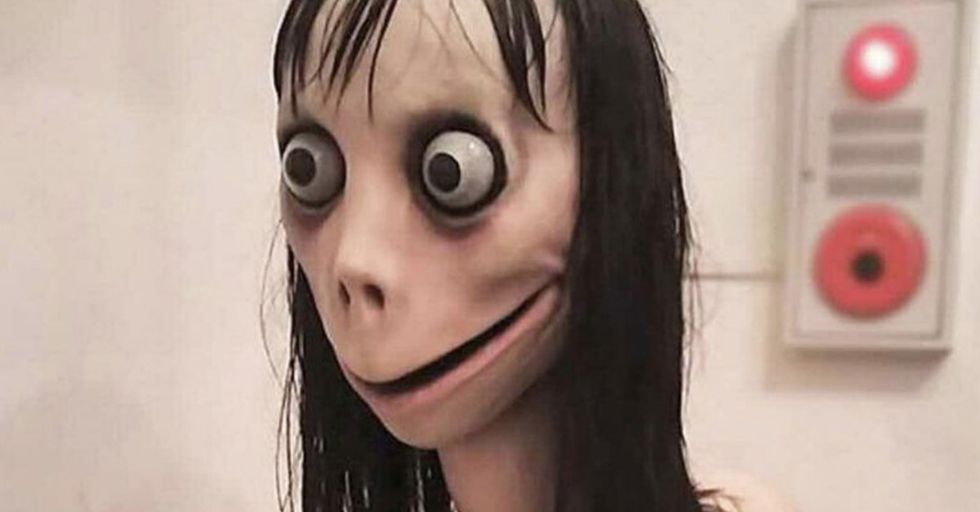 Parents Beware of the 'Momo Challenge,' a Game That's Allegedly Taken the Life of a 12-Year-Old Girl

The emergence of popular social networking sites ushered in a new era of Internet use and created an unprecedented opportunity for global communication. One major result of our hyper-connected world is the ability for images, videos, and trends to go viral — reaching millions of people within a very short period of time.

Internet virality can launch people to fame, as it did with Mason Ramsey when the boy was caught on video yodeling his heart out in a Wal-Mart and given the opportunity to sing professionally. It can also damage reputations, as is often the cause when offensive Tweets resurface or an unseemly secret is exposed. Sometimes Internet virality can even prove fatal.

Social media also gives online predators the opportunity to engage with vulnerable children from behind a veil of anonymity. The latest viral trend terrifying parents is the “Momo Challenge,” a game played via WhatsApp that encourages children to self-harm and eventually commit suicide. While Internet conspiracy experts are skeptical that the challenge is real, many remain concerned about the risks of exposing their children to an unpredictable online world.

According to TMZ, even Kim Kardashian has gotten involved, begging YouTube to take action against these videos.

The Internet can be a scary place.

The web is just an extension of the world as we know it, with an extra level of anonymity that can often bring out the worst in people.

Getting yelled at by someone hiding behind an avatar is an unfortunate staple of social media.

Other instances are definitely creepy but can be shaken off as just another digital ghost story.

Disturbing videos like the one of Mereana Mordegard Glesgorv smiling sparked rumors of viewers going mad by the end, but the stories remain unconfirmed.

But there have been tons of scary instances in which online violence goes beyond the screen.

Particularly among young children, who are especially vulnerable to cyber harm.

For example, the ‘Slenderman’ started out as just a creepy fictional character.

The persona was invented by a user in the Something Awful forums in 2009, but eventually, the Internet mythos around the character’s real existence resulted in a young girl’s death.

Two 12-year-old girls stabbed a classmate in the forest outside their home to impress Slenderman.

A Wisconsin teenager accused of stabbing a classmate in 2014 to win favor with a fictional internet character named… https://t.co/yFFSALdFGi
— CNN (@CNN)1517529065.0

The victim was eventually found after she crawled to a road and recovered six days later. Her attackers are currently serving out sentences in mental health institutions.

The image alone is extremely unsettling.

Momo’s image is actually that of a sculpture created by artist Keisuke Aisawa, of the special effects firm Link Factory. The creator denies any involvement with the current popular use of the image online.

That’s because it’s apparently being used to encourage extreme violence.

The “Momo challenge" sends texts or messages via WhatsApp to unsuspecting children, or engages with them through YouTube urging them to respond to the creepy creature.

According to reports, once a child responds Momo begins sending disturbing messages.

The aggressor behind the Momo avatar allegedly provokes children to perform dangerous tasks.

First, they are reportedly instructed to gradually isolate themselves.

Momo makes them fear for their lives.

The children are told that if they don’t comply with Momo’s demands, the creature will hurt them and their families.

Reports of Momo are beginning to surface from around the world.

Lyn Dixon, a mother from Edinburgh, Scotland, discovered her eight-year-old son holding a knife to his neck after receiving instruction from the disturbing cyber criminal.

Now, Ms. Dixon says her son is scared to be alone after interacting with Momo.

“He showed me an image of the face on my phone, and said that she had told him to go into the kitchen drawer and take out a knife and put it into his neck," Dixon told the Daily Mail.

While Dixon was able to stop her son in time, there are other reports of the challenge resulting in more devastating cases.

The suicide game is believed to be the cause of death for a 12-year-old girl in Argentina who hung herself after an exchange on WhatsApp, however, police have yet to discover a specific link between the deceased and “Momo."

The Momo Challenge was also linked to the suicide of a 13-year-old boy in France.

The Belgian Public Prosecutor's Office reported that the challenge was the cause of death after the boy’s father filed a complaint against the violent game.

Lyn Dixon went to her son’s school after the incident to spread the word about Internet safety.

Her story prompted other mothers to come forward with similar accounts.

However, some remained unconvinced the Momo Challenge is the real cause behind these incidents.

It wouldn’t be the first time an Internet rumor was spread as a legitimate threat, only later to be revealed as nothing more than a hoax.

In 2016, the ‘Blue Whale Challenge’ was deemed the cause of deaths around the world.

The so-called “suicide game" was targeted at teenagers, challenging them to complete a series 50 of self-harm tasks that concluded with them taking their own lives.

People were terrified of the evil social network phenomenon.

Until it was determined that none of the reported suicides were actually linked to the challenge, or even confirmed by authorities.

Recently the “Game of 72" made headlines.

The challenged involved teenagers daring each other to disappear for three days, and terrified parents who feared their kids would become vulnerable.

But that was debunked too.

Police reported that the only pieces of evidence were Facebook posts by concerned parents, none of whom knew any actual victims of the challenge.

The lack of screenshot evidence for a game that is supposedly viral is inspiring skepticism.

The Internet safety activist appeared certain that the Momo Challenge was not a real threat.

So, the Momo Challenge is likely not to blame for these tragic events.

But it’s clear that social media and the Internet can be a powerful medium for violence, particularly through cyberbullying.

Rumors of games like the Momo Challenge often inspire copycats.

I wrote about why coverage of the "deadly suicide game" the "Momo challenge" is incredibly stupid and dangerous, an… https://t.co/AWX82PXYwz
— Amelia Tait (@Amelia Tait)1551098466.0

With the global attention the story has been receiving, it’s likely similar threats will increase in frequency.

Even though a scary sculpture cannot come to visit you in the middle of the night, it’s good to know how to protect yourself online.

And how to ensure children aren’t exposed to images and messages that could upset them.

For parents whose kids are online, foster an open dialogue about Internet safety.

Lots of calls about "momo" this morn after a viral Facebook post was shared over the half term holidays. Some sens… https://t.co/Qy4ulJ0eYo
— POSHelpline (@POSHelpline)1551094962.0

Just like stranger danger on the street, kids need to know that not everyone online has their best interests at heart. Discuss which websites are and are not appropriate, and encourage kids to come forward if they encounter something disturbing.

Cultivating a healthy skepticism around the Internet and withholding personal information can go a long way to protecting a child.

And check in regularly.

Kids may not be quick to come forward with information, especially if they fear consequences from some unidentifiable threat. Ask direct questions and block risky identities liberally.