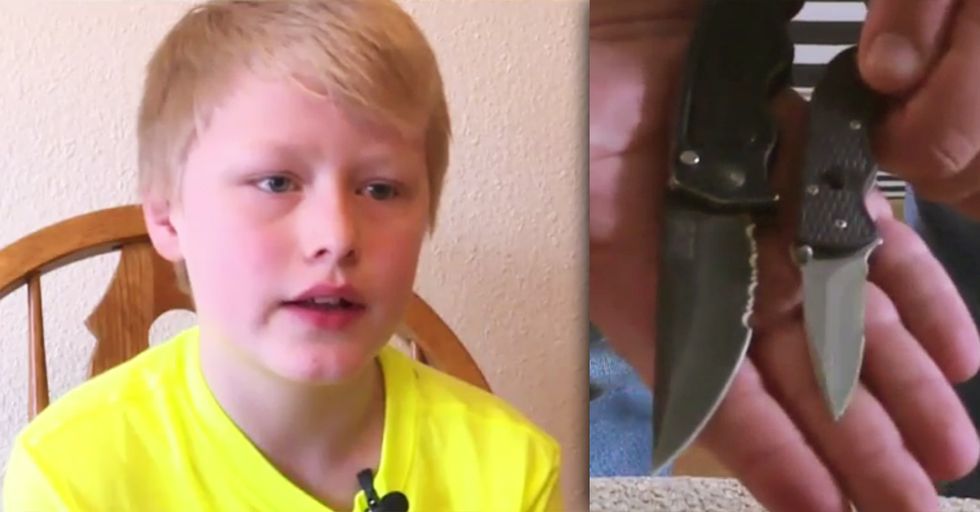 What would you expect to happen if a child pulled out a knife and held it a few inches from a classmate's face?

One family in North Dakota is "shaking, to say the least, [about] what could have happened" when a boy did exactly that — threatened their eleven-year-old son with a knife at school.

The boy's parents, Ashley Holder and Dustin Lasyone, are waiting for the district to step up with a far stricter punishment than the school's principal dealt out.

Scott Renville, a sixth grader at Berg Elementary School, was playing that classic "made you flinch" game with his buddy after class. That's when he saw another student and tried to include him in the game.

The other student apparently wasn't into it, though, because in response to Renville's, "Made you flinch!" the boy replied, "Do it again, I dare you." That's when he turned around and saw his classmate had pulled a knife, which he reportedly held just inches away from Renville's throat.

Other students quickly stepped in and made the boy put the knife away, though it was later confiscated by a teacher and given to Berg Elementary Principal Shawn Leiss.

What could possibly make a situation like that worse? "No one ever called to inform us of the situation that had occurred," said Renville's dad. "My son was the one who informed us what had happened. So my wife then contacted the teacher. We never heard from anyone from the administration or from the school board for three days." By then, the student in question was already back in school, following one day of suspension at home and one day of in-school suspension.

Renville, however, has been out of school for almost two weeks.

The school district offered to move him into a different classroom, but frankly that might not be far enough away from a kid who still makes Renville uncomfortable. "I don't really feel safe around him anymore," he confessed. “He wants to move back to Watford City because he wants to be completely out of this situation. He wants to be away from this kid," said his dad.

Three days after the confrontation, Renville's dad finally met with Principal Leiss; you can hear it for yourself in the audio recording below.

In it, Leiss admits multiple times that he made "a pretty big mistake" by not asking Renville for his side of the story, not talking to any other witnesses, and by not contacting his parents right away. Uh, yeah, YA THINK? However, Leiss also defends his actions by saying that, because the boy didn't have any other warnings or detentions on his record, he didn't see this child as a threat. "I try to remember that sixth graders are kids. I don't want to overreact," he said. Um, overreact? Is there such a thing as overreacting to a kid with a weapon at school? Maybe there is, as Renville's own father was a lot more laid back about it than most parents would be. "My look on bringing a knife to school, I don't think overwhelmingly it's a big deal," he said. He did, however, make a distinction between bringing a knife to school and "pulling it out in a threatening manner," which should be taken more seriously. Leiss agrees that there's a lot of gray area in today's society, making it complicated to discern what's a big deal and what isn't. "It's kinda like how it's okay for some black guys to call each other 'hey n*****,'" Leiss explains in the worst, most racist analogy in the history of parent/principal conferences. "Somehow that's okay, but if somebody else does it it's not okay. It's just really hard to navigate and find that middle ground." Just...wow.

It states that "Berg provides a safe environment for children. Last week I dealt with and took action on an incident. I can't control what another individual reports and perceives on an incident, but I can tell you as the building principal that Berg continues to provide a safe environment for its children." Technically, the school handbook says that each principal can decide on a case-by-case basis to suspend or recommend expulsion for every student. It also says that possessing a weapon is subject to suspension or expulsion, but it doesn't specify which. "I feel like expulsion or an alternative school would've been the proper consequence," said Renville's dad.