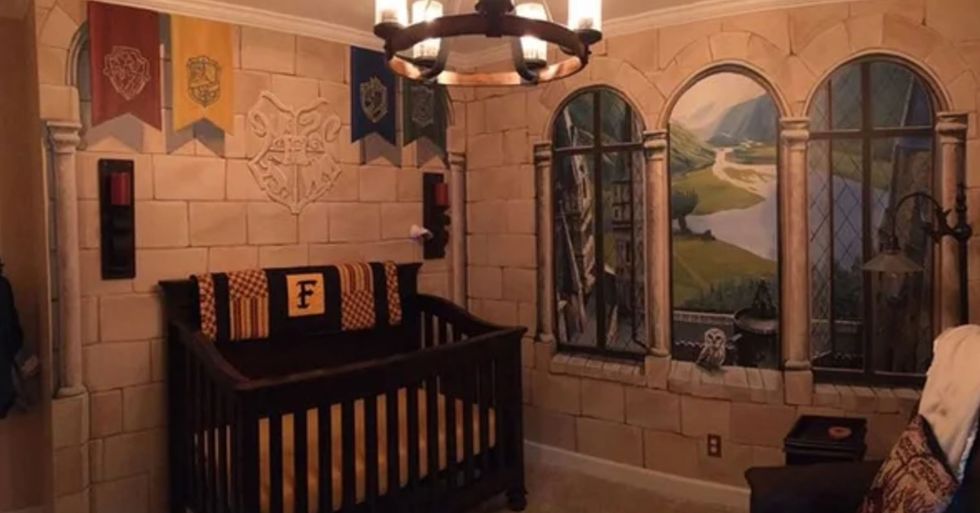 For fans of the Harry Potter universe, there has been one thing that's been persistently disappointing: the fact we can't actually step into the magical world. Wanting to take a lesson at Hogwarts, or enjoy a stroll down Diagon Alley has been a pipe dream for many Potterheads. But now there's been some exciting news that means one fan can actually get a taste of what it's like to live in Harry Potter's universe.

One set of parents managed to create the perfect Harry Potter themed nursery - and the pictures are truly magical.

Kaycee and Casey Daniels have created the most amazing Harry Potter themed nursery for their kid!

And it's what muggle's dreams are made of.

Look how happy they are!

The crib is something to behold.

Imagine the magical dreams you'd have in there!

But even better are those murals.

You can look out of the "window" straight onto the Hogwarts grounds.

That "candlelight" chandelier is truly atmosphere. Diaper changes have never felt so quaint!

The portraits are too cute.

We want this Dumbledore painting for our homes!

The Hogwarts Express is there, too.

Because where would anyone be without their transport to school?

Dobby's there to look out for him.

So you know the baby is in safe hands.

And a little private joke.

Fans of the Harry Potter books will know!

This nursery is basically the ultimate playground - we're feeling a little jealous!

Although we bet he's having the most fun.