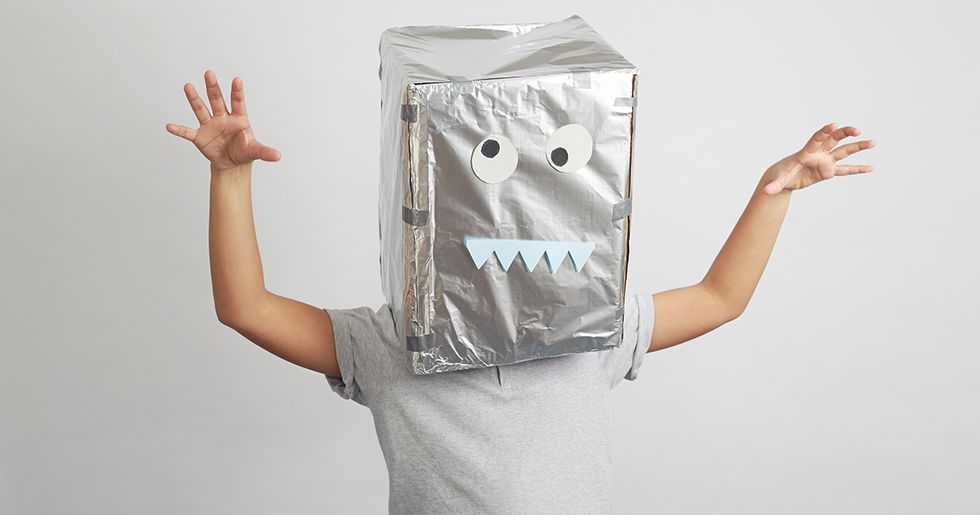 Parents don't always have control over who their kids befriend, as much as they'd like to.

Most of the time, that's totally fine!

But sometimes, your kid comes home with a friend like this:

Some kids are just weird. Here, 19 parents share the strangest kids their children have ever brought home. Do you have a story of your own?

This kid lives down the road and shows up to take things from my kids: their bikes, their shoes, literally anything that isn’t bolted down.

It’s weird when he takes their bikes because he bikes to our house.

I’m pretty sure he doesn’t go to school? It is usually after the kids are in class he will just walk up in our house and be watching tv.

My son brought home a kid to play at our house when he was in 3rd grade. This kid was a giant bundle of nervous energy and always getting in trouble. Doing things he wasn't supposed to. It didn't matter how many times you warned him; he didn't seem to listen. It was the next day that I discovered one of my son's Super Soaker water guns lying in the flower bed. When I picked it up, I noticed a strange smell of gasoline. He must have used the 1-gallon plastic gasoline can I stored next to my mower and filled the gun up with flammable fluid. We banned him from coming over again. –spangdooler

My step-daughter brought a girl back after school once, a very odd girl. They'd have been about 12 at the time.

So I asked if she wanted to stay for tea which she did.

Then a little while later I asked when her mum was picking her up and this was her reply, "I have asked mother to collect me at 17:38. So that is when I shall leave, oh and if I feel like coming tomorrow can we have something better for tea."

She was not back again tomorrow –donbanana

The next one is legit creepy.

Lol. My sister had a friend when they 7 or so. She had her spend the night.

The next morning, she got up, went to the kitchen where my mom was doing something and said very emphatically "FOOD."

Now, my momma isn't one to take any guff, so she turned around, cocked her eyebrow and said, "Excuse me?".

One that when things did not go his way, unzipped his pants and peed all over one of my kids' toys. He was 9 at the time.

We sent him on his way, with the toy in question (an old parking-thingy for Hotwheels that my kids didn't play with anymore).

Within 5 minutes, the kid's dad is at the door. Dad asks nicely why we made his child take the thing with him.

We explain, also nicely, that the parking garage he is clutching in his hands has been urinated upon by his son.

He understood and went back. Son came back 5 mins later to apologize. –YouKeepThisLove

My brother once brought home a tiny ball of fluff. He had a very active imagination and insisted that it was a mouse that he had rescued from a sewer drain. It was pretty obviously just a cotton ball or pompom, so my parents decided to humor him when he named it "Fluffy." About 10 minutes later the cotton ball jumped or moved or something, and my parents freaked out. Turns out it actually was a wild mouse that he rescued from a sewer drain, and by that time my mom had allowed him to keep it. My brother was heartbroken when they explained that wild animals lived in the wild, and we couldn't keep Fluffy here. –Kyocrazy

My brother brought home a friend that drank his milk with ice in it –sarcasmandirony The next one is a doozy.

My daughter had a friend in first grade who creeped me out. My daughter was a quirky kid herself and didn’t fit in with the mainstream girls so at first, I was happy she found someone. But this girl, Becky, was so weird. She never spoke directly to me, and whenever she came over to play, she always carried this cardboard box. She was very pale and wore her hair in two very tight pigtails. Inside the box was a large chunk of styrofoam with these huge bugs she had pinned to it and labeled in marker. Giant centipedes, house spiders...I’m not sure where she got them. I was so happy when that silent, strange girl moved away at the end of the school year. –AlexandraPants

Not a parent, but my older brother once brought a friend home when there was no one in the house. My parents get home (having never met this kid) and he suddenly swivels around in my dad's office chair and shouts in his best bond villain voice "I'VE BEEN EXPECTING YOU!" –carterhatesmemes

My sister had a friend growing up who would just magically find a way into our house on occasion. We would all be gone for the day and come to her sitting on the couch in the living room even though we had locked the doors on the way out. Super weird. –ZM_Tendie_Bear

Not a parent, but as a former child, I have an answer to this. I had a friend growing up who claimed (for a very long time) that she was a fairy and would turn into one of those '90s butterfly hair clips when nobody was looking. I also watched her grab a handful of grass from my front yard and eat it, dirt and all because she insisted that was part of her normal diet. Strange kid. –MyStageName

My sister once brought home a Steiner school student once (no bloody idea how she met her given the Steiner school was on the other side of town and she was 7).

She was a real fruitcake.

Weirder than my friend whose family still acted like they were still living in East Germany according to my parents. –Plethora_of_squids

The next one is actually kind of hilarious.

There is this one kid my daughter brings over often that legit speaks exactly like Michael Jackson. –rlw0312

The kid had been to our house many times before and was at least 7 at the time.

He and my son were playing outside when the kid pulls down his pants and drops a deuce in my yard. The dad saw it and berated me for “taking my eyes off of him."

A few other things have occurred with him, so he’s not allowed to even come in my yard anymore. –BaconSlapThatHoe

Not a parent, but I brought home some weirdos.

In 9th grade, my “best friend" of the month needed a ride to the public library, and my mom agreed to give her one.

Every time my mom used the turn signals, this girl started imitating them, making loud clicking noises until they turned off.

I questioned this, and she said she just really liked the sound.

At one point she complained about being hungry and proceeded to pull a several-days-old pizza crust out of the bottom of her backpack and eat it. I don’t think we hung out again after that.

My mom still brings up “that girl with the clicky noises" from time to time. –Limpslinky

My oldest sister brought a friend by after school. This kid was apparently weird in many ways, but one, in particular, stood out.

My sister went to my mom who was making a snack in the kitchen. She started to complain that her friend kept telling her that her father had shot the president.

Turns out to be true. Junie Oswald was her original name, don't remember her new name. Bragging about that was really strange. –mel2mdl

Not a parent, but had a friend who, when she was in middle school, brought home this girl who later proceeded to eat an entire container of chocolates. She then ran down the street full blast, went into a fancy restaurant and threw up on a couple of newlyweds enjoying their first meal as husband and wife. –ItsVesper-time Share this with a parent who would understand the struggle!