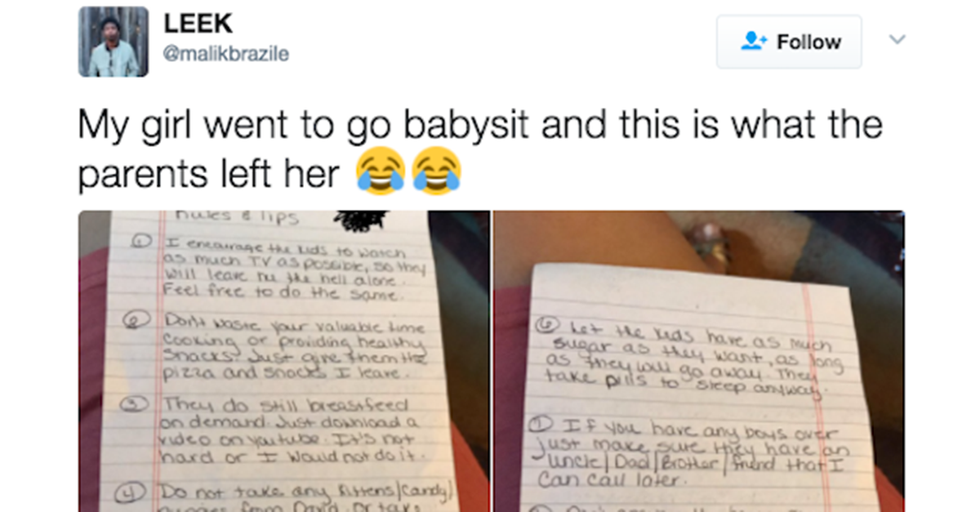 Cool Mom Leaves Honest and Hilarious 'Instructions' for Her Babysitter

There comes a time in every parent's life that they have to turn their kids over to a babysitter.

Normally, it's a frightening and uncomfortable passing of the torch. But for these awesome parents, they're very...relaxed about the whole thing. It's hard to tell if they're trying to be funny or if they're just as chill as the note would indicate. Take a look and judge for yourself. Then look at the hilarious social media reactions once this note went viral!

This dad's daughter was the babysitter, and she was smart enough to take a pic of these awesome instructions for how to watch the kids. He posted it on Twitter, and it became VERY popular.

You can read the note there, but basically, the parents are like "Don't do anything."

The breastfeeding thing is definitely a joke, though.

I wish all parents were this relaxed and funny.

The truth is, the kids WILL be fine. They always are. So these parents aren't going to freak and micromanage.

People were crying "FAKE," but the note's real and so are the parents.

In case you need proof...

Here's a text from the babysitting girl to her dad.

I think the girl and her dad picked up on the joke pretty quickly.

Yeah, what does "elderly handwriting" look like? And who says these parents are "elderly?"

Parents tend to agree: this super-chill approach isn't just nice. It's smart. The stress of parenting will eat you up, otherwise.

Others noticed that this note, as funny as it is, was clearly the work of someone who had suffered through babysitting details themselves as a teenager.

Others thought maybe the mom was trying a little too hard to have fun with the babysitter, who clearly was thrown for a loop by the prank note.

The prevailing opinion, especially among mothers themselves, is that they wish they'd thought to leave this clever, sarcastic, and painfully true note.