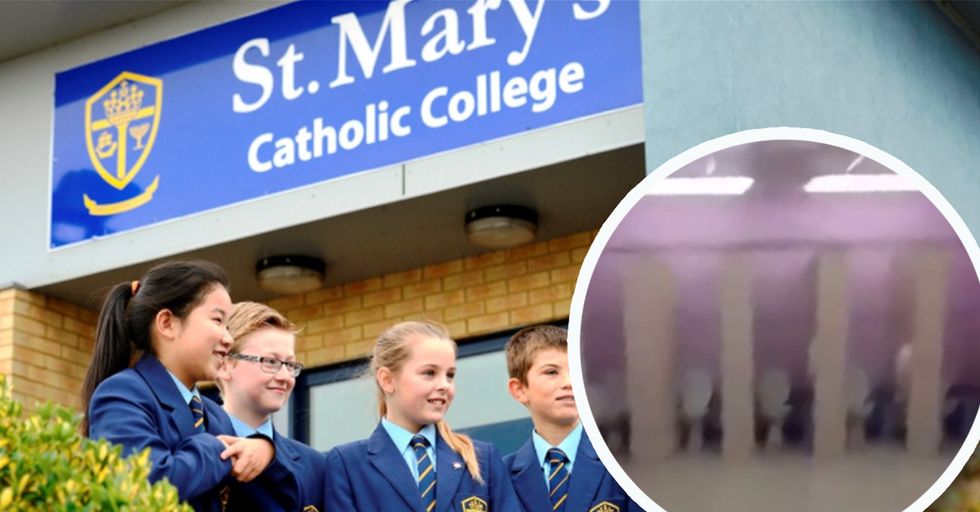 Quick, name a place where you'd prefer to have some privacy!

Did you say the bathroom?

The bathroom is the perfect place to get some privacy... unless you're a student at St. Mary's College in the U.K.

St. Mary's College — a secondary school in the U.K., had a problem with students smoking in the bathrooms.

And that's not all. Apparently, the students were also skipping class and bullying their fellow classmates. Sort of like what happens in most secondary schools. But whereas most schools would give students detention or take other disciplinary actions, St. Mary's College decided to do something a little different.

They removed the wall separating the girls' bathroom and the rest of hallway.

Brilliant! What a great idea, right?

As you might expect, reactions to the removal of the doors have ranged from "Why in the world would you do that?" to "What the **** is wrong with you people?!"

According to The Independent, parents have started keeping their kids home from school in protest to the new bathroom layout. "My daughter was bullied in year 10 and that was in the classroom, the yard, and the lunch hall, so thinking that taking a toilet wall down will stop it is stupid," said Tara Hodgson Jones, whose young daughter attends the school.
"As for smoking, put alarms in. As for skipping class, use frosted glass so teachers can see shapes when they walk past." Wow! What great ideas! But they apparently make a little too much sense. Removing the wall isn't even the worst part of the bathroom's new open layout...

Look closely at what's on the other side of the hall from the bathrooms:

A security camera. And there's a classroom across the hall, too. Nothing could possibly go wrong here, right?

While you're at it, St. Mary's College, why not just do away with restrooms all together?

St Mary's College is introducing a new classroom chair to stamp out bullying and smoking in the toilets. If you obj… https://t.co/LA8hO7kO6P
— Steve Brookstein (@Steve Brookstein)1516620364.0

It's not as if we're trying to build a society or teach children how to function as humans or anything. There is just no fathomable reason that such a drastic overhaul had to be made.
The girls using these restrooms are between the ages of 11 and 16. Interestingly enough, I bet you won't catch any of the teachers using these restrooms...

In response to the outrage from students and parents, the school offered the following (typo-ridden) statement.

The letter — which was apparently written by someone known as the "headeacher" — states that the decision to tear down the wall was made "with the intention of improving the learning environment" for the students. Which part of having to use the restroom in full sight of your fellow students is good for the learning environment, again?
The letter also states that the school will be adding a privacy screen to replace the wall that was taken down. Privacy in a bathroom?! What a novel concept.