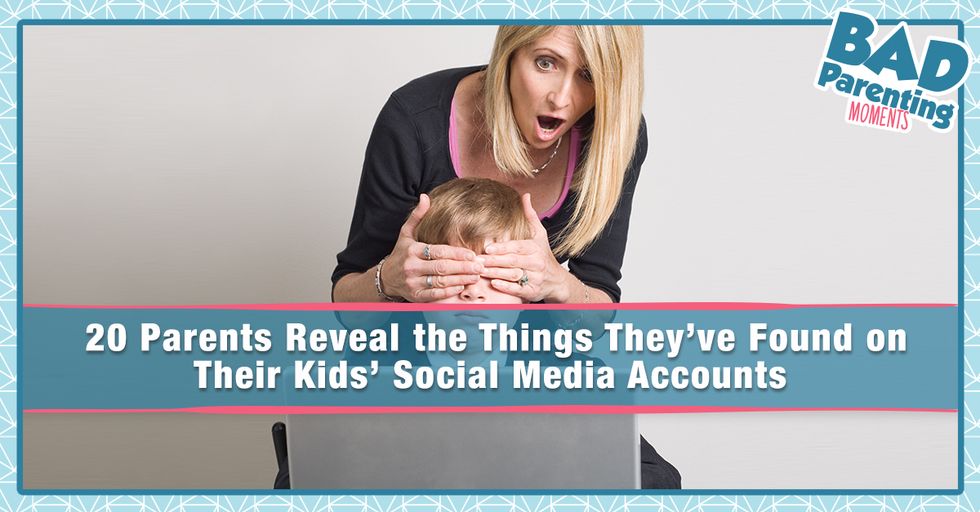 Kids and the internet don't always mix. The internet is a vast place, mostly full of dog memes and uh, some other things. Sometimes kids get curious about the other half of the internet that isn't dog memes or videos of children opening boxes of toys on YouTube.

That's when the awkward stuff starts to happen. And these parents and family members were the ones to discover what the kids in their lives were doing out there on the World Wide Web.

Spoiler alert: they probably were better off not knowing.

I'm so glad I didn't have social media when I was a kid because you know this would have been all of us at some point.

I found my stepdaughter’s musical.ly account. She had a bunch of poor attempts at s*xy belly dancing to various Evanescence songs. -_flam_ingo

This is why we need better Sex Ed in schools.

Kids: your search history will betray you.

This was before my son was on social media; he was 7 or 8, and he asked if he could have some "alone time" in the office. I looked at his search history: "big b**bs" (which turned up weird humongous photoshopped b**bs) immediately followed by "little b**bs" and then "hot grils" which turned up page after page of Weber grills. He's 18 now and has no memory of this. -Chickiepie

This is so funny and disturbing at the same time.

My little brother, 16, just got his first somewhat serious girlfriend. He's known her for about three months, they've been officially a thing for about three or four weeks. On one of my elder-brotherly snoops through his Facebook messenger account, I found that at some point within the three weeks they've been going out, they had a fucking professional couples photoshoot done. It honestly looked like the sort of photos that would announce an engagement. I've never experienced a feeling like what I did when I saw those pictures. -hamsterbars

Saw my 12-yr old brother's search history once. Was literally "b**bs butt and also vagina." -princessfairykitten There are more internet discoveries on the next page!

Something to hold over your sister's head for years to come.

I once found my sister trying to search "sexy boy penies" She might have just missed an S, but I still find it hilarious. -seizuresquirrel

Sometimes, surprisingly, it's not something dirty.

That my 12-year-old son searched for "pro study tips." No joke. My son. Trying to study harder. Never a million years and lives would I have expected this. -AlexInNapa

When my twins were young, elementary school, they were looking up the Simpsons and accidentally came across cartoon Simpson's pornography. The computer was in the living room, so I heard them giggling and turned to see two guilty little faces. So hard not to laugh and so disturbing! What a conversation... The sight of Milhouse and Lisa is forever burned into my retinas. -pywhacket

This definitely got this household on some government lists.

Not a parent, but my cousin one time got onto the computer when he was 11 or 12 or so and searched for "naked 12-year-old girls." I was there when his stepdad checked through the browser history, and needless to say, he and my cousin had a chat about acceptable search terms. -sloasdaylight

Some games are not meant for children.

Not social media but once caught both of my nieces playing an animated game online where the objective was to spank a cartoon butt with a paddle. Every time they'd "swing the paddle" at the butt, it would emit the sound of a woman moaning. They couldn't understand why the game was inappropriate and were laughing hysterically while playing. -LipstickInLiterature Oh, we aren't done yet. More stories on the internet gone wrong on the next page.

At least this kid is clever.

I went through my 13-year-olds cousin iPad. He had searched “cream pie," “girls doing a cream pie" and “cream pie videos." After, searches for “apple pie," “pizza pie," “peach pie" and “raspberry pie" came up, presumably to disguise his actual aims. -sledge8234

Hm, not exactly, but you're on the right track?

It's not just kids who are bad at the internet.

Can I do the inverse? My dad recently opened an Instagram account, and within 10 minutes of having it, managed to accidentally upload a screenshot of our wifi password to it. Like, I have no idea how he managed that. Even put a filter on it, for some reason. -TheeAJPowell

Checked my 11-year-old sons search history to find a number of interesting questions... Do men grow vaginas? Will my penis disappear when I'm 18? Will I become a girl? How do I save my penis? I asked him about his search history a couple days later, and he told me that some kids in his school told him that when boys turn 18, they turn into girls and lose their penis. Those bastards. -ianmac17

Kinda Close. So I have a 2-year-old and a 7-year-old. They both love to watch kids on YouTube. Mostly these annoying "toy unwrapping videos." I don't know. Anyhow, the other day I was working on my computer, and they were playing Play-doh. My 2-year-old comes into the room and asks my wife (while I'm listening) "mommy! I made this!" My wife: "Oh! That's awesome!" 2-year-old: "do you like it? Let me know in the comments." My wife and I: D. E. A. D. -Perceptions89 There's more! Keep reading.

When you find out your kid may not believe the Earth is round.

My kids are too young for twitter or Snapchat, but they love to watch Youtube. I started getting notifications a few months ago from people replying to "my" comments on conspiracy videos. Found out my son has a curiosity about flat-earthers and doomsday preppers. -musingaloud

Nobody wants to have this conversation with their dad.

To be fair, this kid could just have been wondering what movie theaters in Virginia were playing Star Wars.

When he was 8 or nine - a google search for "Star Wars Virginias." -HereHaveAName

I'm embarrassed for him.