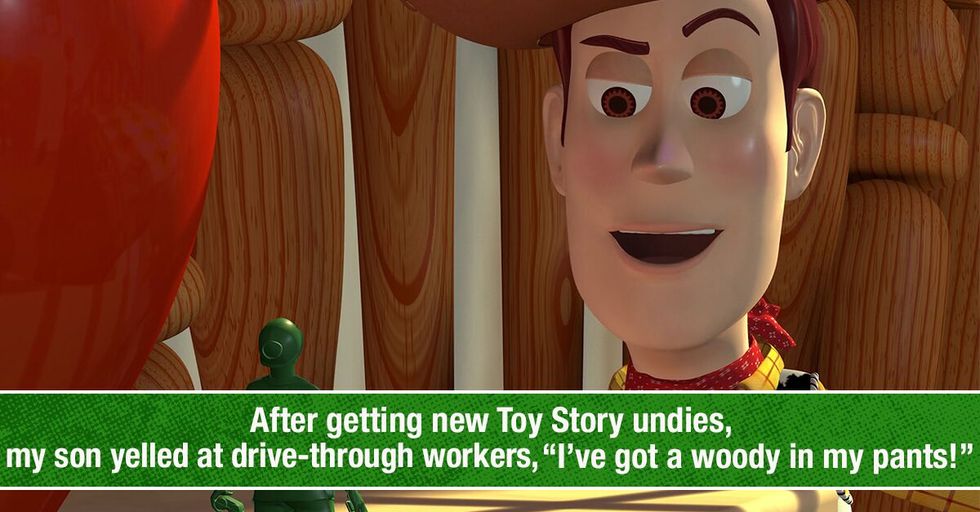 Being a kid is great because you're still innocent enough to take that verbal filter and throw it right out the window, saying whatever pops into your head without worrying about how people will take it. After all, you're just a kid!

Your poor parents are the ones standing there trying not to visibly cringe when their kid tells a stranger that "It's pussy time!" (This will make sense in a minute.)

Let's just say it's not exactly a milestone you'll be putting in the baby book. Just ask the people of Reddit, those brave souls that shared the most embarrassing things their kids have said in public.

Is it a puppy? Tell me that it's a puppy!

You scream. We all scream out of embarrassment, but at least there was ice cream.

Did he add "all the time" himself or does mom maybe some issues she needs to get on WebMD about?

And young kids who portend death on the elderly will be banned from eating the Bit-O-Honeys that they carry around with them.

Snickers and wine? Sounds like a pretty great evening, to be honest.

It might be time to have a "talk" with the little one, before the authorities come and have a talk with you.

Well, technically speaking, do you know that he wasn't a pirate?

"It was a football, on my face! I swear!" Still sounds kind of weird.

Technically she's right. But you should probably still have a word with the nice lady at parent-teacher conferences.

No Ifs, Ands, or Butts

Maybe start doing some heavy squats to firm that thing up?

Oh look, now Mommy is adding another bottle to the cart! And ice cream. Don't judge.

No, you had something removed, my dear. There were no new additions.

And why do you ask so many questions? Then again, if you have a beard on your bottom, you might want to look into waxing.

All I can picture here is that classic Far Side cartoon where the lady is looking for her dog and it's stuck in the crack of her (large) butt.

Well, one could say that they both screw people for money at times. But thank goodness they got that all cleared up. Eight is so young...

And then mommy tells him she has a headache. Again.

Of course it happened at a Chick-Fil-A.

Does that mean that she was white chocolate? That sounds like a really bad rap name: White Chocolate. They could open for Vanilla Ice.

Yes, and mommy drinks because you cry. So really, who's to blame here?

I think this one wins. The rest of you can go home now.

I think a teenager can have both at the same time...

Now You See Them

Now you, well, still see them because unfortunately, you couldn't get out of there as quick and swift as a ninja.

This would be a really cute story if her middle son wasn't 34 years old. Just kidding...I think.

At least she waits until you go to bed. That's just great parenting, people.