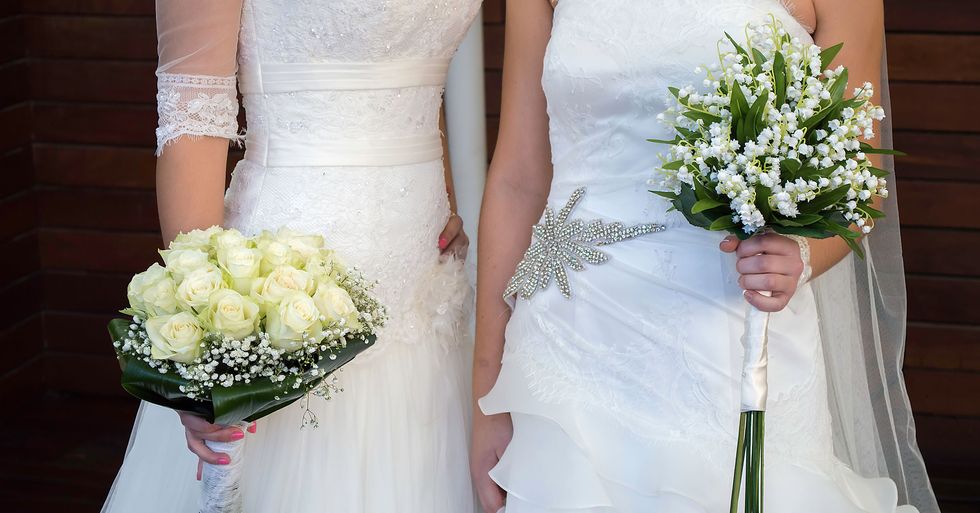 Reddit users have been left stunned after a mom admitted to taking back money she had saved for her daughter's wedding after finding out she's marrying a woman.

Sadly, this is just the tip of the iceberg of the story...

A mom has gone viral online this week for all the wrong reasons.

People have been left disgusted after reading her post about her daughter after she came out as bisexual.

Sadly, this discrimination can often take place in the home.

Many LGBTQ+ people face homophobia and transphobia from those closest to them.

It's a heartbreaking reality for so many people.

And this week, a thread on Reddit has highlighted this, after a mom made an awful confession about her daughter.

People have been left completely stunned by what this mom had to say.

The mom began by explaining that she and her husband saved up a lot of money to cover her daughter's college fund.

But things didn't work out how they'd planned.

"She ended up getting a scholarship to cover a lot of her college so we had about 20k left over, we offered to give to her at the time and she said she'd rather we keep it for when she gets married and we agreed," she wrote.

Now, this is where things to start getting extremely problematic.

"About 4 years ago my daughter came out as bi-sexual and started dating a girl, this shocked us a lot because we never saw her as the type," the mom stated.

She went on to say that she and her husband were "really upset," that their daughter was dating a woman.

"My husband and I were really upset because we loved the idea of her having a husband and a family, grandchildren for us."

She then whips out the classic "we just thought it was a phase" line.

"We thought it was just a phase but 4 years later they are still together and they got engaged last month," she writes.

Her daughter and her wife-to-be began naturally discussing plans for their wedding.

Which didn't go down too well with this mom.

The mom noticed her daughter had "20k mom and dad" written down in her budget plan...

"They came over to visit and do some wedding planning, she got her journal and it had the finances they put aside for the wedding as well as ‘20k- Mom & Dad’. I saw this and told her that we were planning on using that 20k for renovations now."

Her daughter immediately questioned her parents...

"She questioned us and we were upfront and said we agreed for her to use that money under the assumption she was marrying a man."

Her fiancee began to get upset, calling her future in-laws homophobic.

"Her girlfriend got very upset and started calling us homophobic, and my daughter just sat there letting her go off at us."

"Then my daughter said 'that money was mine and I had it all planned out to use it towards the wedding.' Well no it is our money that we saved with a specific use."

Her daughter vowed to never speak to her parents again.

"She left in a huff and told us to never speak to her again."

If that all doesn't sound bad enough...

The mom goes on to question whether she was in the wrong or not. "I think she is being very ungrateful but my other daughter has now turned on us as well and said we are terrible parents. I am not homophobic I respect same-sex couples it is just not what I wanted for my daughter. AITA?"

Shockingly, people had to explain to her that she was, in fact, massively "in the wrong."

"You are being unsupportive and homophobic. And it's not even about the money, it's about how you refusing to give the money clearly shows that you don't consider her relationship valid or good enough. It shows that you think less of her because of her sexuality, and that's horrible," wrote one user.

Many reminded the mom that this clearly isn't about the money.

"To be clear, you aren't obligated to pay for your daughter's wedding," wrote another user. "If you could no longer afford to contribute because your financial situation or priorities changed since the last time you discussed the money and its intended purpose, that would be understandable. But by your own admission, the only reason you aren't following through is that you don't approve of her same-gender partner. We have a word for that. It's called homophobia," wrote another user.

After the huge reaction...

The mom penned an update to her post: "Wow I wasn’t expecting this reaction. Thank you for the lovely messages threatening me and calling me a homophobe. I have rethought my stance and I will be trying to be more understanding of my daughter however I know to never go to this forum again," she wrote. For more LGBTQ+ news, scroll on to find out which popular cartoon character has become out as gay...