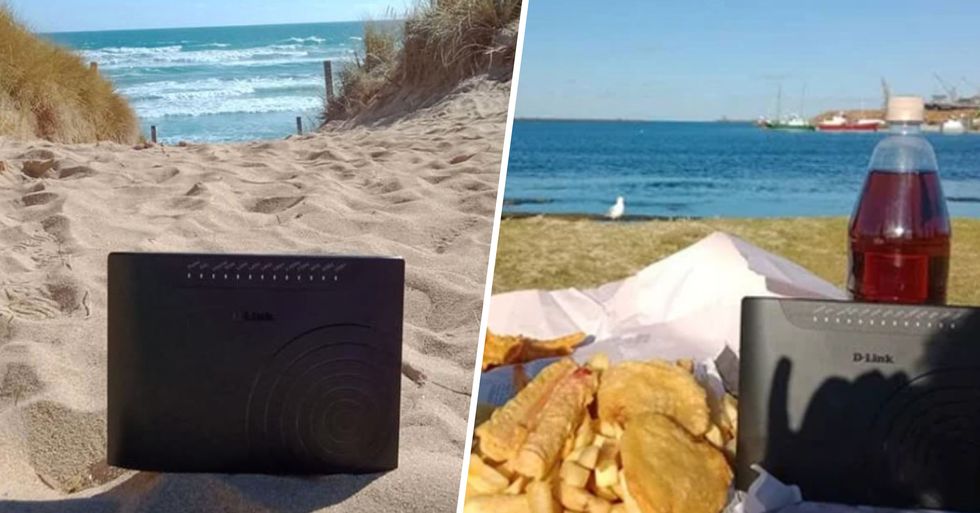 Sometimes, kids are just so ungrateful. You want to take a trip with them to spend some quality time, and they'd rather stay home or see their pals. But one set of parents came up with an ingenious solution - and took a different family member on their trip instead...

Cassie Langan, a mom from Australia, has gone viral this week.

"We asked our kids if they would like to go on a day trip to Warrnambool today," she explained on Facebook.

"We were met with the response ‘that’s so boring, I don’t want to go.'"

"Chris and I decided that instead of taking 3 unappreciative kids out, we let the ones who didn’t want to go stay home."

"We took our most overworked family member for a well deserved day out ... our modem."

"Modem had a fantastic day not being used by the kids and it was lovely not to listen to constant bickering." And the pictures are absolutely hilarious.

Stopping for a snack.

He's also not a fussy eater!

Stop off at the beach.

Modem loves to feel the sun on his ... casing.

Modem never moans about being bored.

Modem is always a good sport.

Fun at the playground.

You don't have to remind Modem to put on his sunscreen.

You don't have to keep an eye on him in case he wanders off!

Modem is excellent at sharing.

He also loves the simpler things in life.

He's also fearless when it comes to things like heights.

Modem never complains about having his picture taken.

He's the perfect companion with which to share a special moment.

There's nothing like quality time spent with loved ones, after all! Want more parent content? Scroll on for the real differences between moms and dads.