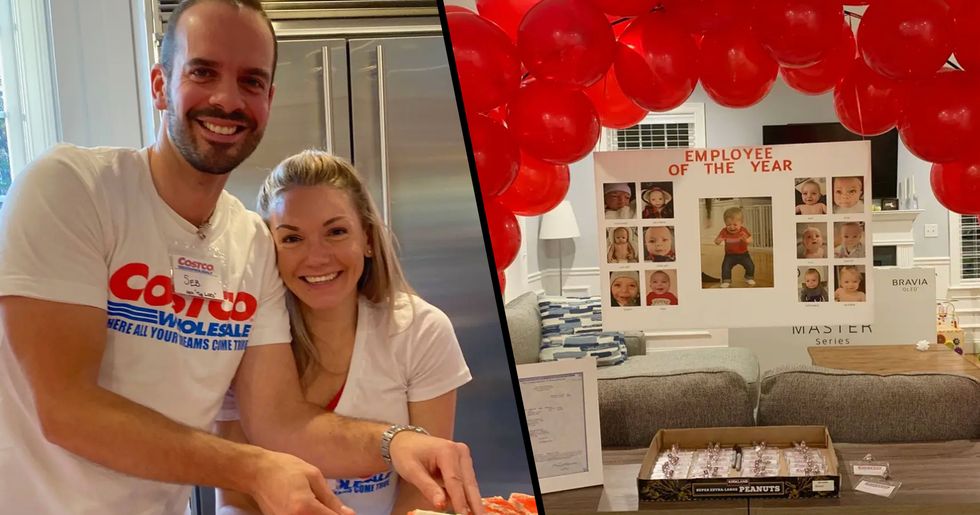 Nothing quite says "happy first birthday" like a trip to the popular wholesaler, Costco...

Well, I guess that depends on who you are.

Avid Costco fans, Josie and Sebastian Gonzalez decided to bring Costco to them in celebration of their child's birthday.

Baby Mason was turning 1, and his parents wanted to do something a bit special. For people that love perusing the aisles of Costco as much of these guys, they couldn't have thought of a more special theme.

I did warn you that these guys are fans of Costco... I mean they've even got Costco t-shirts and they don't work there.

Where did they get the t-shirts from then? I hear you ask...

Well, you can buy them on Amazon apparently. I guess there is actually a demand for Costco tees.

Mason's mom and dad even made Costco name-tags for their guests.

I think anyone attending this party would be impressed with the levels Josie and Sebastian went to in order to execute their unusually themed party.

The Gonzalez's cleverly laid out the party-snack on red trays, just like the ones free samples are distributed from in the real Costco stores.

Josie is a self-confessed fan of Kirkland's alcohol line.

The mom-of-1 decided to incorporate the empty Kirkland bottles into the decorations, using them as vases.

There's no denying Costco is the place to go for party food.

The wholesaler is the king of party supplies and everyone thinks of Costco when they're planning a big party.

Are Costco parties a thing?

There's one thing that makes a Costco party...

Weirdly the Gonzalez's didn't get a Costco cake.

Shocked Reddit readers noticed this and called Josie out right away...

It's the one thing they left out...

Apparently Josie wanted to make Mason's first birthday cake from scratch. I mean no offense or anything but everyone knows Costco cake is the unbeatable champion in the birthday party cake game...Rookie mistake, Josie.

Are we in Costco?

There isn't a pet section in my local Costco wholesalers but there was one in Sebastian and Josie's Costco themed party.

How much do these guys love Costco?

As Josie explained in the Reddit thread, Costco really does mean a great deal to her husband Sebastian.

That guy sure likes a well-stocked wholesaler.

What's not to love? Anything can be magical if you want it to be.

Maybe little Mason will get a job in Costco one day.

Can you imagine how proud his parents would be?

"We've been dreaming of this day since your first birthday..."

"You've made me and your father so proud, I just can't believe it."

Now you might think these guys are pretty kooky...

But eh, they like what they like, and I think that's pretty cool. Continue scrolling to read about the couple who got their wedding photos taken inside a Costco. It seems it's not just the Gonzalez family that hold Costco in special regard...