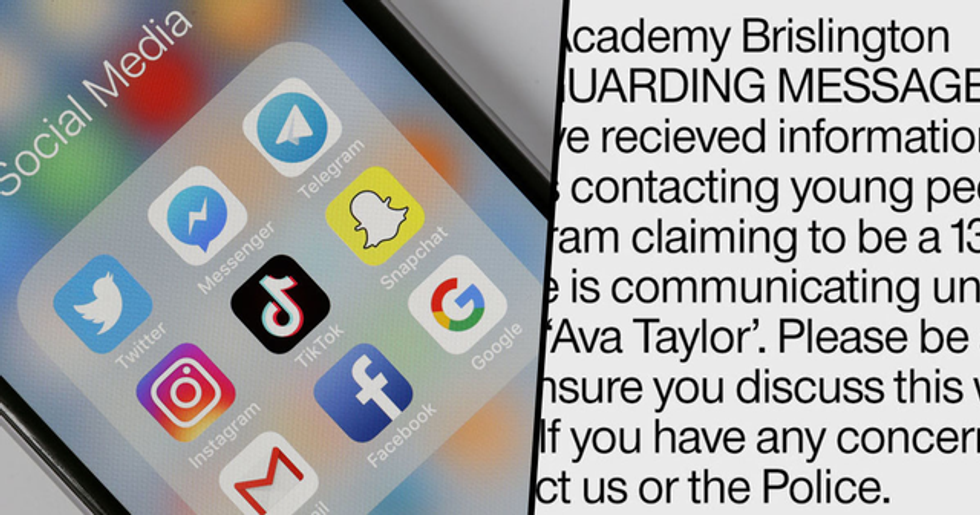 The internet can be a great place - it's a fantastic way to find information, stay in touch with friends, and, most importantly, keep a track of your children.

However, there are darker corners of the internet that we all hope our children will never stumble across. And, sadly, people who use the internet as a means of grooming children under false names and identities are becoming more and more common every day.

And now, there has been a fresh warning issued to parents about a suspicious Instagram account that has been doing the rounds with school children in Bristol, U.K. A man is said to be posing as Ava, a thirteen-year-old girl, and sending friend requests to a number of youngsters.

Keep scrolling to hear more details on the fake account, which has been found to have some seriously disturbing content...

The internet can be a scary place.

Despite all of its wonderful benefits and charms, the internet can be a dangerous place for young and vulnerable children to hang out.

Pedophiles and predators have been known to target children online.

And they use a tactic known as "grooming."

But what exactly is grooming?

Grooming is when someone builds a relationship, trust, and emotional connection with a child or young person so that they can manipulate, exploit, and abuse them. This is often done under a false name and/or identity.

Grooming can be done in person...

But it tends to be done more often over the internet, simply because it's easier. Children are often left unattended when browsing the web and, ultimately, are more exposed and vulnerable than they would be in the street.

And the rise of social media has only made children more vulnerable to these types of predators.

And children as young as 5-years-old are being groomed on social media platforms.

Though, right now, I am simply perplexed at what kind of parent would allow their 5-year-old unsupervised access to their own social media account... Really, guys?

A recent study has highlighted the dangers of these social media platforms.

More than 5,100 online grooming crimes were recorded by police in just eighteen months after a new offense of sexual communication with a child came into force, figures by the NSPCC showed.

And a staggering seventy percent of these crimes were carried out using social media apps.

Instagram was the worst offender, with thirty-three percent of these crimes being committed over the photography platform. Facebook and Snapchat were close runners up.

The NSPCC have slammed these social media platforms for their lack of safeguards against online predators.

The charity’s chief executive, Peter Wanless, also accused social media firms of “10 years of failed self-regulation." “These figures are overwhelming evidence that keeping children safe cannot be left to social networks," he said. “It is hugely concerning to see the sharp spike in grooming offenses on Instagram, and it is vital that the platform designs basic protection more carefully into the service it offers young people."

Instagram clearly has a lot of work to do.

Because, now, a school in the U.K has issued its own warning about a fake Instagram account targetting young children in the area.

A number of the school's students have been contacted by an online predator disguised as a young girl.

A warning was first sent out to students at Oasis Academy Brislington, in Bristol, the U.K. as a number of students were approached by the suspicious account.

And this "Ava Taylor" has a number of young students following "her," sparking fear across teachers and parents in the community.

However, it is believed that "Ava Taylor" is actually a fully grown man, not a child.

And it is understood that the man's Instagram page is filled with "horrible pictures and videos," the Bristol Post reported.

The school sent out a safeguarding message.

Sent to all parents at the school, the message read: "Oasis Academy Brislington SAFEGUARDING MESSAGE. We have received information that a male is contacting young people on Instagram claiming to be a thirteen-year-old girl. He is communicating under the name 'Ava Taylor'."

The message urged parents to warn their children about the account.

And encouraged those who have been contacted to get in touch with the police. "Please be aware and ensure you discuss this with your child. If you have any concerns please contact us or the Police."

The school has since spoken out about the issue.

A spokesman for Oasis Community Learning told Bristol Live: “Our highest priority is the safety and wellbeing of our students and staff. If one of our academies is made aware of any safeguarding risks they follow strict protocols to make the situation safe."

The school has taken all the necessary precautions to ensure that no child is harmed from this account.

“As per our procedures, Oasis Academy Brislington sent out a communication to parents at the end of last week to be vigilant with regards to their child’s social media activities following reports that a local young person had received inappropriate messages from an unknown source," the school's spokesperson continued.

The school is now implementing lessons for the children on how to stay safe online.

These lessons will educate children of all ages on the dangers of speaking to strangers over the internet. “As at all of our academies, Oasis Academy Brislington has a continuous schedule of age-appropriate lessons and assemblies for all of our students on how to stay safe, including staying safe online."

And they are assisting police with the issue.

The school is currently cooperating with the local police force to help to catch the predator behind the account. “We work closely with our partners at Avon and Somerset police on all safeguarding issues."

The man behind the account could face a long time in jail...

However, this is quite a mild sentence compared to how other countries treat convicted pedophiles. Keep scrolling to read about the brutal punishment that the Ukraine dishes out to their criminals... though, be warned, it isn't for the faint of heart.