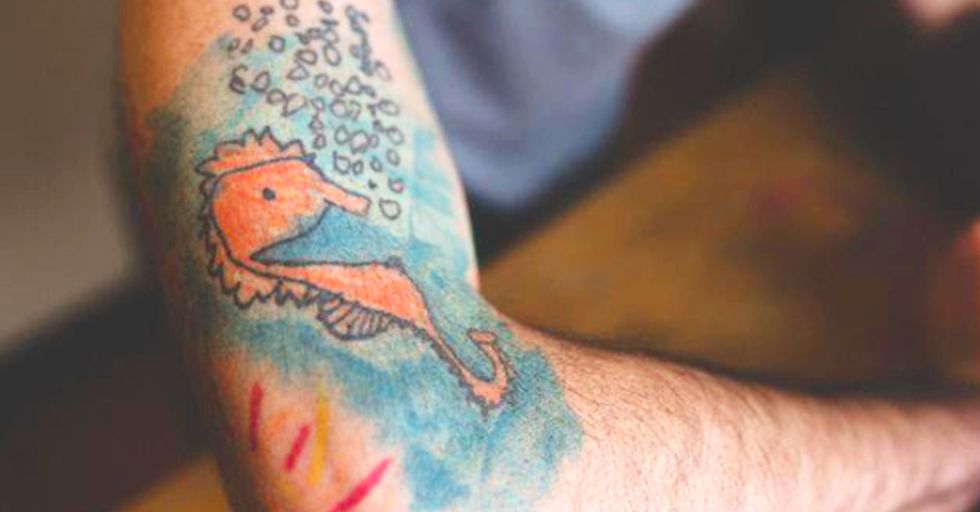 19 Parents Who Got Their Child's Scribbles Tattooed on Their Bodies

It's becoming a trend for parents to get their little kids' drawings and/or signatures tattooed on their bodies.

Often these drawings are really rudimentary (a.k.a. not great).

Is this cute? Is it something you would do? Or do you think this is totally weird? I happen to think it's adorable. Here are 19 examples that might help you make up your mind.

I think that's what it is, anyway. Anyway, this is a pretty badass tattoo even if it wasn't drawn by a little kid. But it was so it's extra cool.

I wonder if that's a portrait of the kid or the mom. Or maybe it just sprang from the little one's imagination!

He's hanging out under a leaf. That is one proud artist right there.

Let's just hope his hands don't actually look like that. That would make life hard. The next one is super cute...or creepy...help me decide...

I like the hearts for eyes, but I'm also terrified of them. Does that make sense? She also has really long feet, which is unnerving.

This dad has a tattooed drawing for each of his two kids. Let's hope he doesn't have too many more kids, otherwise his whole body's going to be covered.

This dad also got a drawing from each of his kids. It's Thor, Wolverine, and Groot in case you couldn't tell.

This dad has several tattoos that his son drew over the years. You can see his artistic ability get better and better. It's really cool to see.

This is like the start of a joke. A chicken, a weird skeleton face, and a robot walk into a bar... The next one is huge!

Is that a pretty bald lady walking through a field holding an umbrella? You know what? It doesn't matter what it is. It's beautiful.

This dad got a tattoo of his daughter's name. I hope her name is Kirsten, but it could be Kilsyen.

This mom got all three of her kids' signatures tattooed on her. Seems like Tod didn't get the memo about name size.

This creature from the deep

I don't know if this kid meant to draw the world's most adorable jellyfish, but that's what they did.

"My daughter drew this a couple years ago," this Twitter user wrote. "She called it King Daddy." The next one will make you "Awww."

Yes, I'm referring to both the tattoo and the adorable little girl who clearly did not think her dad would actually go through with getting her drawing tattooed on his arm.

According to the poster, this is supposed to be a cat, but, she wrote, "This is literally an alien." We concur.

This set of cool designs

This guy did it a little differently. He had his kids draw directly onto his skin, then he had those designs tattooed permanently in place!

The colors in this one are marvelous! Share this with a parent in your life who might have the guts to do this!