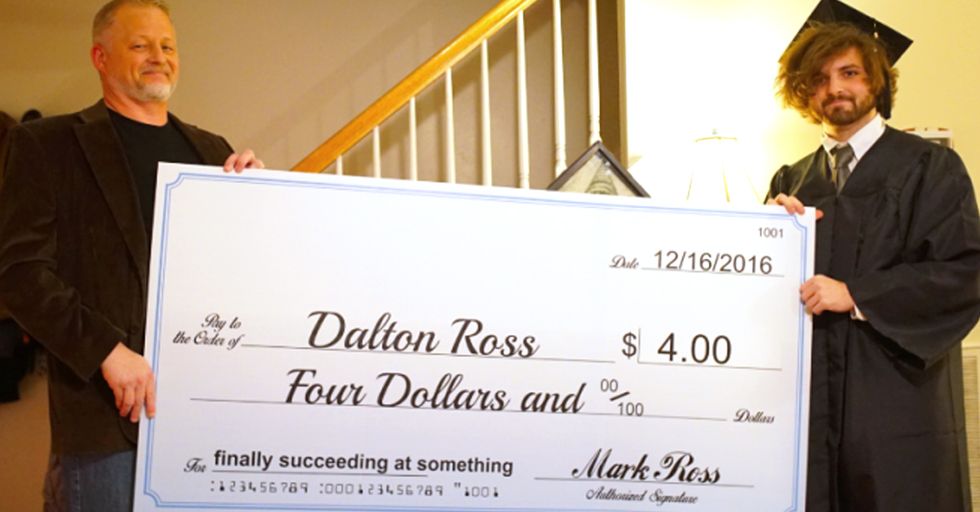 Graduation is a singular time in a person's life...well, hopefully, you graduate multiple times...but you know what I mean.

And it's a time to celebrate.

Graduation often comes with parties and gifts from family and loved ones. And if your loved ones have a sense of humor, it can be a perfect time for some light trolling. Below are 19 friends and family members who've trolled the crap out of their beloved graduate. This is what we in the biz call "good stuff."

Let me just tell you, I love pizza, and I think I'd rather get this pie. Do you know how many pizzas that money will buy?!

This rather large billboard

I would be so embarrassed if my parents bought this billboard. They could have just like...given him that money.

Monopoly money may not be worth any actual cash, but it's also not useful in any other way. The next one will have you stuffing your face...

There's some truth here, sure, but also, that cupcake looks delicious, so I say eat it, throw that little flag in the fire, and celebrate!

Wow, bro, no need to get so sentimental. He really has a way with words.

There was supposed to be cash in there, Aunt Linda. Very funny.

Thanks for taking the time to put in so much effort. It really shows how much you love your graduate.

Is that Comic Sans? Well, that's one way to make a brand new graphic designer cringe. The next one is just a real dose of reality...

The whole truth and nothing but the truth

Wow, Betsy coming in hot with some truth bombs. At least you're the one who got the money.

The cake should have had a cap on top of her head. Not a cat. Nice try, though.

Here's your graduation present, "Andrew," if that's your real name. Grandma has her doubts.

If only we graduated from school and then could automatically do whatever we wanted. That would be the life.

Thanks, Dad. I thought graduation meant no more coding problems, though. The next one isn't quite as complicated...

I mean, yeah, sure, OK, sounds good to me. Graduation means responsibility, but like, not yet.

I don't think this card is trying to be sarcastic, but it is most definitely coming off that way.

Yeah, no thanks. Not today, Uncle John.

...for four dollars. The looks on both their faces say it all. Share this with a recent grad in your life!