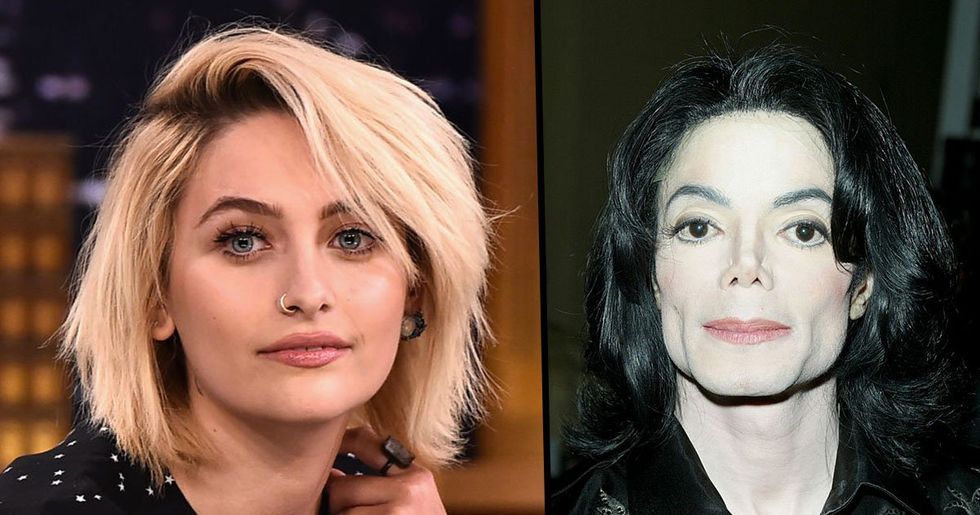 Unless you've successfully managed to avoid the entire internet for the past week, it's likely you'll have witnessed the online storm which is the Leaving Neverland documentary. The HBO show details the abuses of now-disgraced King of Pop, Michael Jackson, focusing on two survivors in particular, Wade Robson and James Safechuck.

The emotional subject matter and unflinching detail makes for some difficult viewing, but the impact of the documentary is clear. In fact, many have called for a boycott on Jackson's music in the wake of the horrific allegations.

The documentary didn't offer too much in the way of defence for Jackson - there were no interviews with anyone on his side of the story. But now Jackson's daughter has broken her silence on the subject. Taking to Twitter to get her voice heard, Paris decried the hysteria surrounding the doc, and offered everyone some (slightly bizarre) advice.

Michael Jackson was one of the most famous men of all time.

He existed in an era of celebrity that just doesn't exist anymore. His musical talents and slightly oddball persona made him more of a godlike figure than an actual human being.

He rose to fame at a particularly young age.

Jackson was a part of child pop band, The Jackson 5. Many have speculated that his youth in the limelight, plus troubled relationship with his father, caused Jackson serious psychological damage.

There's no denying he was a troubled man.

One way this manifested was in his ever-changing appearance. Jackson suffered vitiligo, and wore heavy white makeup to cover his skin tone. He also underwent multiple plastic surgeries, most famously on his nose.

But there was another slightly odd aspect to Jackson's character.

Throughout his career, he had consistently close relationships with a number of young boys. These boys would be alternately chosen as Jackson's 'favorite,' and granted special privileges with him, including sharing his bed while on tour.

These relationships have long been subject to speculation.

And they've recently been brought to the fore, thanks to a certain HBO documentary. Directed by Dan Reed (pictured here at the premiere at the Sundance Film Festival), Leaving Neverland was released last week, and has caused an enormous impact.

The documentary aired on HBO.

It detailed the abuses Jackson inflincted in his career, focusing particularly on the harrowing experiences of two Jackson survivors. The doc made for extremely difficult viewing, but told a hugely important story.

James Safechuck, pictured here aged ten in 1988 with Jackson, had a long "relationship" with the star which lasted through his childhood and adolescence. In a particularly horrific part of the documentary, Safechuck shares memories of a fake wedding ceremony he and Jackson shared.

Wade Robson was the other accuser.

He'd actually spoken out before on his past abuse by Jackson, on the Today Show in 2013. Robson had similar experiences with Jackson to Safechuck, and eventually had his family uprooted from Perth, Australia to Los Angeles in order to be closer to the star.

This wasn't the first time the public have heard allegations against Jackson.

In fact, Jackson has managed to avoid two convictions in the past - once, paying off the victim's family, and another time found not-guilty by a jury. Many fans of the star believe the allegations are a calculated plan to tear him down.

After the documentary aired, Oprah hosted an emotional interview.

Both Robson and Safechuck were interviewed, alongside director Dan Reed. The audience was primarily made up of survivors of child sexual abuse. It makes for powerful viewing.

In the wake of the documentary, some defenders have come forward.

Many of Jackson's most intense and dedicated fans have decided the allegations against their hero must be false, and have started a campaign to defend him. Here are some protesters outside the Sundance premiere. The only way many can maintain their connection to Jackson's music is by dismissing the survivors of his horrific abuses of power, which is something that is difficult to deal with.

Some of those closest to Jackson have spoken out in support.

Corey Feldman, a child star who had a close relationship with Jackson, has vehemently denied anything untoward in the pair's friendship, claiming the sexual aspects of the documentary are entirely fictional.

Nonetheless, it seems the majority believe the allegations.

The impacts have been clear. Many institutions are seeking to professionally distance themselves from Jackson, including The Simpsons, who have pulled their episode featuring the musician.

It was thought keeping the episode in the run was too problematic and potentially damaging to the survivors.

Speaking to NME, produces James L Brooks said, "“It feels clearly the only choice to make. The documentary gave evidence of monstrous behviour. I’m against book burning of any kind. But this is our book, and we’re allowed to take out a chapter."

Many radio stations are seeking to distance themselves from Jackson, too.

It's reported that many stations and music television channels are seeking to pull Jackson's music from their playlists, in order to stand behind the survivors and publicly condemn Jackson.

There are reports of a counter-documentary in production.

Jackson's nephew, Taj, has decried Leaving Neverland as overly biased, and wants to tell the whole story in a new movie.

Public opinion seems to be on the side of the accusers.

Model and activist Munroe Bergdorf has publicly defended the documentary and both Robson and Safechuck. She claims it's our duty to believe survivors of sexual abuse.

#LeavingNeverland is one of the most horrifying documentaries I’ve ever seen. It leaves absolutely no question that… https://t.co/2DFKXW0IEk
— Abby Martin (@Abby Martin)1552186510.0

She followed her Tweet with an Oprah quote on the topic of abuse by people in power, writing, “Celebrity supersedes criminality. How can you see clearly when you’re looking into the sun? How can an icon be a con?"

In spite of this, the movement in Jackson's defence is also gaining momentum.

The #MJInnocent movement claims the allegations have been totally fabricated in order to destroy the star's legacy. They point to body language cues, lack of proof and professional greed in order to attempt to denigrate the accusations.

Those closest to Jackson have largely remained silent on the subject, until now.

One of Jackson's kids, Paris, has taken to Twitter to air her thoughts on both the documentary, and on what it means for her father's legacy.

His eldest, Michael Junior, was born 1997, and his second, Paris Michael, was born in 1998. Their mother was Debbie Rowe - who claimed she never actually had intercourse with Jackson.

His third child, Prince Michael Jackson II, was born in 2002.

The baby was nicknamed "Blanket," and Jackson caused huge controversy for dangling the child over the edge of a balcony in Berlin. Jackson later apologized for the incident.

Following the huge impact of Leaving Neverland, Paris took to social media to get her voice heard on the matter. She claims there's no way these allegations will destroy Jackson's legacy, and urges fans to "relax."

Paris claims the allegations are part of a media scandal.

The shocking and horrifying nature of the allegations against Jackson are thought by Paris to be a large part of the reason they've gained so much attention - but the hype is unimportant to her.

Paris thinks the best course of action is to ignore the story.

According to her, provoking a huge reaction is exactly what the media wants. In order to protect her father, she thinks the best thing to do is keep quiet and wait for things to blow over. Although, based on the seriousness of the allegations, we're not sure that's going to happen.

She finished with this (slightly odd) message.

It appears Paris was trying to find some humor in the situation - although given the emotions involved, this may have been a misguided move.

There's no denying this story must be horrific for Jackson's kids.

Not only do they have to hear the allegations, but they have to know that the entire world is talking about them, too. We can't imagine how they must be feeling.

In this context, Paris's pleas for calm seem a little more understandable.

Being at the center of a media storm doesn't sound like much fun - particularly when the reason behind it is something so dark and horrifying.

Nonetheless, standing with survivors is really the only course of action.

The fact the Robson and Safechuck have shared their stories is hugely commendable and brave, and we hope this aspect and the courage two isn't lost in this story.