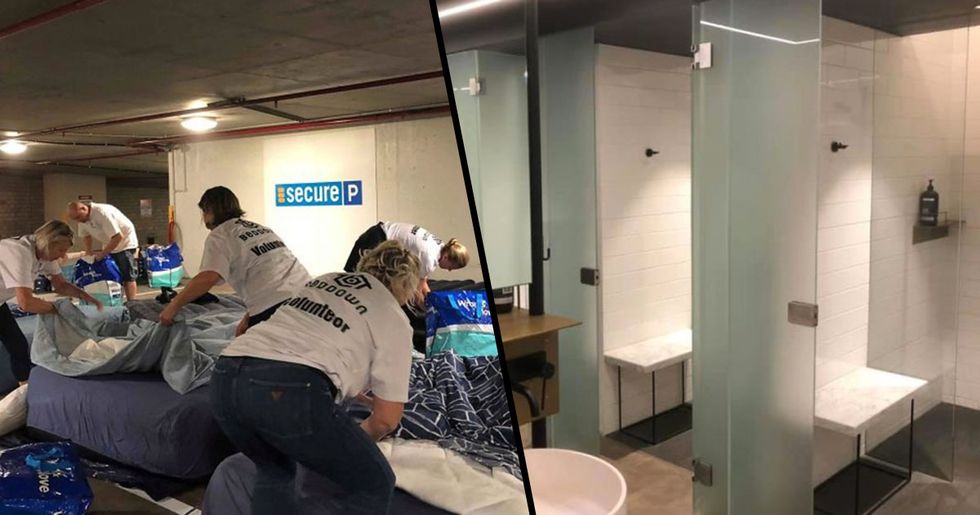 Australia has seen a rise in homelessness in recent years.

Having somewhere to sleep can really make a difference when someone is trying to get back on their feet.

The charity sought out the initiative of using abandoned spaces to provide shelter, beds and shower facilities for homeless people in Brisbane.

Beddown has taken over a parking lot and turned it into a wonderful shelter for the homeless.

Scroll down for the pictures.

Australia is facing a homelessness crisis.

The rise in the homeless on the streets across Australia has become a real cause for concern.

People pitching up tents in the business district of Sydney caused a lot of controversy in 2017.

Martin Place situated in the central business district of Sydney became known as "Tent City" because of the number of homeless people camping there.

A controversial law was passed to evict the homeless.

The NSW Government in Australia caused public outcry when they passed a bill that gave police the power to remove people from crown land if the land minister deems it to be a public safety issue.

Around fifty homeless people were evicted from the site at Martin Place but as is the situation across Australia, many people have nowhere to go.

It's true that homelessness can affect anyone. Take Joel Birch, the musician who found success in the Australian metalcore band, The Amity Affliction. Birch has opened up about how depression left him homeless in Australia, in his early twenties.

Mental illness is one of the leading causes of homelessness.

In a 2011 report published by the Australian Institute of Health and Welfare, it was revealed that "the prevalence of mental illness in the homeless population to be between 72% and 82%."

What support is out there?

Organizations like The Big Issue have been major players across the world in helping people when they find themselves homeless but so much more needs to be done.

Parking lots tend to be vacant at night.

The charity struck up a deal with one of the largest car parking operatives in Australia, Secure Parking, to do a two-week trial of the scheme in Brisbane.

"Thank you to our awesome group of volunteers."

In an Instagram post, the charity commended its volunteers for helping set up beds each night for the trail.

"Sleep deprivation is a massive issue for our homeless"

The founder of Beddown, Norman McGillivray, believes getting a good night's sleep is vital for anyone trying to get back on their feet.

The response to the scheme is so inspiring.

One rough sleeper who slept in the make-shift shelter during the trial said, “Being able to sleep all night and away from drugs, I’m clearer in the day and have not used drugs for 8 days."

A chance to clean up.

The scheme offered homeless people some of the necessities we take for granted every day. Another sleeper praised the scheme, saying “after spending the week here, having a good sleep at night and a routine, it reminded me of life and I booked myself into Rehab for 6 months."

A sense of security.

The parking lot provided the homeless sleepers a chance to sleep without fear. One guest appreciated the opportunity to have a stress free night. They said: “I don’t have to watch my back here."

“It’s the first time I have had a dream in years."

It's amazing what a difference putting a couple of mattresses down in a parking lot can make to those in need.

Hopefully, this will inspire similar projects.

The trial provided beds for forty-one guests. Due to overcapacity, 9 people had to be turned away.

100% of the guests said they felt safe during their stay.

Security can really help improve someone's mental health. A place for the homeless to sleep where they can feel safe and secure can really save lives.

Norman and his team of volunteers have big plans.

After the success of the trial in Brisbane, the team at Beddown is hoping to find more vacant spaces to provide temporary sleeping solutions for the homeless.

Not only does the charity provide beds and shower facilities, but they also help their guests get the help they need. Whether that be directing them to doctors, social services, dentists, etc. that can continue to help them get back on track. Continue scrolling to read about the viral singing homeless woman who was offered a major recording contract...