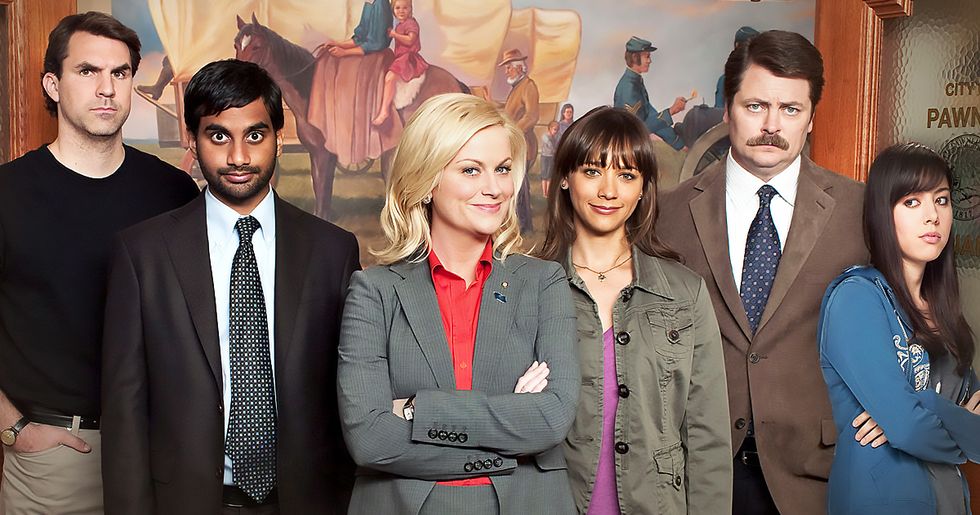 For seven seasons, the NBC sitcom Parks and Recreation gave us a glimpse into the Parks Department of Pawnee, Indiana staffed by the eternally optimistic Leslie Knope, the breakfast food-loving Ron Swanson, and a bunch of other hilarious public servants. Parks and Rec was a beacon of hope, suggesting that even the most callous and inept among us still have their hearts in the right place.

And if our current political moment has shown us anything, it's that Parks and Rec was one hundred percent correct!

But that wildly sunny worldview permeated the show, making it one of the most reliably wholesome shows in the history of television. Every single character on that show loved everyone else, and they constantly went out of their way to show it. And so, the next time you're feeling overwhelmed by the cruelty and cynicism in the real world, think back on these moments when Parks and Rec was the most wholesome show on TV.

At the beginning of the show, Tom Haverford was slimy and obsessed with status.

When we were first introduced to Aziz Ansari's Tom Haverford, he was off-putting, the kind of creepy social-climber who you could tell had nothing going on beneath the surface.

But his friends still came out for him.

In one of the first moments that saw Parks and Rec put its flag in the ground and shared how nice the characters were going to be was when Tom held a big event at a club. He sold Snake Juice and all his pals from the Parks Department showed up to support him (and get just obliterated on Snake Juice).

And at the end of the day, he made himself a success.

In the series finale, we find Tom having successfully parlayed his many, many business failures into a successful self-help career... mostly on how to deal with failures. We couldn't help but be touched by the little weirdo's hard work. No one failed better than Tom Haverford.

Leslie and Ann's friendship was pure from the beginning.

When Ann Perkins walked into the Parks Department to demand they fill in the sinkhole behind her house, she didn't know she was also walking into the life of Leslie Knope, her future best friend.

They were always there for each other.

Leslie and Ann's friendship was textbook supportive — from Ann bringing Leslie waffles to Leslie finally, finally, getting that sinkhole filed in, Leslie and Ann have been there for each other through everything.

But what was really sweet were Leslie's endless nicknames.

Leslie had a bottomless wellspring of nicknames for Ann, saying to her throughout the years. Things like, “Ann, you beautiful tropical fish. You’re smart as a whip and you’re cool under pressure" and “Ann, you poetic, noble land-mermaid."

Leslie and Ben are one of TV's great love stories.

And what's crazy about Parks and Rec is, it might not even be the best love story on the show! That's how great its other love stories are!

Ben showed up at the end of season two as a government number-cruncher.

Initially a representation of the bureaucratic red tape that can so often bring down the kind of grand plans Leslie Knope loves, Ben was portrayed as a villain when he first strolled into Pawnee.

But then they fell in love.

The turn from adversaries to soulmates was slow. At first, they couldn't date because Ben was Leslie's boss. But eventually, they decided to throw caution to the wind and just love each other.

Maybe the most wholesome phrase on the show, "I love you and I like you" came to become Leslie and Ben's couple's mantra. It's important to both love and like the person you're with. And no, they are not the same feeling. I love 7/11 chili dogs, but because of what they do to my life after I eat them, I do not like them.

That's how you know someone loves you — they get invested in the things you're invested in yourself. When Leslie helped Ben fulfill his dream of sitting on Game of Thrones' Iron throne, he was hers forever.

And he was nerdy about a lot of things.

And the show had lots of moments to make us swoon over how much Leslie loved to indulge Ben. He not only tried to open a calzone shop, but he also did the nerdiest thing one can do and created his own overly-complicated board game.

Maybe the show's funniest couple was Andy and April.

And because of that, they get my nod for "Best Couple on Parks and Rec," narrowly snagging the award from Leslie and Ben. Trying having one half of your couple be just a little bit dumber next time, Leslie and Ben.

Their relationship has always been super sweet...

Andy is a big galoot and April is dark, moody, and lazy. They should not fit together, and yet somehow, they do.

Ohh, that's how — their oddities line up. When two people are both kinds of weird, they can actually fit together just right, like two puzzle pieces together in a microwave.

With Andy and April themselves both being a little bit askew, it's no wonder they'd end up with a dog that is literally askew. Champion was a super fun addition to Andy and April's little family.

Guess how he got his name.

Yep, his name is champion because he's the champion of all dogs. Even if you didn't guess exactly where his name came from, I'll bet you at least knew the explanation was going to cute.

And Chris fell in love with Champion too.

When Chris watched when Andy and April went on a quick getaway, he fell for the mutt. In one of the sweetest moments in the show, Chris accepted he'd have to let him go... and Champion licked away his tears.

And Champion wasn't the only cute animal on Parks and Rec.

The town of Pawnee's biggest celebrity was actually very little. Or should I say Lil'l? The tiny horse Lil'l Sebastian was beloved by everyone in town. Or, rather, almost everyone...

Ben did not understand the love.

As a person who came to Pawnee later in life, Ben did not understand the big deal with Lil'l Sebastian. He was ostensibly playing the role of audience surrogate and asking the questions we at home were asking about the tiny horse, but come on. We all got why Lil'l Sebastian rules, right? He's a tiny horse.

But tragedy would strike.

Some would say that the most beautiful thing about life is that it ends, reminding us of how precious it is. But that person never had to deal with the death of such a little horse. Lil'l Sebastian shuffled off this mortal coil in the last episode of Parks and Rec's third season.

And Pawnee would never forget him.

When Pawnee would merge with rival town Eagleton, they held a Unity Concert to bring everyone together. And who showed up, in hologram form, on stage? You're damn right it was Lil'l Sebastian. Now that's a tasteful way to honor a mini-horse.

There was one anomaly in the wholesome-ness, though — Jerry Gergich.

For whatever reason, all the kindness seeping out of the pores of every character on Parks and Rec was never directed at Jerry Gurgich, the hapless Parks employee who, sure, never did anything right, but did not deserve the constant ridicule he got. No one even respected him enough to call him by his real name! Through the years, they called him Jerry and Terry at different times, neither of which is his real name.

But Donna did him a solid.

At her wedding, Donna listed Jerry's name as "Gary" on the card reserving his seat. Thinking it was a hilarious typo, everyone started calling him Gary... which is his real name! Even the most beat-up-upon character on the show got his happy ending.

Even though April never took her job seriously...

Always trying to get out of doing any actual work, April was the poster child for early 2000s apathy.

In one of the show's sweetest moments, Leslie gave April a plaque to congratulate her on doing some good work. But she had it done so fast... because Leslie made it the day April started working for her.

And it was a very sweet moment for a very typically unemotional April.

Ron had a secret.

Ron Swanson, tough guy Libertarian, and avid outdoorsman was secretly a be-bopping' jazz saxophonist who went by the name Duke Silver. He kept that fact hidden from his Parks Department coworkers, though.

But April would find out.

And when she did, she didn't spill the beans — she and Ron had built a connection over the years by both hating their jobs. So she kept it under wraps, and he was deeply appreciative.

And finally, the best friendship on the show was Leslie and Ron's.

Nothing was better than seeing these two complete opposites grow to become best friends over the course of the show. Leslie loved the government and did everything she could to make people's lives better, while Ron just wanted to be left the Hell alone. But these two saw value in each other and were there for each other the entire show. And when she was marrying Ben, Ron even walked Leslie down the aisle. This show, you guys. It was just-- it was too much.