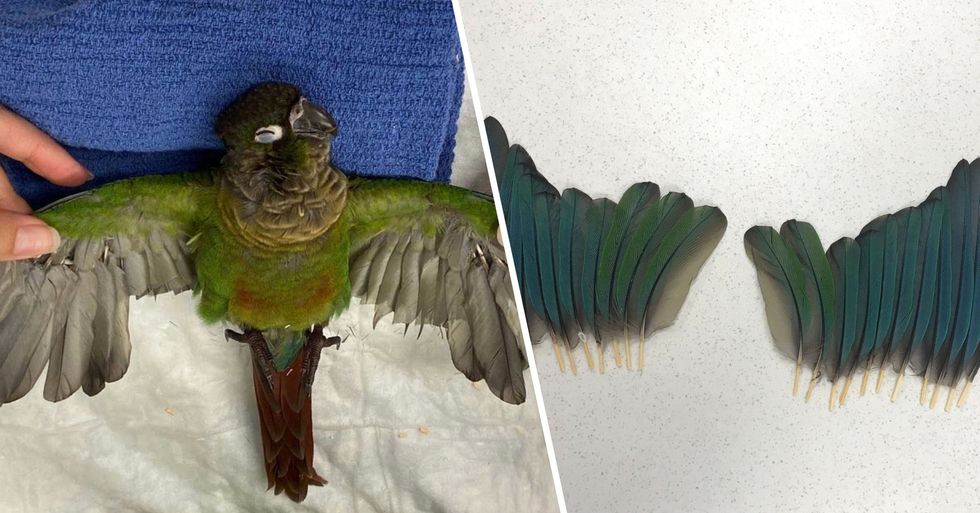 A parrot in Australia was taken into a vet's surgery after her wings were cruelly cut too short, and a heroic vet was able to build her a new pair of wings.

Keep scrolling to find out more about this beautiful story...

And one parrot is a fine example of this...

This is Wei Wei, and she is a twelve-week-old Green Cheeked Conure, a species of exotic bird native to the forests of South America.

She was brought into The Unusual Pet Vets...

This veterinary practice is based in Brisbane, Australia, and as their name suggests, they specialize in unusual and exotic pets.

Wei Wei was brought to the surgery in desperate need of help...

As you can see by the photograph, her back wings had been trimmed down very short.

Sadly, wing trimming is a common procedure amongst bird breeders...

Many are lead to believe that trimming a bird's flight feathers is good for the bird's wellbeing, but this isn't necessarily true. As Wei Wei proved, this can prevent a bird from being able to fly and it can affect their mental wellbeings - thus shortening their life spans.

This is known as a "severe wing trim"...

And after an examination, Catherine decided to create a pair of prosthetic wings for the little bird.

A range of feathers was donated to the vets...

And these feathers were ensured to match the length and plumage of Wei Wei - with them being fully disinfected and washed before-hand, of course!

Wei Wei was placed under a light anesthetic...

"The base of the feather was cut to allow the entry of a wooden toothpick where it is secured in place with glue," Catherine explained.

Each donated feather was applied with the ultimate precision...

And time was given for the glue to dry on each feather.

The finishing results are truly remarkable...

"Wei Wei was then placed in our heated hospital room for a couple of hours before encouraged to fly. She flew very well after a few attempts and appeared quite excited that she could suddenly fly," Catherine went on to say.

Wei Wei is almost as good as new...

"Now that Wei Wei had learned to fly, she can safely land and maneuver herself through the air. She no longer falls to the ground and so does not hurt herself," Catherine said.

Wei Wei is one lucky parrot...

Keep scrolling to learn about the pigeon who can't fly and how he befriended a dog who can't walk...