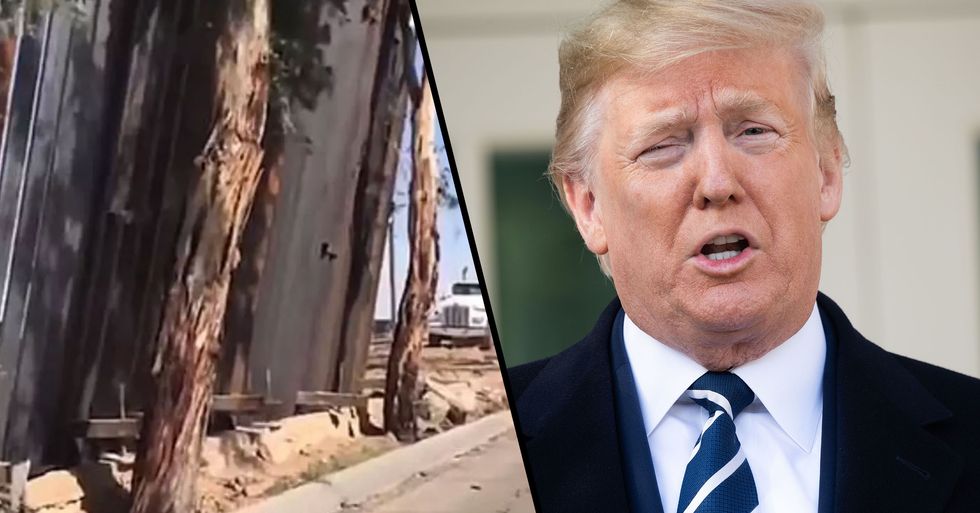 Since his elevation to President of the United States, Donald Trump has arguably only done one thing of significance – ruffling feathers. From his racist remarks to his sexist allegations, the world leader has really stepped on more than a few toes. But at least unemployment rates have lowered.

But because of this, everything he does, says or tweets often becomes the butt of some form of online joke. A major contributor to these pranks being his plans to build a wall across the Mexican border, in the hope of stopping the influx of Mexican immigrants into North America. But it appears that building this "virtually impenetrable" wall is actually much harder than he originally thought.

Keep reading to see the video of sections of the wall being blown over...

Since his electoral campaign, Trump has promised one thing.

Many of us thought it was a joke that he was promising to build a wall across the Mexican border.

The wall has often led to criticism from various parties.

Many political critics have criticised Trump’s wall as being both obscene and ineffective.

For one thing, walls are still easy to overcome.

No matter how tall or robust a wall can be, they can still be overcome through various means.

I mean, we've heard what happened to the Berlin Wall...

If one thing history has taught us, people really don't like walls. East and West Germany were brought together after the demolition of the Berlin Wall.

And on a much simpler note... Mexicans have ladders.

Yes, these handy DIY tools are also very effective for climbing over pesky walls. Or ropes. It’s all you really need if you’re planning on scaling a wall...

And some of these methods have actually been used.

You may laugh at these suggestions, but these methods have actually been utilized in real life. Only last month, border patrol released a video of a group of Mexican immigrants combating a wall with the help of their trusty ladder.

But there is one more wall-defining act we haven’t discussed.

And it’s called, digging a tunnel.

Yes, this is all true.

It appears that not only have Mexican people discovered how ladders work, but they have also become quite keen diggers, allowing them to build various tunnels under various border patrolled areas.

Guess that throws a spanner in the works.

I’m sure Trump is ecstatic to hear that, unlike himself, the Mexican people can actually pick up a shovel and do some hard work.

New ones are constantly being discovered.

The first to be found in the state of Texas, the tunnel was still in construction upon its discovery and is almost sixty-feet long!

It has shocked the local people.

Texas businessman, Orthal Brand Jr, had this to say: “You’ve seen them on the news in Arizona and New Mexico and stuff like that, but I’ve never seen one in the Valley."

And the tunnel isn’t going anywhere (for now).

Brand also said that the possibility of destroying the tunnel is difficult, because of its construction and placement.

Because the tunnel is built into a river embankment.

Speaking about the process, Brand had this to say: “It’s hard for me to put a piece of equipment on the edge of a 30-foot sand cliff, and reach down and try to collapse something, without putting my own piece of equipment and my operator at risk."

They may even have to take extreme measures.

Brand also stated that there could be the possibility of having to use dynamite to destroy the entry way into America.

That's not the only problem we have on our hands now.

Because of high winds, sections of the wall have fallen over, leaning more towards Mexican land. According to CNN, this occurred during the supposed improvements being made to the strength of the old barriers in place at the border.

Pitones told the news outlet this:

"We are grateful there was no property damage or injuries." The winds were believed to have reached around thirty-seven miles per hour.

This is only one of the many problems with the wall.

Back in September, Donald Trump addressed the issue saying: "I wanted them to show you the interior of parts of the wall and what's inside of each individual slat. And you'll see it's a combination of steel, concrete, and - as one of the folks just said. It really is virtually impenetrable. Any walls that were put up would get knocked down very quickly, very easily. This wall is not something that can be really knocked down." Yikes.

This fact has only led to more criticism of Trump’s wall.

The resources needed to destroy tunnels, re-build already built sections and hire Brand are not cheap and this has led to further criticism of Trump and his proposed wall.

Critics are furious that no one addressing the elephant in the room.

The wall alone would cost billions of taxpayer dollars a year, and that is only concerning the wall and its maintenance.

And then there’s the tunnels... the wind... and ladders.

Inevitably, Trump’s wall will also find itself sitting on top of freshly-made tunnels, and other new methods of getting through it, which again would take an exuberate amount of money to both locate and destroy. Let's face it, we can put all that money back into the system and focus on other important factors like healthcare and infrastructure.