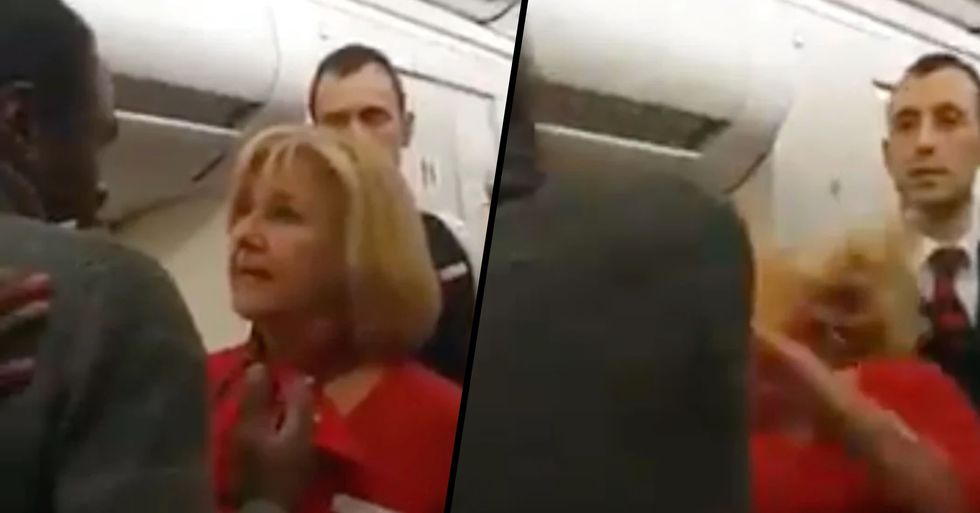 It's safe to say that as we head further into the coronavirus outbreak, tension and panic only seems to be on the rise.

This week, a viral video taken on a flight has proven just that. Keep scrolling to watch the heated clip...

Coronavirus has been hitting the headlines non-stop lately.

The number of worldwide cases has now surpassed the 200,000 mark.

Since the first COVID-19 patient in Washington, there have been over 4,000 more confirmed cases across the country, with the death toll having now surpassed one-hundred.

It's safe to say that both panic and tension has been rising.

And a video that has gone viral on social media this week proves this.

The clip shows a passenger getting into a dispute with the cabin crew...

Which was allegedly triggered over rows about elbow room.

And at one point, the passenger slaps a female air hostess in the face.

The scene was captured by the man's wife.

In the footage, she can be heard claiming that a male flight attendant had punched her spouse first.

2 other flight attendants then approach the man to try and calm him down.

The man was initially wearing a face mask.

But he pulled it down during the heated spat and allegedly "sprayed spit at some of the people he was yelling at," according to VT.

A female cabin crew supervisor then appears to chime in.

She can be heard telling the passenger: "Now you listen, and you calm down. You will go with [the] police ... Listen, we heard you already, now you're finished. If you don't finish, you will get in trouble."

She then appears to take a strike at the man...

Who then responds by slapping her in the face. The video then cuts off.

According to the Daily Mail, the incident is thought to have taken place on a Brussels Airline flight on Friday.

The chaotic footage was posted to Facebook and quickly went viral. "This happened on a Brussels airline flight this morning. A black man, his wife and family were traveling back from a vacation. The man is complaining about TWO men who were sitting on the sides of his Mother-in-law and elbowing her as she was sitting in the middle seat," wrote Carmen Moore, who posted the clip.

"The man complained to the supervisor and was told they didn’t have to help him. The female Supervisor proceeded to defend the men who were elbowing the woman when the man said something to the supervisor. She slapped him. The men who jumped on him broke his ribs and the police drug him down the plane's steel stairs despite the man asking for medical attention prior."

Interested in more coronavirus related news? Keep scrolling to check out the full list of all the celebrities who have tested positive or are currently self-isolating...