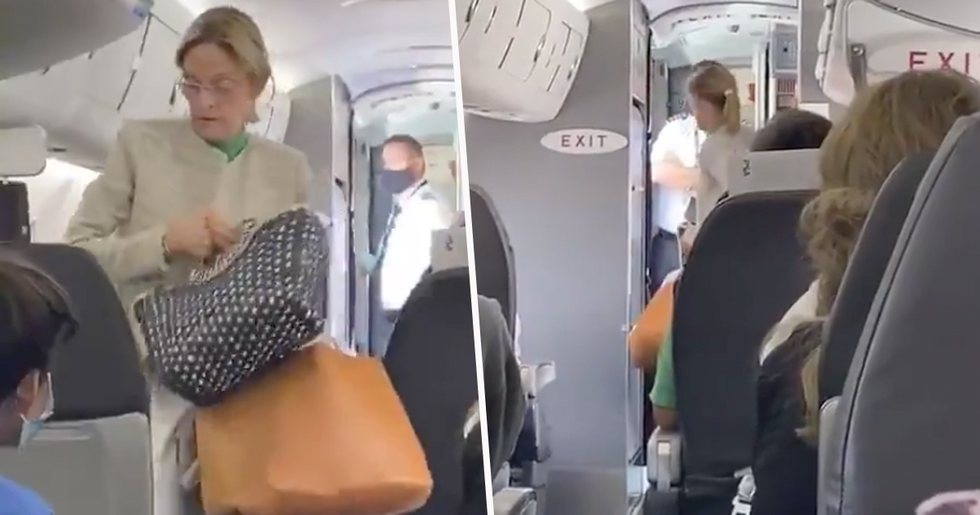 Another so-called "Karen" has gone viral this week after getting kicked off an airplane for refusing to wear a mask.

Another "Karen" has been catapulted into the internet's spotlight.

This time, the incident took place on an airplane, and, after viewing the clip, people are less than impressed.

Let's start with the basics.

What exactly is a Karen? Well, Urban Dictionary describes a Karen as a "mother of three. Blonde. Owns a Volvo. Annoying as hell. Wears acrylics 24/7. Currently at your workplace speaking to your manager."

"Karens" are usually known for demanding the presence of a manager in order to complain...

And they have become a painfully hilarious joke over the last few years.

The name "Karen" has always been associated with a certain type of middle-aged white woman who’s likely to throw a fit if she doesn’t get her own way.

But we aren't complaining!

We can now spot a Karen asking for the manager a mile off.

There are a whole range of Karens out there...

As we become more aware of the ongoing racism occurring in this country, we can't help but notice that these Karen's are often at the center of the scandal.

Just last month, a "Karen" was publically ridiculed after she was filmed calling the cops on a black man.

A man was recently filmed calling the cops (shock) on a pair of peaceful protestors...

And, just when you thought we couldn't write about any more Karens...

You guessed it, another video has emerged.

This particular incident took place on an airplane...

The eye-opening clip was filmed by passenger Jordan Slad on an American Airlines flight from Ohio to North Carolina, and uploaded to TikTok.

During the video, a woman can be seen refusing to wear a mask on the plane.

This goes against flight guidelines that state everyone must wear a mask to fly.

This woman claimed she didn't have to wear a mask for medical reasons.

According to Jordan, the woman was being "argumentative from the gate."

And began demanding to be boarded first, "causing an obvious scene."

At one point while on the plane, another passenger confronted the woman about not wearing a mask.

"A woman in the back got up from her seat and sort of confronted the attendant saying she was going to miss her connection and then directed the conversation back to the woman saying if she misses her flight because of her," Jordan says.

As the incident ensued, the woman was removed from the flight.

The woman is clearly furious, and grabs her items before storming off the flight.

As she leaves the aircraft, everyone can be heard cheering.

One passenger even shouts: "Just leave, we have flights to get on!"

The woman doesn't leave it there, however.

Before making her grand exit, she turns around and shouts "You can clap all you want."

After the clip went viral, people reactions came pouring in.

@BookofJonah @GeorgPuluj @AmericanAir @davenewworld_2 Why the hell would someone pay for a flight and then forfeit… https://t.co/Nifp6b5nch
— Sarah (@Sarah)1595232989.0

Viewers truly couldn't believe how she could think she was in the right.

The airline was well within its rights to ask her to leave...

Ole Karen refused to wear a mask on an @AmericanAir flight so she was KICKED OFF. And then everyone clapped 😂😂😂😂… https://t.co/xewEJFGGDk
— BookofJonah (@BookofJonah)1595204385.0

And if you fancy reading another anti-masker Karen story, scroll on...