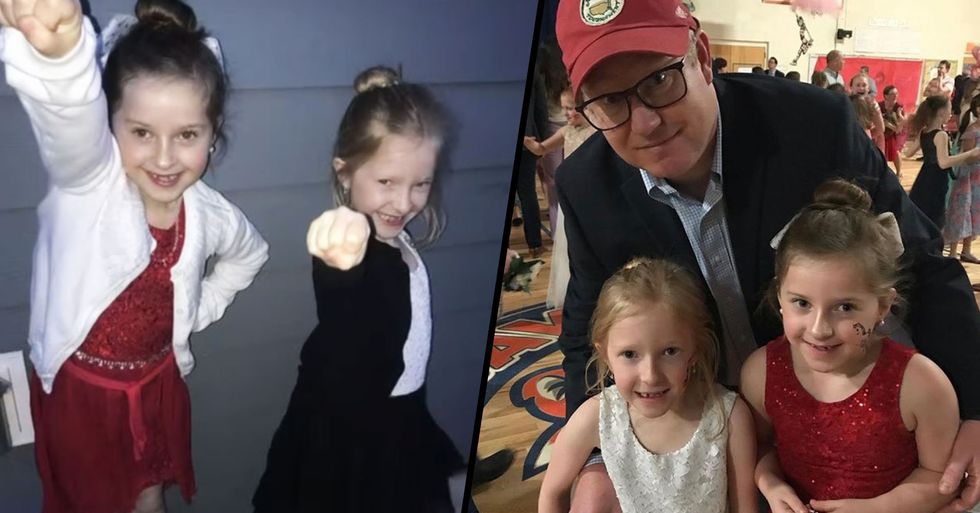 Dads never get the praise they deserve, yes they can be a little rough around the edges and don't always remember to brush the kids' teeth when moms not around.

But most of the time they're just trying their best, and who can blame them, moms are pretty hard to compete with.

Keep scrolling to see what one dad did to get to his father-daughter dance on time...

A plane was running late, but that wasn't stopping one dad...

He was on his way to a very important father-daughter dance.

Mike Good, was flying from Nashville to Charlotte.

He was going to attend a father-daughter dance with his twin daughters on a Thursday afternoon.

The flight was delayed due to bad weather.

Not only was that going to make him late for the dance, but he was also sat right at the back of the plane.

This meant he was going to be one of the last ones to get off.

This isn't good news for a dad with daughters counting on him to be there for something so important.

Luckily Mike had sparked a conversation...

He mentioned to one of the flight attendants why he was flying, and that he was on his way to see his daughters.

He mentioned he might not be able to make the dance.

The flight attendant decided to help him out.

That's when the flight attendant made an announcement, telling the passengers about his situation.

She kindly asked everyone to remain seated, while he hurried off the plane.

Luckily, people were happy to let Mike get off first, with some of them even clapping him off the plane.

He rushed down the aisle to make it in time for the dance.

As he was running down the aisle, he thanked everyone for their kindness and wished them a happy Valentine's Day.

The writer, Jenny Hale, who was on the same flight, posted about the flight.

It didn't take long for the story to go viral on Twitter.

He posted a picture of him at the dance with his 2 daughters.

Despite being fifty minutes late...

If it weren't for the flight attendant, he might never have made it.

Mike was even interviewed about his ordeal...

He said: “It was a really amazing and special moment, all my thanks are to the flight attendant and everyone on board that was supportive. With all the negative stuff surrounding flights these days, it was just really cool to be part of something like this. Something I won’t forget."

"Sweetheart dance with my beauties. Dad's flight was delayed so mom had to fill in but he showed up and they were excited to see him!" Mike's wife posted.

There were lots of responses...

People even respond with their own feel-good flight stories. The internet needs more of this. Keep scrolling to see why one girl dressed up as her dad... Get the tissues at the ready!