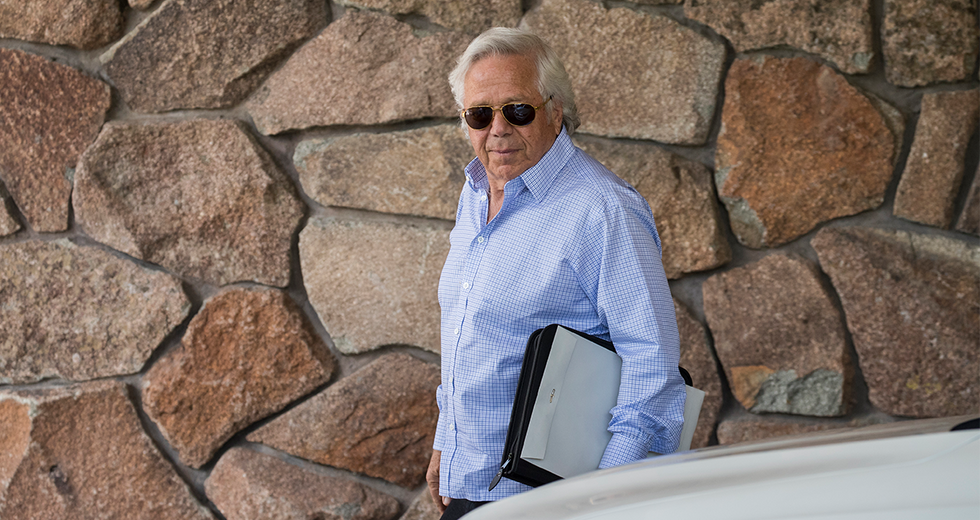 Well, it's been an up and down month for Patriots owner and notorious mac-n-cheese lover, Robert Kraft. For those of you who avoid the Super Bowl like it's an unvaccinated child, earlier this month the Patriots took home their 6th ring, tying the Pittsburgh Steelers for the most Super Bowl wins in NFL history.

So that's the good news for Kraft. But the life of a successful white male billionaire can't just all be positives, right? Okay, maybe that sarcasm had a little too much bite to it. So sarcasm aside, Kraft was hit with some pretty bad news this morning.

So how did it all go down?

It doesn't seem like Kraft was involved in trafficking.

Let's get that out of the way off the top. Police have charged him with two counts of soliciting "sex acts" from Orchids of Asia Day Spa in Jupiter, FL.

Here's a photo of the outside.

Police have also posted this notice on the front of the spa.

It reads: "Danger. This unit is unsafe and its use or occupancy is prohibited". Which seems a little blown out of proportion, but you do you Jupiter PD.

Police say they have video evidence.

Reportedly, Jupiter police have a video of Kraft entering the spa on at least two occasions. And according to CBS, "the spa was among 10 shut down in Orlando, Palm Beach County and the Treasure Coast after a several-month investigation revealed women there were in 'sexual servitude,' according to arrest records."

Despite the video evidence, Kraft's lawyers put out a statement denying his guilt.

"We categorically deny that Mr. Kraft engaged in any illegal activity. Because it is a judicial matter, we will not be commenting further." Just once I'd love for a lawyer to say, "yeah he did it, and I'm annoyed that I have to represent him."

Police report that Kraft was driven to the spas by a chauffeur.

The average cost per visit for services is $59 or $79 per hour, depending on... what you order.

Or, you know don't, because we've already told you all the interesting bits and that video is super long and boring.

The NFL has issued a brief statement on the matter.

From their website: “The NFL is aware of the ongoing law enforcement matter and will continue to monitor developments."

The charges are only a misdemeanor.

Meaning that Kraft will still have to appear in court, but his sentence might be pretty light.

So what exactly could Kraft be facing, in terms of a sentence?

The charge is punishable with up to 60 days in jail, six months of probation and $500 in fines, according to Florida law.

And what does this mean for the Patriots?

Will Kraft have to sell the franchise? Most likely not.

What it does mean is that Kraft will face fines from the NFL.

According to ESPN, "Everyone in the NFL, including owners, are subject to the league's personal conduct policy. The policy covers 'conduct by anyone in the league that is illegal, violent, dangerous, or irresponsible, puts innocent victims at risk, damages the reputation of others in the game, and undercuts public respect and support for the NFL.'"

...and are "subject to more significant discipline when violations ... occur." So how will Kraft be punished by the NFL?

NFL fines are notoriously inconsistent, but recently Colts owner Jim Irsay was fined half a million dollars for driving while under the influence, so expect a fine around the ballpark, or even more. (Or less, because the Patriots get away with everything.)

Because this isn't the first time the Patriots franchise has come under fire.

Most recently the Patriots were fined and had their Quarterback suspended for four games for deflating footballs to get an edge in games. Apparently Brady liked to throw the ball with a slightly under-inflated (by regulation standards) football.

The Patriots were also fined and charged in 2007.

Coach and Trump supporter (not a judgment, just a fact) was secretly taping other team's coaching signals from areas of the field that was against NFL rules. So suffice to say, the Pats organization is no stranger to doing illegal things, and will probably cope with this new situation by winning another Super Bowl or two. Sadly.

According to NFL reporter Adam Schefter, there could be more people wrapped up in this scandal, although no names have been brought forward at this time.

Since there hasn't been a name, of course, the speculation has run wild.

Some people suspect it might have something to do with Tiger Woods, as he has a house in Jupiter and a history with well, scandal.

Michael Jordan is another name being thrown out there.

Again, due to him owning a house in the area. And, well, being a big name. Other names being thrown out include Stan Kroenke, LA Rams owner, and Dallas Cowboys owner Jerry Jones. Why? Probably just because people would get excited if that were the case. We really have no basis to guess who this other person could be. But it's fun to speculate, right?

The last name being thrown around is Tom Brady.

Why? Because he's kind of a creep. And obviously he's the owner's star quarterback, so there's a connection. Also, because everyone kind of wants it to be true. But again, no facts, all speculation. If we do find out who this mystery person is, we'll be sure to give you an update.

Guys, Kraft and Brady sharing a kiss on the lips does not mean anything. They're both still very happy in their relationships – I'm sure.

Some fans can't believe it.

I mean, the guy is 77 and when his wife died 8 years ago; he started dating someone 39 years younger than him less than a year later. I don't find this particularly surprising.

Other fans are... kinda into it.

Nothing like a good healthy dose of schadenfreude to start your weekend.

Still more are confused that Kraft didn't just go to Disney World like all the other Super Bowl MVPs.

Would probably cost a lot more money, to be fair...

Some fans just aren't buying it.

Some people are just happy to lump in all the other Patriots controversies.

And then... any excuse to show this GIF.

I wish I knew what was going on here, but I sincerely have no clue. Everyone looks so uncomfortable.

Some people are outright disgusted.

Yeah, it's pretty gross, considering the guy's a billionaire and could probably fly somewhere where sex work is legal and regulated, protecting the women that are involved if he really felt like he needed to.

Let us know what you think.

Should Kraft lose his job, or is this pretty low-key compared to what some other NFL players do? Should owners be held to a higher standard? We want to know!