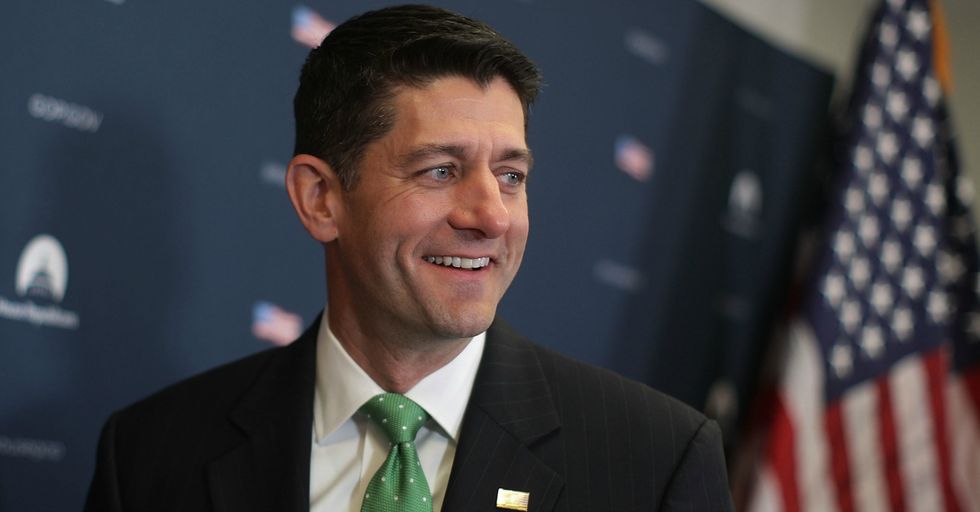 Earlier this week, Senator Ted Cruz tried his hand at making a few jokes. It did not go well.

Speaker of the House Paul Ryan must have been taking notes. At last night's Al Smith dinner, he tried out a few jokes as well, roasting Donald Trump. They also didn't go very well. Seriously, it's like we're in the middle of a comedy battle between two of the least funny people in the country. There's something truly bizarre about watching Paul Ryan test out his comedy chops.

Traditionally, the politicians who speak at the Al Smith dinner try their best to be entertaining. Some are even downright funny.

Paul Ryan at Al Smith Dinner: “Enough of the applause. You sound like the Cabinet when Donald Trump walks in the ro… https://t.co/aHifI6VXu3
— Nick Knudsen 🇺🇸 (@Nick Knudsen 🇺🇸)1508507289.0

The dinner is also a charity event to benefit "the neediest children of the Archdiocese of New York, regardless of race, creed, or color." You might remember reading about last year's event, which both Donald Trump and Hillary Clinton attended. Back when life seemed a bit simpler and there was more hope to go around. This year, it was just a bunch of awkward jokes.

Here are a few zingers from Paul Ryan's speech:

Ryan chose to roast the president with several jokes. "Every morning, I wake up in my office and I scroll Twitter to see which tweets that I will have to pretend I did not see later on," he said, referencing Trump's love of tweeting — and also that he apparently sleeps in his office? He also claimed to have things in common with Sarah Palin, such as being able to "see Russia from the House" — kind of an odd joke when you consider current investigations.

Are you laughing yet?

If not, we don't blame you. Paul Ryan isn't exactly a comedic genius.

Some people are pointing out that there's something deeply unsettling about Ryan's roast. (Besides how awkward it is.)

Listen to his jokes. Paul Ryan knows @realDonaldTrump is a danger to our country. He just won’t do anything about i… https://t.co/Dtofpe2gVE
— Randy Bryce (@Randy Bryce)1508509335.0

Ryan appears to have no qualms about roasting Trump, but many think he's part of the problem. He continues to support Trump's plan for tax reform and repealing the Affordable Care Act, and seems to find it easy to shrug off any responsibility for Trump's outrageous behaviors. What do you think? Are the jokes simply jokes? Or is there something more devious at play here?