Psychologists hold many theories over our somewhat irrational fear... | 22 Words 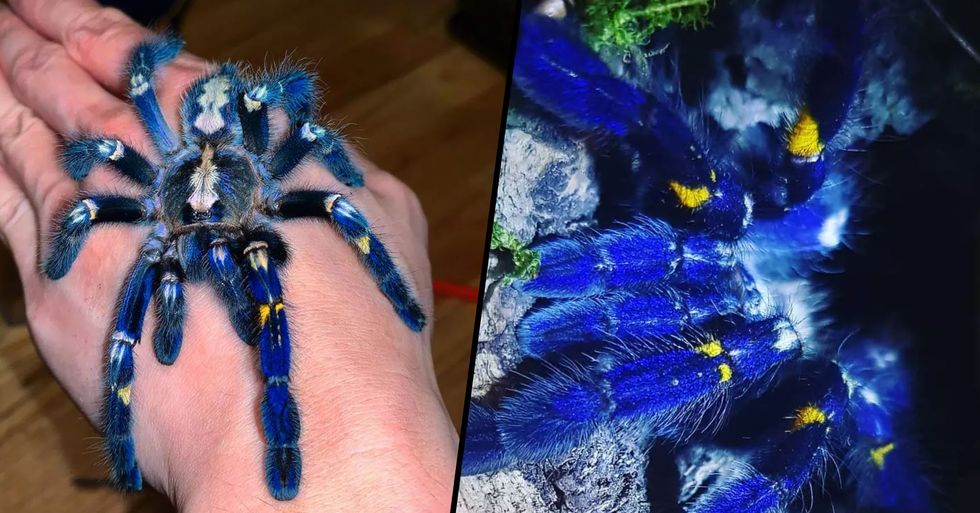 'Peacock Tarantulas' Are So Striking That They're Actually Kind of Pretty

Well, we never thought we'd say this, but it turns out there's a breed of tarantula that is actually kind of... pretty.

It's probably the most common phobia...

Arachnophobia, or more commonly known as the fear of spiders, affects a staggering percentage of people here in the U.S.

But why are we so scared of the creatures?

Considering that (most of) these insects are relatively harmless, it seems quite silly that we freak out so much over them... Doesn't it?

Psychologists hold many theories over our somewhat irrational fear...

Some suggest that arachnophobia was a survival technique for our ancestors and that the fear has simply been conditioned into us throughout generations.

Though not all psychologists believe this...

As some feel that arachnophobia is more likely based on cultural beliefs about the nature of spiders.

But, whatever the reason may be...

The fact remains that hundreds of thousands of us are completely terrified of the eight-legged arachnids, and nothing about that is going to change anytime soon.

Though we do have to count our blessings...

Because we live in a country where most of our eight-legged critters can be caught with a drinking glass and a piece of paper.

This isn't the case in some countries...

Nope. Some places bring with them some monstrous, home-invading spiders that are too big for the old glass and paper trick.

And there's one country that instantly springs to mind...

The country is notorious for its massive creepy crawlies...

But perhaps the most formidable of them all is the famous Huntsman spider.

Huntsman spiders are probably the most feared spiders in Australia...

Even though they're mostly harmless (which is a rarity in that country...) their sheer size and speed have gained them quite the reputation.

A typical Huntsman's leg-span can reach fifteen centimeters, while some have been known to reach thirty centimeters.

But Huntsmans are generally quite respected in Australia...

The spiders, which tend to live in the woods and warm, tropical climates, are excellent forms of pest control, as they keep cockroach and mosquito numbers at bay.

And they pose no threat to humans.

Nope, despite how formidable they may look, the Huntsman spider isn't venomous, and very rarely bites humans. Instead, they take shelter and hide until the coast is clear.

But none of this changes the fact...

That they're simply terrifying to look at. Sorry, it's just a fact.

But it seems there are some exceptions... kind of.

A certain breed of tarantula is taking the internet by storm for being, well, sort of pretty.

We know what you're thinking...

People might have them as pets, but there's certainly nothing cute about them. Well...

We say "sort of pretty" though, because, well, they're still a little creepy to look at.

We certainly wouldn't want one crawling on our hand, that's for sure!

Oh, did we mention they're venomous?

So don't go poking one.

Unsurprisingly, they are very popular in the pet trade.

And sadly, the species is considered "Critically Endangered," with the population continuing to decrease. Nevertheless, we think we can admire their color from afar... Want more like this? Scroll on to watch the terrifying moment a huge hawk wasp carries off a huntsman spider for a feast in Australia...