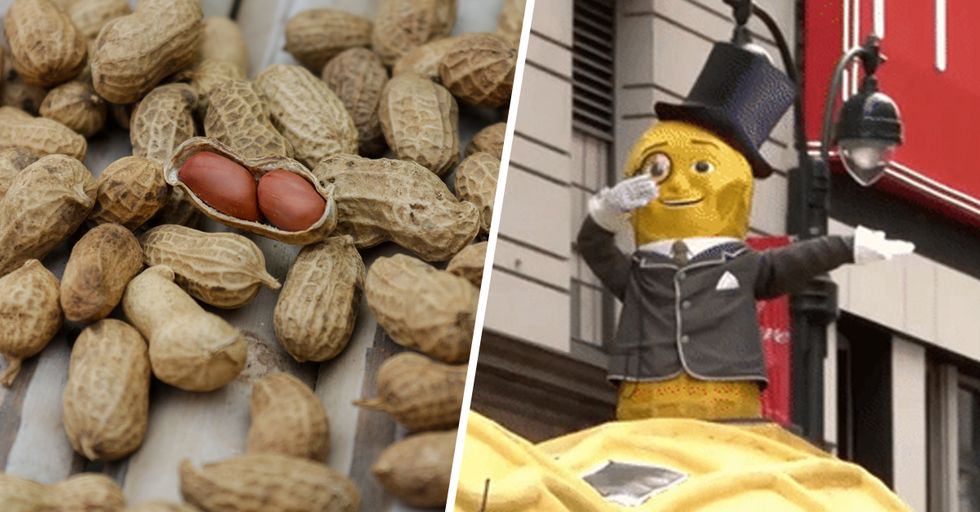 Peanut Allergies Are About to Be a Thing of the Past, Say Scientists

Food allergies suck. Whether you suffer from a severe allergy or a mild one, the fact of the matter is that they're really frustrating and often times scary. It's stressful to constantly have to double check ingredients and to make sure you don't ingest something that could be harmful to your body. It's scary when you break out in hives or your throat closes up or you feel nauseated.

FOOD ALLERGIES ARE ABSOLUTELY NO FUN.

So wouldn't it be wonderful if someone told you that you could potentially get rid of your food allergy? For those who deal with a food allergy, this would be good news, right?

Well, it's not too far off from happening, at least when it comes to peanut allergies.

An exciting new study reveals that there is a possible peanut allergy remedy.

The new remedy poses both hope and risks. So, before you start guzzling peanuts, take a look...

The New England Journal of Medicine published a study last week about the peanut remedy.

Is this the beginning of the end for peanut allergies? Two-thirds of children with who took this promising new med… https://t.co/jjP05JPoSI
— Bloomberg Opinion (@Bloomberg Opinion)1542657705.0

After a year of treatment, two-thirds of kids who took the medicine provided in the study were able to eat small amounts of peanuts. It's not a cure, but it's a start.

If approved by the U.S. government, it could make the lives of kids who suffer peanut allergies both safer and easier. The medicine could have huge commercial potential.

While the treatment, from Biotechnology company Aimmune, is exciting, there are side effects.

The treatment doesn't target the root of the problem. It's not an antibody. In actuality, Aimmune has taken a pre-existing allergy protection method and exposes children to de-fatted peanut flour to desensitize them.

Aimmune creates capsules that can then be mixed into food.

The dosage of the medicine increases over six months. The goal is to protect those with the most severe reactions.

The study showed that this is very effective for children with peanut allergies.

The whole point is for the treatment to protect those against deadly exposure to peanuts. Those with peanut allergies could then potentially live a less fearful life, constantly on edge about accidentally eating something that could be fatal.

Peanut allergies are also getting more and more common in America.

A recent study suggested that there has been a 21 percent increase in peanut allergies since 2010.

The treatment isn't the easiest thing to go through, however.

Over 10 percent of children in the study had to drop out due to their side effects from the medicine.

Investors worry that the side effects could limit the commercial opportunity.

Though it's not without fault, it's an exciting step for science and health. Hope is some of the best medicine out there.

So why exactly is a peanut allergy so stressful?

Well, for one, it's not just that you have to worry about eating peanuts. You have to be careful with products like soap, makeup, and deodorant.

You also have to diligently read every single label.

Who wants to spend their time reading labels? Besides being afraid for your life, you have to read everything before ingesting it.

Having to ask your waiter about ingredients is also tiresome.

It's hard to not feel bad about it, either. It's easy to feel like you're annoying them, even though you have to be diligent.

Packaging can make a huge difference.

@mmschocolate changing the color on your packaging for Halloween candy is dangerous! My son has a peanut allergy a… https://t.co/KgnbArtzeY
— Nicolas Bellenbaum (@Nicolas Bellenbaum)1541896004.0

Most of us don't think twice about the packaging on candy. For those with severe allergies, it can be the difference between life and death.

How about the option where there are zero peanuts? That sounds great.

The worst part is, you can develop a peanut allergy later in life.

One day peanut butter can make you feel sick, out of nowhere. The injustice of it all!

The most random things can contain peanuts.

Treats and snacks you would never think have peanuts in them can contain the ingredient.

Luckily, there are options out there if you have to avoid peanuts.

Having a severe allergy makes you hyper-aware of what you're putting into your body.

Which is ultimately a good thing, as annoying as it is to read ingredients over and over again.

It's important to be really careful when reading ingredient lists as well.

Most of us take for granted the fact that if we don't have a food allergy, we never have to stress about something being incorrectly labeled. It can be a very stressful situation.

It's also super hard to be vegan or vegetarian with a nut allergy.

For those with meatless diets, nuts are an excellent source of protein. Nuts are used in tons of vegan and vegetarian recipes.

It's also so annoying for people to look at you and say, "Can I eat this near you?"

Nobody wants to have that question constantly asked. It puts you on the spot and makes you feel like you're being a total inconvenience.

And while there is nothing fun about a peanut allergy, there is actually a very helpful community on the internet for people who can't eat peanuts.

Others can chime in with whether they've used the product or not.

The posts are super helpful and informative.

One thread lists out safe restaurants to dine with a peanut allergy.

It's always good to know where one can go to safely eat.

There are also people dealing with a peanut allergy for the first time and asking advice.

Who knew the advice of strangers could be so valuable?

There's nothing fun about a peanut allergy.

It can be really stressful and scary. But there's comfort knowing that there is hope.

Science is making major strides, and there are tons of resources online for anyone new to a peanut allergy.

Even just perusing the hashtag "peanut allergy" on Twitter or Instagram can lead to posts from people offering nut-free products or sharing their own stories.

There's a whole community of people struggling with peanut allergies.

And for those of us without them, it can't hurt to educate ourselves about the allergy.

We could potentially be putting someone in danger without even knowing it!

Knowledge is power! Share this with your friend who loves reading about scientific studies.