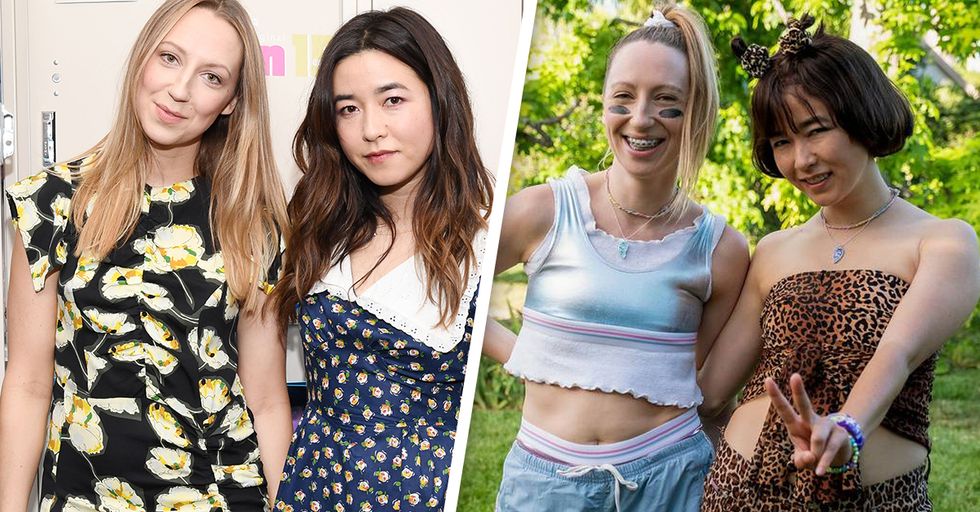 It is the year 2000. You run your teeth over your braces and pull a polo shirt over your long-sleeve t-shirt, then pull up your flare jeans and fasten your studded belt. You shake out your recently Herbal-Essences-washed hair and put it in a low pony, carefully pulling out two strands to perfectly frame your face. You tweeze your eyebrows into oblivion until they are pencil-thin and make you look perpetually surprised. You are officially ready for your first day of seventh grade.

If this sounds remotely like you when you were a preteen, then Hulu's new show, Pen15, is literally made for you. It is a heartwarming, cringe-worthy, way-too-real account of two awkward girls simply trying to survive middle school in the early 2000s, and it is way too perfect. Like, I had to stop watching after three episodes because it was too real and it was bringing up lots of memories and making me super uncomfortable. Pen15 really is the best.

The show's brilliant creators, Maya Erskine, and Anna Konkle are also its stars.

Yes, they are full-grown women in their early 30s playing middle schoolers. And it totally works.

Maya and Anna play... Maya and Anna, the seventh-grade versions of themselves. They are best friends and awkward nerdy members of their grade just trying to navigate seventh grade without totally ruining their lives.

Pen15 is ultra brilliant because all the other actors in the show are actual middle schoolers.

It makes the show that much more hilarious, and it serves to heighten the awkwardness that Maya and Anna feel and cause.

Like, to an accurate, cringe-worthy degree. It's actually hard to watch sometimes.

But it is 100 percent the show every former middle school girl needs right now.

It's Freaks and Geeks, but it focuses on middle school girls. It's completely new and revolutionary that way.

The show PEN15 is hilarious and I highly recommend it to any girl who wants to relive the horrors of middle school
— lindsay k (@lindsay k)1549660007.0

...Which is not something I really thought I ever wanted to do, but it's totally cathartic and relatable in the best way.

Did you ever, for example, cut your own hair?

The night before your first day of school? And so you ended up with a terrible bowl cut that haunts your nightmares to this day?

Or did you spend hours toiling away on AIM?

Trying to come up with the perfect away message? That was mysterious and yet alluring?

Then this show is for you.

It really covers the gamut of middle school life, specifically in the early 2000s. As someone who was in seventh grade at this time, this show speaks to me on a deep level.

It's super funny, yes, but it is also really real.

It's insanely specific. Like, did they go into my brain...or worse, my diary...from my middle school years?

Some of the things Maya and Anna say literally came out of my mouth verbatim years and years ago.

And it turns out other fans feel the same way. The show has definitely hit a nerve with people everywhere.

It's a total hit.

I could tell that I was going to fall in love with it in the first two minutes.

There are seriously some moments and scenes from the show that will be burned into my memory forever.

No spoilers, but Maya's solo at the band concert is one for the history books. Seriously.

Pen15 has so many wondering if Maya and Anna went into their personal histories.

I don't know what it was like for you, but seventh grade was the worst year of my life. I was perpetually uncomfortable.

And until now, I haven't seen myself like this on screen.

TV critic @carolineframke writes that #Pen15 feels like "watching a show entirely about the “freaks” from “Freaks a… https://t.co/udRDNzVukk
— Variety (@Variety)1549677600.0

Sure, there have been shows about middle schoolers, but most of them aren't written by women and about women.

While adult women who grew up in the '90s and 2000s are the target audience for Pen15, we're not the only audience who connects with the show.

Between Pen15 and Big Mouth and Sex Education, there's no shortage of shows today that deal smartly with sex stuff.

Everything about the show is super nostalgic.

Not just the plot points but the sets and the wardrobe too. We all wanted a clear phone when we were growing up.

Take a break from whatever show you've been watching and watch PEN15 on Hulu. It is beautiful and perfect, especial… https://t.co/aUmcPzHrL8
— Veronica de Souza (@Veronica de Souza)1549902623.0

Veronica wrote, "If you've ever owned a pair of cargo zip-off capris from Limited Too this show is for you." Wow.

Notice that there are three "weirds" in that tweet. It's true. But being a middle schooler is weird. The weird is real.

This show also inspired people to share their own middle school pictures.

Which, while probably unintended, is totally a perk. This is perfect!

This girl totally would have been friends with Anna in middle school.

They have the same thin eyebrows and desperation to be cool. We all had that.

Oh man, the strands of hair down the sides of our faces...

Boys were not immune from the awkward preteen years either.

In fact, middle school was the pinnacle of the time when girls were maturing at a way faster rate than boys. We did not look like we belonged in the same grade.

Everything about the show, the scripts, the acting, the branded t-shirts, will dredge up lots of memories.

Sure, it will be traumatizing.

It will bring up memories that you have successfully repressed for some time now. But trust me when I say that it's the best.

There is one unintended side effect of the show:

PEN15 keeps introducing sad/desperate middle school side characters and I am going to spend the rest of my life worried about them.
— Jackson McHenry (@Jackson McHenry)1549919013.0

But the good news is that in real life, I was one of those sad middle school characters, and I turned out OK.

Here's a pretty solid endorsement of the show:

Seth Rogan tends to know what he's talking about, so I would believe him.

Maya and Anna might make you want to die a little bit.

You might have to watch the show from between your fingers because it's so awkward.

But that's what makes Pen15 so incredibly good.

We were all once desperate middle schoolers trying to figure out who we were and how we fit into the world.

And now, well, we haven't figured anything out, but we're doing OK.

And in the end, that's the lesson of Pen15. We all ended up OK. Share this with someone who needs to watch this show!