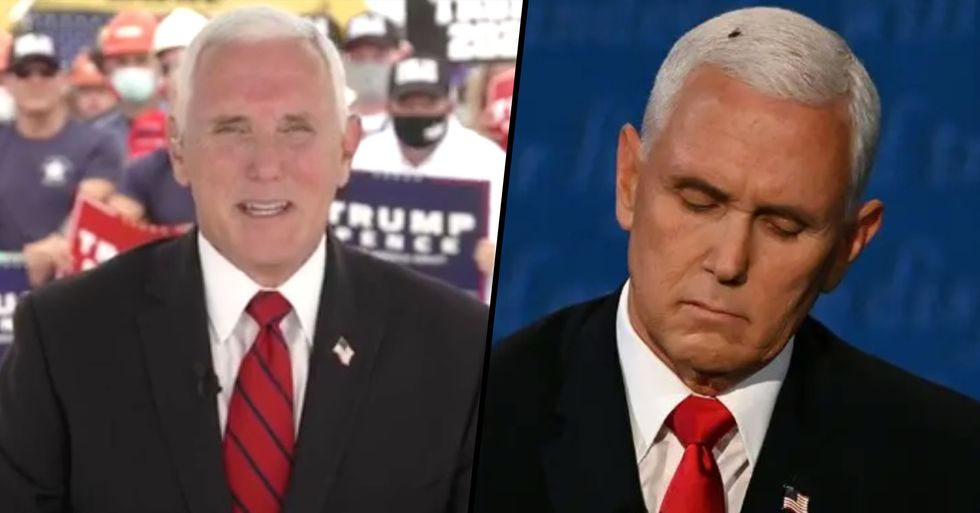 After nearly a week of non-stop memes, Vice President Pence has finally addressed that fly situation...

And his response has shocked many.

Now, the vice-presidential debate was an explosive evening, to say the least. Last Wednesday, Vice President Pence went head-to-head with his Democratic challenger, Kamala Harris, in the year's first and only vice presidential debate.

But, out of all the memorable moments the debate had to offer...

There was one slightly more ridiculous occasion that has stuck in people's minds.

As you are probably aware, a fly landed on Pence's head during the debate...

And viewers were transfixed.

Ridiculously, the fly stayed in its position for over 2 minutes...

As Pence, clearly oblivious to his visitor, continued with the debate.

It didn't take long for the memes to come rolling out...

And now, the internet is simply awash with puns and jokes surrounding the unfortunate mishap.

Who'd have thought one insect could create such a viral snowstorm?

As soon as the brave fly took its spot on Pence's silver head of hair, #FlyGate was quick to start trending on Twitter.

And we have to admit, the reactions and memes have been pretty funny.

We love the internet, sometimes.

It didn't take long for SNL to jump on the fly bandwagon, either.

Actor and comedian, Jim Carrey, who portrayed Joe Biden in SNL's debate sketch, quite hilariously dressed up as the fly in their weekend sketch.

However, regardless of the phenomenon of the fly...

Vice President Pence, who actually made the insect famous in the first place, has had his lips firmly sealed on the matter.

He has avoided the #FlyGate scandal entirely...

Well, until now, he has.

Appearing for a Columbus Day interview with Fox News host, Dana Perino, the Vice-President finally gave his insight into #FlyGate.

And, miraculously, he took the whole thing in good spirits.

Pence, a father of 3 adult children, said he did not feel the fly and only learned of its existence from his kids after the debate. "I didn't know he was there!"

"They all told me, ‘Dad, you did okay’, but they did tell me about the fly. It was a good laugh for all of us."

I suppose the only thing you can do is laugh, isn't it?

However, if you're not bored of the fly just yet, keep scrolling to see just how it was transformed into a hilarious Halloween wig...