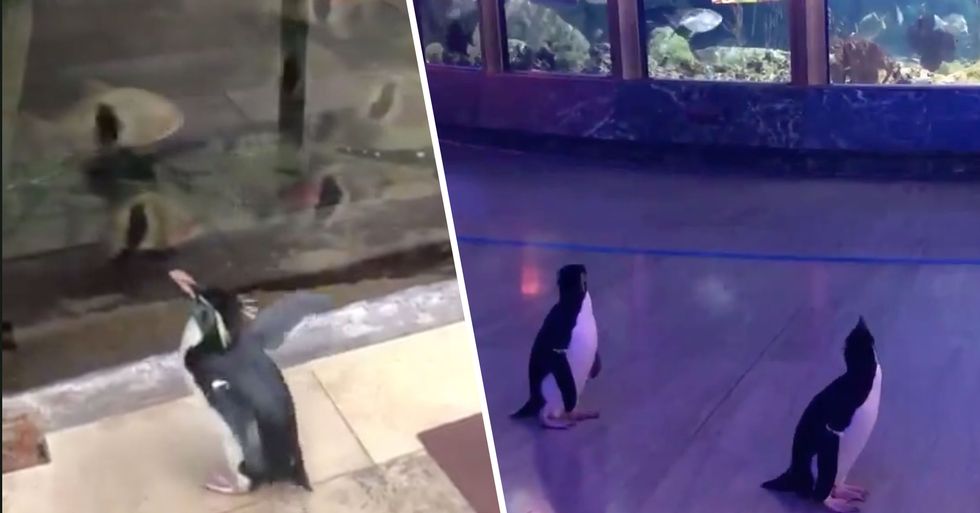 Things have started getting pretty dire in the world, with the travel ban, self-isolation, and toilet paper becoming basically nonexistent. On top of this, many public places have closed to halt the spread of the virus.

Although this is an uncertain time for us, there is one species that is making the most of the current situation...

Penguins! A group of penguins have been allowed to do the most amazing thing while the aquarium has been closed to the public.

More than 100,000 people all over the world have now been infected with the virus...

186,677, to be precise. And, devastatingly, a staggering 7,471 more have been reported to have died from the illness.

And many people have been descending into mass hysteria over the risks the virus brings with it. That's not the case for everyone, however...

For one little penguin colony, things are looking pretty exciting.

An aquarium in Chicago has closed its doors to the public amid the virus outbreak, but it's not all doom and gloom, especially for the penguins.

They have free rein of the entire building!

Shedd Aquarium is currently closed to the public but decided to share a video to Twitter to show everyone what the penguins have been up to.

The video is adorable.

Penguins in the Amazon?! 🐧🌴 Some of the penguins went on a field trip to meet other animals at Shedd. Wellington s… https://t.co/MI2VcIRpVt
— Shedd Aquarium (@Shedd Aquarium)1584294953.0

One of the penguins can be seen having an exclusive tour of different parts of the aquarium.

The aquarium wrote: "Some of the penguins went on a field trip to meet other animals at Shedd."

It didn't stop there!

The adventure continues! 🐧🐧 This morning, Edward and Annie explored Shedd’s rotunda. They are a bonded pair of rock… https://t.co/SlyrshFrCb
— Shedd Aquarium (@Shedd Aquarium)1584393344.0

The little explorers were spotted waddling around other areas of the building, such as information desks, probably trying to get the low down on what's going on.

Penguins like Edward and Annie will begin to build their nests next week. Join us digitally for nesting coverage! I… https://t.co/nG1JT11YDt
— Shedd Aquarium (@Shedd Aquarium)1584393399.0

The birds can be seen embarking in quite the little adventure, with Shedd commenting: "The adventure continues! This morning, Edward and Annie explored Shedd's rotunda. They are a bonded pair of rockhopper penguins, which means they are together for nesting season. Springtime is nesting season for penguins at Shedd, and this year is no different!"

"Penguins like Edward and Annie will begin to build their nests next week. Join us digitally for nesting coverage! In the meantime, we will be sharing lots of different animal updates (and yes, Wellington will return!)"

They wanted to offer people some reassurance that the penguins remain safe.

While this may be a strange time for us, these days feel normal for animals at Shedd. Our caregivers are constantly… https://t.co/lzCj0KVZKZ
— Shedd Aquarium (@Shedd Aquarium)1584393491.0

Saying: "While this may be a strange time for us, these days feel normal for animals at Shedd. Our caregivers are constantly providing new experiences for the animals to explore and express their natural behaviors. Let us know what penguin activities you would like to see"

Can't wait to tune in tomorrow!

I for one am very excited to see what Edward, Annie, and Wellington get up to next.