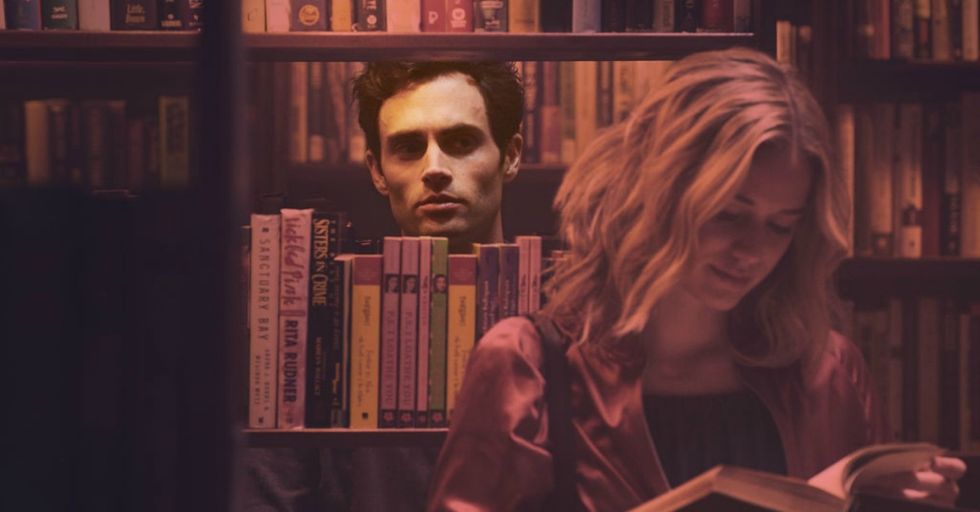 If you haven't started watching the dark, troubling, and insanely addictive new show You on Netflix, prepare to not eat, sleep, or leave your house again until you've finished it.

There's something about the combination of inventive storytelling, disturbing plotline and compelling characters that just make it impossible to turn off, and one compelling character, in particular, is generating a lot of buzz on social media. But, oddly enough, not for the reason you'd expect.

Warning: Proceed with caution. Spoilers below!

If you haven't watched "You" on Netflix yet, you should probably get on that.

Based on the chilling novel by Caroline Kepnes, You is the story of Joe Goldberg's growing obsession with Guinevere Beck.

Joe, brilliantly played by Penn Badgley, is beyond creepy.

After meeting a charming young lady in the used bookstore where he works, his immediate interest soon grows into something much more sinister.

The object of Joe's affection, Guinevere Beck is the ultimate cool-smart-literary chick.

She writes poetry, reads obscure authors, has daddy issues, does the New York Times crossword puzzle and is pretty much the epitome of everything a sarcastic book snob like Joe would drool over.

As his interest in Beck grows, we start to learn more and more about this Joe fellow.

Like, for instance, the fact that he's a complete and total stalker, who somehow thinks he becomes invisible when wearing a baseball hat.

He's also insanely jealous and possessive and thinks that every other man in Beck's life is a threat that must be destroyed.

He's a master manipulator who will do whatever it takes to make sure the woman of his dreams belongs to him and him alone.

We also learn that Beck *really* needs to invest in some curtains or blinds – but that's a tad off-topic.

Hey, your 20's are a free-spirited time where you're allowed to make mistakes and not care how many of your neighbors or strangers on the street have seen you waltzing around in your underwear. At least, that's what I keep telling myself.

So, considering all of his creepy and downright evil behavior, it's safe to assume that people have less than warm feelings about our main character, Joe, right?

Not so much. In fact, shockingly enough, people are going full-on fangirl over this dude all across social media.

One Twitter user tweeted about how, although she found Penn Badgley attractive in his previously iconic role as the likable Dan in Gossip Girl, was downright smitten with Joe in You. Pardon me a moment while I dry-heave.

Thankfully, a voice of reason stepped in to help us all reevaluate the facts – Badgley himself.

Apparently, he heard about all the disturbing words of support for his deplorable character and felt it was his duty to say something. AKA, remind people that Joe isn't just a tortured soul, but a murderous psychopath.

And from what I counted, the death toll was up to four by the end of the first season, which puts him at straight-up serial killer status. But do people care? Nope.

This Twitter user seems to have suffered a "broken heart" from Penn Badgley's portrayal of Joe.

You know who else got a broken heart from Joe? Benji. When he MURDERED HIM.

What is it about him, you may ask yourself?

Maybe it was the dark, sultry look in his eye when he locked Beck in a cage and forced her to pee in a bucket. And who hasn't dreamed of a guy breaking into your apartment and stealing your workout top?

Apparently, being hot allows you to get away with pretty much anything.

Which is, if you think about it, totally ridiculous. Take a moment to replace Joe with, oh, I don't know, a Steve Buscemi-type actor. Not so hot anymore, right? (No offense, Steve. Love your work.)

Badgley wasn't shy in expressing his distaste for what we as a society have become.

Sure, you may be telling yourself, "It's just a TV show! He's not really killing these people!" But the very idea that people are turned on instead of disgusted by the villain in a story is not a great sign.

And, as you'd imagine, the tweets got progressively more and more unsettling.

One Twitter user even asked Badgley to "kidnap" her, which is so wrong on so many levels. Hey, at least she asked nicely?

You see, actors are simply playing their characters, and most often aren't really anything like them in real life. Sure, I don't know him personally, but I'm guessing Penn Badgley has better things to do with his time than smash women in the head with rocks while jogging in the park.

Not only did she compare Joe to a real-life serial killer, but she also mentioned how "bittersweet" it felt while she was "rooting" for Joe's character. Side note: Badgley does look an awful lot like Ted Bundy. And I'm sure he's pretty thrilled that someone pointed that out.

Honestly, I can *kind of* see where these Joe-supporters are coming from.

Because You is a well-written show with multidimensional characters, there are aspects of Joe's personality that are, shall we say, less bad than one might imagine coming from such a terrible dude.

He clearly genuinely cares about him, and while he might have done some questionable stuff regarding his young neighbor (like just taking him out for milkshakes without telling his mother), it added some depth to an otherwise purely evil character.

Also, his quips about Benji were downright hilarious.

Has there ever been a bigger D-bag in the history of television than Benji? I think not. And Joe's distaste for him was all-too-relatable. No, I'm not justifying his kidnapping and eventual murder of Benji, but the events leading up to that were kind of great.

Joe and Beck did seem to have some real chemistry.

For a while, at least. And granted, that was only the "Joe" that Joe allowed Beck to see, so let's take that with a grain of salt.

But does that really make up for the killing, stalking and manipulating?

Luckily, there are still some sane people left in the world who did not find Joe's antics adorable.

One fan commented on the juxtaposition between Badgley's "Dan" character and his "Joe" character, and how impressive it is that he was able to pull off both in such a believable way.

These "toxic norms" that he's referring to seem to be Joe's controlling, possessive behavior and the manipulation that he subjects Beck to, which so many women experience in their real-life relationships.

One user went so far as to request that Badgley go back to playing likable characters only.

She graciously offered an example of a scene from the movie Easy A where he played Woodchuck Todd, the school mascot. Seriously, is there anything more heartwarming than that?

Badgley, however, wasn't having it.

In fact, he vowed to play "polar opposites only" from now on, which seems to be him just further cementing the fact in everyone's minds that he is nothing like his character Joe in real life. Because, apparently, that needs to be clarified.

After binge-watching "You" in the span of one night, I can't say I disagree with this statement.

There's something about that wild look that comes into his eyes when he's trying to cover his tracks that just chills me to my core. Plus, how can glazed be your favorite donut flavor? GLAZED?! Are you kidding me?

As an actor, if you've sufficiently creeped out your audience with your portrayal of a total creep, you've done your job. And Badgley accomplished that in spades.

User @darrenglitz commented on the troubling reaction to the Joe character.

the amount of people romanticizing @PennBadgley’s character in YOU scares me
— evica (@evica)1547062470.0

Romanticizing this behavior is not just unsettling, but damaging. Should we really be hailing a character who does such despicable things to women in order to get what he wants?

Badgley, at least, is using the reaction to his advantage.

That's right, people. In case you weren't aware, the entire cast and crew of You is already gearing up for season 2. Get ready. (But maybe try to shut down those lovey-dovey feelings towards Joe before it comes out.)