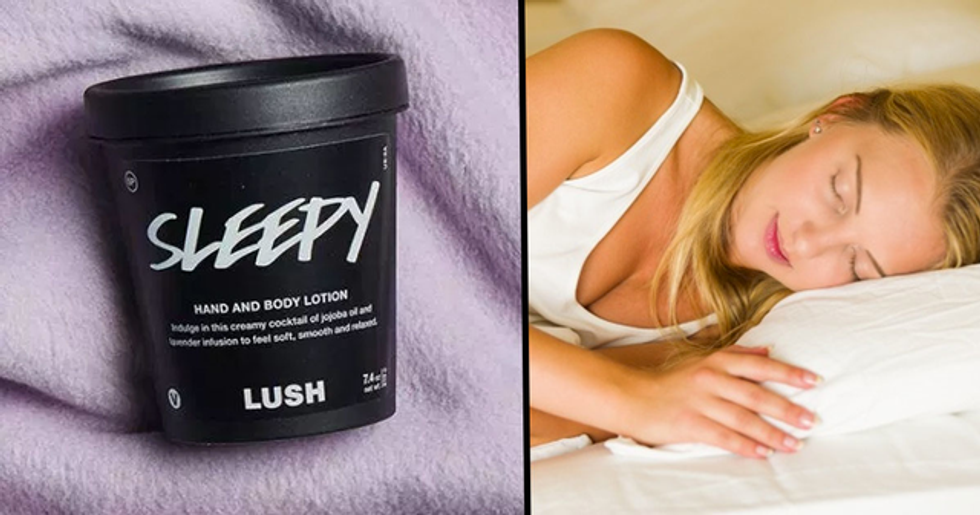 We all know that the secret to a happy life is a good night's sleep. There's no better feeling than waking up from a full night of solid, undisturbed slumber.

The only issue is, getting a decent nights sleep is often easier said than done, with most of us finding ourselves only getting in a couple of hours sleep each night. Instead of gracefully drifting off to sleep, a lot of us will toss and turn for hours before finally nodding off. Not fun.

But what if we told you that a potential miracle cure had been discovered? A new cream has been formulated, and people are claiming that it sends them off to sleep in under a minute... Yeah, this is big news. Form an orderly queue, everyone. This is going to sell fast.

Getting to sleep at night can be tricky business.

As much as we'd love to instantly zonk out, the reality is that drifting off to sleep can take a lot longer than we'd please.

Insomnia is a condition that causes the inability to sleep, and a staggering twenty-five percent of Americans are affected by it.

Though insomnia doesn't have to last forever.

A recent study also found that 1 in 4 Americans develop insomnia every year, though seventy-five percent of sufferers are able to find a cure for the condition.

But how easy is it to find a cure?

There is no exact cure for insomnia as it is heavily dependent on someone's sleeping habits and patterns. Some outlandish methods and techniques have been tested in the past, however...

People have tried all sorts of weird hacks to get some sleep.

The French used to eat an awful lot of fried lettuce, as they believed that the green stuff was a cure for insomnia. Consuming raw onions directly before sleep was thought to be a remedy, also. I'll take no sleep, thanks.

And there were some more spiritual methods...

The famous Victorian writer, Charles Dickens, believed that pointing his bed Northward was the best cure for his insomnia. So, if you find yourself tossing and turning all night, reposition yourself to sleep facing the North. We're not making any promises, though...

Long story short, people are desperate for an effective and natural remedy.

Sleeping pills are by far the most common remedy for insomnia; they're easy to get and are readily available far and wide across the country. However, they carry with them a number of different side effects such as daytime drowsiness and headaches.

Many doctors have advised against pharmaceutical medication.

Taking sleeping pills over a long period of time increases the risk of dependency on the drug so, in the last few years, more natural methods and remedies have been favored over pharmaceutical ones.

Lush has always been the king of natural and organic skin and beauty products, and they have spectacularly swooped into the rescue for insomniacs far and wide.

They have formulated a new cream.

It contains a number of different ingredients...

Lush know how to put their research in. This new formula contains a number of natural ingredients that are known for aiding a natural night's sleep: the main one being lavender.

Lavender has many amazing properties...

And one of its main qualities is its effect on sleep. Lavender is primarily used for it’s balancing and soothing qualities, which makes it an ideal remedy for calming the mind and aiding a night of restful sleep.

Lavender is the go-to for sleep remedies.

Studies have shown that the scent of lavender may slow down the nervous system, which relaxes the body and mind to improve sleep quality. It's also been proven to lower the heart rate and blood pressure, which will put you into a more relaxed state.

A number of other ingredients are also used to make the cream.

Twenty-six other ingredients, to be precise. The complex mix is made primarily with oat milk and almond oil. Oats have been used for years to soothe and relax irritated skin, so they were the ideal choice to make a calming sleep lotion. Other ingredients include jojoba oil, ylang-ylang oil and Fairtrade organic cocoa butter.

It's on hundred percent organic, and only $10!

It's a dream come true! (no pun intended...) Lush pride themselves on only using Fairtrade-approved organic ingredients, and trade only with suppliers which do not test on animals.

And people on Twitter have gone wild for it.

Hordes of people have been reporting back on the product - and the results are overwhelmingly promising.

People are praising the product.

The lotion, which was originally a limited edition product, has been described as "dreamy" and "magical" and has provided amazing effects for those who struggle to sleep. It has now been added as a permanent product due to its initial success.

It works instantly for some...

Some people didn't even make it to bed before they were out for the count. We want whatever she's had...

To accompany the cream, Lush has also formulated a "sleep spray". The formula is a harmonious blend of lavender and tonka, which is the ideal mix to send you to sleep within minutes.

Remedies and solutions for insomnia are popping up every day - the end to your nightmare is nigh! Putting natural products aside, there are also more mindful methods to get to sleep quickly. Take this one used by the US Army... prepare to get your zen out.