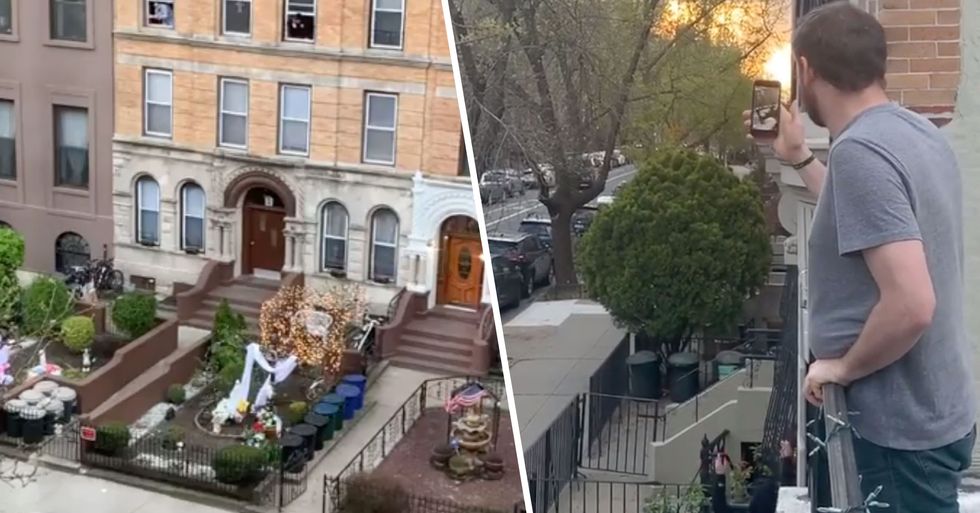 People Across NYC Lovingly Belt out 'New York, New York' From Their Windows

Throughout these dark and uncertain times, our country has been coming together more than ever to support and help one another - in particular, our essential workers.

Keep scrolling to witness the beautiful ways in which New Yorkers have been paying tribute to each other with the help of a Frank Sinatra classic...

New York City is the worst affected part of our country right now...

But New Yorkers have been coming together in the best of ways to get through this critical time. But firstly...

This also includes 34,641 known deaths - the highest number of deaths in one country.

New York is now the hotspot for pandemic cases here in the States.

According to a New York doctor, the number of patients on ventilators "more than doubled" in the last month.

New Yorkers have been keeping their spirits high...

And they have been doing a whole range of things to try and stay united together.

It's clear that officials saw the mistake with their huge flashing siren...

And instead, the entire city has been taking part in a huge round of applause every evening at 7 pm to pay tribute to their healthcare workers.

People have been using the hashtag "Clap Because We Care"...

And even though a round of applause won't magically make the virus go away, it shows people that they aren't alone during these dark and dangerous times.

It is remarkable to see this beautiful city be filled with cheers and rounds of applause...

And this truly restores our faith in humanity.

And earlier this week, something exceptional happened during the applause.

After the downpour of rain and blustery winds died down on Monday night, a double rainbow arched over New York City's skyline, offering a brief moment of peace.

The timing was incredible...

And many of the 8.4 million residents of NYC managed to snap some beautiful pictures of the rainbow.

Many felt this was Mother Nature's way of thanking our heroes.

A rainbow is a symbol of hope...

And that is exactly what the entire world needs right now - especially those working on the front line.

But in the typical New Yorker fashion...

During the daily round of applause throughout the city yesterday evening...

Certain individuals took to their windows and doorsteps to sing and play Frank Sinatra's "Theme From New York New York" to pay some extra honor to all of the essential workers.

It was a city-wide event...

Led by the all-volunteer Peace of Heart Choir, New Yorkers tuned into the event's Facebook page and two local radio stations, WKCR (89.9FM) and WBAI (99.5), to synchronize with their fellow singers.

"As choir members, we know that singing brings people together," Andrew Dykeman, the co-chairman of Peace of Heart Choir, in a statement. "This is our way of sparking a greater sense of community, while still maintaining an appropriate physical distance. We can raise our voices together to honor those who risk their lives every day to keep us safe and cared for. We welcome other choirs and singers of all ages, and from every neighborhood, to join in."

And especially for those who are self-isolating alone, this was a truly joyous moment.

New Yorkers have never been prouder...

And this truly demonstrates how, as a nation, we are determined to fight back against this deadly virus.

For more on how we are coping as a country...