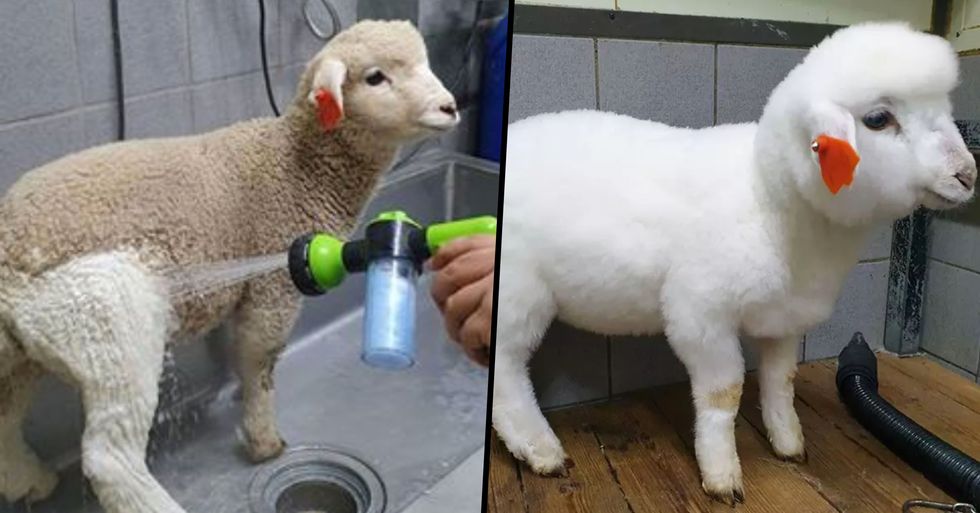 A sheep café is taking the internet by storm, and it's not hard to see why.

The images are the cutest thing we've seen...

You've all heard or cat or dog cafés...

But, have you ever been to a sheep café?

Well, one group of people over in Korea decided to combine sheep and coffee.

And thus, Thanks Nature Cafe was born.

Situated in Seoul, it's one of the city's oldest animal cafés.

The café opened its doors back in 2011, back when the trend of animal cafés was just starting to take off.

This café is slightly different from the rest.

In one of them, you can drink your coffee (or whatever drink of your choice) and eat some dessert, while in the other - you get to meet and pet some lambs.

The menu is full of sweet treats.

There's something for everyone.

But of course, the fun happens when you've finished your drink or food.

Customers can come to the separate pen outside the café...

Here, they can pet the adorable, fluffy sheep that live there.

As you can imagine, nobody can possibly resist their cuteness.

The Thanks Nature Cafe has even been named as 1 of “the 9 cutest animal cafes in the world" by Smart Travel website.

The cafe’s owner, Lee Kwang-ho, says he's surprised by the newfound internet fame. “I don’t know how this place was known to the world, but I had visitors from all over the world coming to see my sheep, from Macedonia, Saudi Arabia, New Zealand, even some countries I don’t know well."

And the sheep seem to be lapping up all the attention.

They are the cutest things we've ever seen.

People come from across the globe to visit the sheep.

It's certainly not your typical animal café.

Not that we're complaining!

But there's one specific reason why the café is gaining so many fans across the world...

A set of pictures recently went viral of one of the lambs living in the café, and they truly captured the hearts of the internet.

The snaps show the lamb having a shower.

Currently, there are 2 lambs residing at the café - William and Bentley.

The pictures show the before and after one of these lambs getting bathed.

It's quite the glow up, we have to say!

The first snap shows this beige, curly lamb getting hosed down.

And shows the process of her being transformed into a white snowball of fluff.

This is one hell of a before and after.

Look at that transformation!!

If you're a fan of lattes and lambs, it's safe to say that this café is a must-see in the city.

To check out another incredible animal café, scroll on...