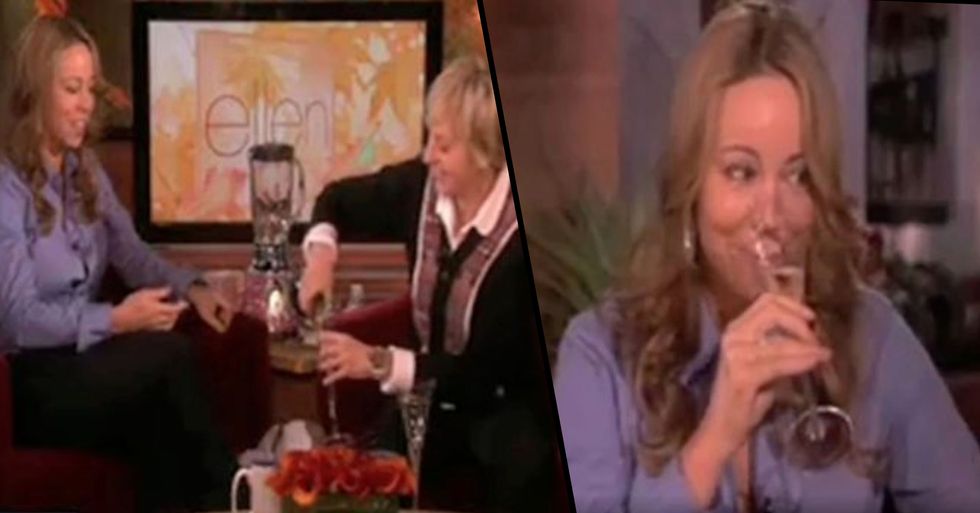 Rumors about the true nature of the seemingly warm and bubbly Ellen DeGeneres have been circulating the internet for years but only now are people choosing to pay more attention to them.

A clip has resurfaced from 2008 showing Ellen "forcing" Mariah Carey to reveal her pregnancy in the most brutal way, and fans aren't happy...

Her behavior is shocking, and a retro video from the early days of The Ellen Show with Mariah Carey have left fans outraged. But firstly, let's see what her former employees had to say...

1. Ellen clearly doesn't care too much for writers strikes.

For a colleague's birthday, Twitter user, Alison Freer, was celebrating with a BBQ outside of the Warner Bros studios where The Ellen Show is filmed. However, Ellen was quick to shut down all the festivities by sending someone over to put a stop to the celebration, all because she doesn't eat meat. Not cool, Ellen.

5. She reportedly sacked someone for talking to her too much.

6. Ellen doesn't want any of her celebrity buddies to mingle with the common folk.

8. She apparently chooses someone new to "hate."

9. Staff members are reportedly encouraged to cheer her up when she's in a bad mood.

10. Her compassion for animals strikes again.

11. She's notoriously picky with her scripts.

12. She reportedly refused to pay tribute to Joan Rivers...

13. Ellen apparently hates her own fans.

14. She tried to get a waitress fired. Apparently.

This social media user claimed that her friend was once working in a restaurant where Ellen was dining. She claims that Ellen attempted to get a waitress fired after she discovered she'd broken a nail? Weird.

15. She has no respect for her current staff.

In a recent, weird segment on her talk show, the sixty-two-year-old rated her staff's babies after telling us "my staff [have] a lot of beautiful additions to their families. Clearly they had to be rated." Did they Ellen? Did they really?

She listed her staff's newborns and gives them all a numerical number.

She began to score her e-commerce manager’s baby girl named Bo: "Well, she looks a little confused which is a very appropriate expression right now so that’s plus eight points. She doesn’t have any products from out Ellen Shop by her, so that’s minus two points."

But then she said awarded the baby with twenty points saying all the merch was sold...

I guess that makes it okay then?

She continued on her rating spree.

The next baby in the line up was her executive producer Derek’s grandson, named Javi: “Derek had that same look when we told him he had to figure out how to shoot this show via Zoom. The family resemblance is plus six points. I’m mad that I can’t pinch his little fat rolls while we’re in quarantine so that’s minus two points," Ellen said.

But in true Ellen fashion, the highest score didn't go to a baby...

It went to a dog, in particular, her associate producer’s "baby" called Gambler. People just weren't on board with this idea at all.

This user referred to it as "disturbing."

While this user described her behavior as "mean."

@TheEllenShow This is mean. I have felt for a long time that your obsession to scare people and then laugh at them… https://t.co/KyQ1W7Jhhf
— patty weinmeister (@patty weinmeister)1590494821.0

But the clip that has gotten everyone talking dates all the way back to 2008...

Mariah Carey was the guest of honor on The Ellen Show, and now that people are looking back on it, they are finding themselves feeling horrified over Ellen's treatment of the singer.

Ellen is seeing persistently asking Mariah, "Are you pregnant?"

To which the singer responds with, "I don't discuss that!"

Rather than respect the fact that Mariah doesn't want to discuss her personal life, Ellen decides to get crafty...

"Okay, you don't have to answer that... but let's toast with some champagne!" she says as she grabs a bottle of the alcoholic beverage along with 2 glasses.

"I can't believe you did this to me," Mariah says as Ellen pours the champagne.

"What?" Ellen asks in mock confusion, "I'm not gonna ask you if you're pregnant."

"Let's toast to you not being pregnant!"

Then, unbelievably, Ellen forces a glass of champagne in Mariah's hand and says "go ahead!" when the singer is clearly trying to dodge drinking the alcohol.

Mariah then says it's too early for her to drink, in which Ellen cheers and says "you're pregnant!"

Even though the audience is laughing and cheering, the way in which Ellen is behaving towards her is nothing but manipulative and controlling.

She blatantly forced Mariah to admit to her pregnancy, even though she clearly wasn't ready to go public with her personal news...

And to make things worse, just weeks after her appearance on the show, she sadly suffered from a miscarriage.

The only time Mariah spoke about her experience on The Ellen Show was when she announced her pregnancy in 2010.

She said at the time, "Yes, we are pregnant, this is true! It's been a long journey. It's been tough, because I've been trying to hold on to a shred of privacy."

She also spoke of her miscarriage...

"It kind of shook us both and took us into a place that was really dark and difficult. When that happened ... I wasn't able to even talk to anybody about it. That was not easy."

Of course, former Ellen fans have been left outraged over the way she treated Mariah on the show...

And people are expressing their new opinions on the controversial talk-show host.

There's no denying that Ellen's behavior in this clip was nothing but manipulative...

And it really goes to show her true colors.

And for more on Ellen Degeneres, keep scrolling to read about how she embarrassed an audience member in front of the entire country...